Round up of Iran Protests: Protests Indicate an Explosive Society 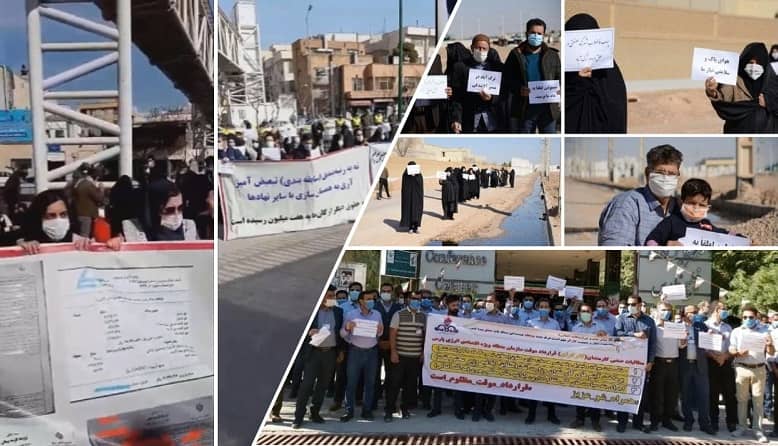 Reports from Iran tallied by the People’s Mojahedin Organization of Iran (PMOI/MEK) indicate dozens of protests in only four days across the country by all walks of life. These protests reflect society’s explosive state.

Again, on Tuesday, stockholders held a gathering in Vanak square in Tehran after the security forces prevented them from gathering outside the SEO building in Tehran.

Due to the regime’s economic mismanagement, Iran’s Stock Market Exchanged bubble growth finally burst on January 24. As a result, many people lost the life savings they had invested in the stock market, so there were large protests in Tehran.

On Monday, the people of Turkabad in the Ardakan district of Yazd province, central Iran, held a rally protesting air pollution and the regime’s inaction regarding this crisis. Locals said that “for a long time, Ardakan Industrial Town has been discharging the sewage of companies in the roads and aqueducts near the city. The canals in the area have been flooded, and the aquifers have been destroyed. Currently, industrial sewage passes through the city like a flood, and the stench has created health problems for locals.”

On February 1, Employees and retirees of Homa Airlines held a rally in front of the company, protesting and demanding their unpaid salaries. They held a sign which read: “We, Homa retirees, demand justice on the issue of equalization of salaries, and we will not give up until our right is realized.”

On Monday, Pars Energy Special Economic Zone Organization contract workers in southwest Iran held a gathering protesting their low wages. They also protested the negligence of the National Oil Company and the Ministry of Oil in implementing the directives to improve contract workers’ employment status.

On Sunday, a group of contract teachers held a rally in front of the regime’s Parliament, protesting huge differences between their salaries with other teachers. They held a sign which read: “The poverty line is 10 million tomans, our salary is 2 million tomans.”

On Sunday, the instructors of the literacy movement gathered in front of the parliament building, simultaneous with examining the plan to determine their employment status.

On Saturday, a group of Iran Khodro employees in Tabriz, northwest Iran, went on strike and protested not receiving their salaries for months and the dismissal of a number of their colleagues.

On Saturday, the regime’s vice-president, Eshagh Jahangiri, went to the Khomeini Port in southwest Iran. Locals protested his presence, and videos showed people shouting at him.
With the growing number of protests across Iran, the state-run media warn officials of another uprising.

While referring to the recent protest in Khomeini port to Jahangiri’s presence, the state-run Vatan-e Emrooz daily on Sunday acknowledged that “people’s protests when they meet officials have become a habit.”

“Certainly, the point that we should not ignore is the accumulation of anger that has arisen among the people, especially in deprived and remote areas. There have been several examples in recent months that should be taken seriously as warnings,” Vatan-e Emrooz added, warning the regime’s officials.