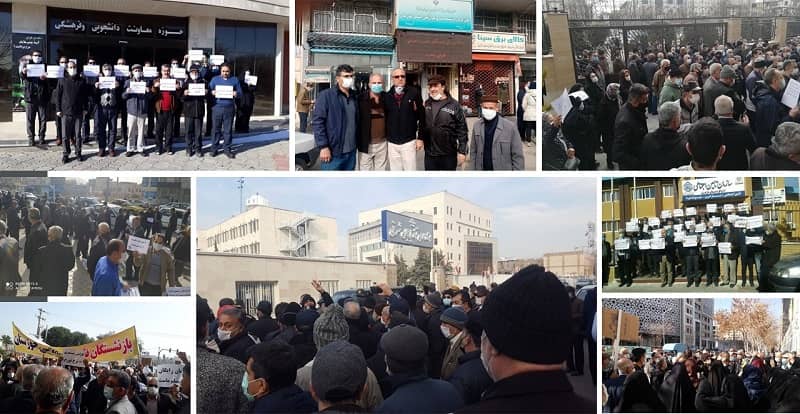 On Tuesday, January 26, according to reports tallied by Iran’s main opposition group, the People’s Mojahedin Organization of Iran (PMOI/MEK), large rallies were held in major Iranian cities by retirees and social security pensioners, based on a previous call to protest.

Most of the protesters are unable to work or earn any more during their retirement and suffer from difficult living conditions and illness. The demonstrators protested the meager pensions they receive and their inadequacy. Some of the slogans in these protests included: “We will not give up until we get our rights,” “We cry out against injustice,” “Our rights are only achieved by taking to the streets,” and “Our tables are empty, enough with the promises.”

The regime’s security forces attacked the rallies which was organized by the social security retirees and pensioners in different Iranian cities.

Mrs. Maryam Rajavi, the President-elect of the National Council of Resistance of Iran (NCRI), hailed the arisen retirees.

“Hail to the deprived retirees in Tehran, Kermanshah, Qazvin, Karaj, Sari, Rasht, Ahvaz, Neyshabour, Khorramabad, Ilam, Arak, Isfahan, Tabriz, Mashhad, Ardabil, and other cities across Iran,” wrote Mrs. Rajavi in her message. She mentioned that the Iranian retirees held protests with chants of “our baskets are empty, enough with hollow promises” and “people are fed up with high prices and inflation.”

Other protests across Iran

On Monday, a group of farmers and their families in Isfahan held a rally and marched toward the governorate, demanding their rights to have irrigation water. Farmers chanted: “Authorities should be ashamed of their conduct.”

The protesting nurses said that the hospital officials, despite numerous protests by medical staff, are not willing to implement the directive issued to increase the salaries of the employees. Despite the coronavirus outbreak and their hard work during the pandemic, the regime refuses to help medical staff, as part of its inhumane coronavirus policy.

In a similar development, nurses of Milad Hospital in Tehran held a rally protesting their low wages and inadequate working condition, for the second time in a few days.

On Sunday, a group of contract teachers, mostly women, held a protest in Sirjan, southeast Iran. These teachers demand a full contract and are protesting their job insecurity.

The drivers of Shahdab Company, who have been working in Yazd province, gathered at the door of Bafgh city governorate on Saturday morning, after they were not allowed to enter the mine where they work.

These drivers went on strike earlier in January for having a low salary. They receive between 1 to 5 million tomans per months. Meanwhile, according to the state-run media, the poverty line for a family of four is 10 million tomans.

On Sunday, Baluch citizens staged a protest in front of the Iranshahr Noor Grand Mosque to protest the destruction of the Sunni mosque by security forces.

The Iranian regime’s forces on January 23 destroyed the foundation of the Sunni prayer site in Iranshahr, in Sistan and Baluchistan province in southeast Iran.

In a similar development on January 24, repressive forces attacked locals and shopkeepers in Kolahdooz region in Iranshahr under the pretext of combatting smuggled fuel. They opened bird fire on innocent people. These criminal actions caused several protests by locals in Sistan and Baluchistan province.

With growing public dissatisfaction and protests across Iran, the state-run media now warn officials of another nationwide uprising.

“Living problems and feelings of discrimination and inequality have become two important areas for creating and increasing social anger. This anger can lead to blind violence and is like pouring gasoline on the flames of anger,” wrote the state-run Vatan-e Emrooz daily on Tuesday.

Aftab-e Yazd daily on Tuesday also warned the officials: “There are social harms. Ignoring them will have irreparable consequences” for the regime.