Teachers in northern Iran protest for their rights 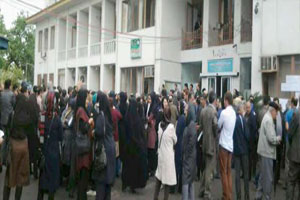 NCRI – A group of teachers from Gilan Province, northern Iran, on Monday protested outside the local branch of the regime’s Education Ministry in the city of Rasht.

There was a strong presence of female teachers among the protesters.

On September 22, on the eve of the new Iranian academic year, Mrs. Maryam Rajavi, the Iranian Resistance’s President-elect, hailed Iran’s university and high school students, teachers, and professors as “future makers” and wished them a fruitful year with more extensive protests and advancement on the path of freedom and emancipation of the people of Iran.

Previous articleIran: Rouhani is cut from the same cloth as other mullahs, prominent dissident
Next articleWhite House suppressed evidence of Iranian regime’s terrorism