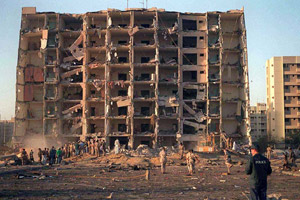 The United States government in the late 1990s gathered enough evidence to send a top-secret communique accusing the regime in Iran of facilitating the deadly 1996 Khobar Towers terrorist bombing, but suppressed that information from the American public and some elements of U.S. intelligence for fear it would lead to an outcry for reprisal, according to documents and interviews.

Before President Bill Clinton left office, the intelligence pointing toward the Iranian regime’s involvement in the terror attack in Saudi Arabia that killed 19 U.S. servicemen and wounded hundreds was deemed both extensive and “credible,” memos show.

It included FBI interviews with a half-dozen Saudi co-conspirators who revealed they got their passports from the Iranian embassy in Damascus, reported to a top Iranian general and were trained by the Iranian regime’s Revolutionary Guard (IRGC), officials told The Washington Times.

The revelations about what the Clinton administration knew are taking on new significance with the recent capture of the accused mastermind of the 1996 attack, which has occurred in the shadows of the U.S. nuclear deal with Iran’s regime.

Ahmed al-Mughassil was arrested in August returning to Lebanon from Iran, and his apprehension has provided fresh evidence of Tehran’s and Hezbollah’s involvement in the attack and their efforts to shield him from justice for two decades, U.S. officials said.

Former FBI Director Louis Freeh told The Washington Times that when he first sought the Clinton White House’s help to gain access to the Saudi suspects, he was repeatedly thwarted. When he succeeded by going around Mr. Clinton and returned with the evidence, it was dismissed as “hearsay,” and he was asked not to spread it around because the administration had made a policy decision to warm relations with Tehran and didn’t want to rock the boat, he said.

“The bottom line was they weren’t interested. They were not at all responsive to it,” Mr. Freeh said about the evidence linking Iran’s regime to Khobar.

“They were looking to change the relationships with the regime there, which is foreign policy. And the FBI has nothing to do with that,” he said in an interview. “They didn’t like that. But I did what I thought was proper.”

Mr. Freeh made similar allegations a decade ago when he wrote a book about his time in the FBI. But since that time, substantial new information has emerged in declassified memos, oral history interviews with retired government officials and other venues that corroborate Mr. Freeh’s account, including that the White House tried to cut off the flow of evidence about Tehran’s involvement to certain elements of the intelligence community.

Chief among the new evidence is a top-secret cable from summer 1999 showing that Mr. Clinton told the regime’s president at the time, Mohammad Khatami, that the U.S. believed Iran’s regime had participated in the Khobar Towers truck bombing.

“Message to President Khatami from President Clinton: The United States Government has received credible evidence that members of the Iranian Revolutionary Guard Corps. (IRGC) along with members of Lebanese and Saudi Hizballah were directly involved in the planning and execution of the terrorist bombing in Saudi Arabia of the Khobar Towers military resident complex,” reads a declassified version of the cable obtained by the National Security Archives group, according to the Washington Times.

“The United States views this in the gravest terms,” the cable added. “We acknowledge that the bombing occurred prior to your election. Those responsible, however, have yet to face justice for this crime. And the IRGC may be involved in planning for further terrorist attacks against American citizens. The involvement of the IRGC in terrorist activity and planning aboard remains a cause of deep concern to us.”

Today, there is little doubt in U.S. circles that Iran and its Saudi Hezbollah arm participated in the deadly Khobar Towers attack, the Washington Times added. Shortly after Mr. Clinton left office, an indictment was issued against Mr. Mughassil that cited the IRGC’s assistance. And in 2006 a federal judge ruled in a civil case brought by families of the Khobar victims that Iran’s regime was liable for hundreds of millions of dollars for its role in the attack.

Former Clinton aides, speaking to the Washington Times on condition of anonymity, said the evidence pointing to Iranian involvement had become substantial by 1999.

The White House opted to downplay the concerns, suggesting in public that the evidence linking Iran’s regime was “fragmentary” or uncertain. Behind the scenes, steps were also taken to restrict the flow of any further evidence that Tehran assisted the Khobar attack, according to interviews with law enforcement and intelligence officials.

At the time, the FBI and the State Department’s intelligence arm were gathering significant new cooperation from Saudi authorities that pointed toward Iranian involvement. But suddenly the flow of information was stopped, officials told The Washington Times.

“We were seeing a line of traffic that led us toward Iranian involvement, and suddenly that traffic was cut off,” recalled Wayne White, a career intelligence officer inside the State Department from 1979 to 2005 who served as deputy director of the State Department’s Bureau of Intelligence and Research’s Office of Analysis for the Near East and South Asia.

Mr. White and other colleagues first disclosed the stopped flow of intelligence during an oral history project for a career diplomats group, and he agreed to recount the details to The Washington Times. During the Clinton administration, his team was responsible for intelligence inside State for Iran, Iraq, the Middle East and North Africa, and was taking a lead role in the Khobar probe as well as evaluating other regional terrorism threats.

When the intelligence flow stopped on Tehran’s involvement in Khobar, Mr. White said he made a “very heated demand up the chain of command.”

“We did not sit idly by and accept this,” he told the Washington Times. “When we found out we and the originating agency were being denied intelligence, we went upstairs to the front office to find out what was happening and to let them know we were outraged.”

Mr. White said his team tried several different ways to try to get intelligence flowing again, including seeking a deal to restrict the information to the secretary of state or a senior deputy. Eventually, he said, he learned the blockade had been ordered by Mr. Clinton’s top national security aide.

“We later found out the stream had been cut off by [then-National Security Advisor] Sandy Berger, and the original agency producing the intelligence was struggling to work around the roadblock,” he said.

Mr. Berger, who later was convicted of trying to smuggle Clinton-era classified documents about terrorism out of the National Archives, now works for a consulting firm in Washington. His office said he was unavailable for comment.

Mr. White’s account was confirmed to The Washington Times by foreign diplomats and several U.S. law enforcement officials with direct knowledge of the matter, including former FBI Director Freeh.

Mr. Freeh said when his agents returned from Saudi Arabia in 2000 with clear-cut statements from the co-conspirators about the Iranian regime’s involvement, he went to see Mr. Berger and was instructed not to disseminate the information.

“He asked, ‘Who knows about this?’ And I said, ‘Excuse me?’ ‘So, who knows about it?’ he says. ‘Well,’ I said, ‘the attorney general of the United States, me, you, about 50 FBI agents and the Saudi government,’” Mr. Freeh recalled.

“‘Well,’ he said, ‘it’s just hearsay.’ And I said, ‘Well, with all due respect, it’s not hearsay. It would be a statement by a co-conspirator in furtherance of a conspiracy and would come into court under the rules of evidence,’” he added.

Mr. Freeh said he first began encountering resistance to making a case against Iran’s regime when he first wanted to send the agents to Saudi Arabia a year earlier.

“What we were told by the Saudis was the only way that we can do this is if your president asks the king or the crown prince for this access,” he said. “And if so, we can probably deliver it at that level. But we can’t do it at your level.

“I’d go back to the White House and say we are told the talking points, the requests, weren’t raised. And we would get a variety of different answers,” he continued. “But the bottom line was we couldn’t get the president to raise this. So what I did was I contacted former President George H.W. Bush. He had a very good relationship with the Saudis. I explained to him what my dilemma was and asked if he would contact the Saudis. And he did.”

Mr. Freeh said he witnessed another example of the Clinton administration showing deference to Iran’s regime that he feared risked national security.

“They were encouraging me not to do surveillances on the cultural teams and athletic teams that were starting to come in from Iran,” he said. “And I refused as director, saying we had good evidence that the Iranians had put their agents on these wrestling teams and they were coming into the U.S. to contact sources.”

Mr. White said his intelligence analysts didn’t want Iran’s regime to have been behind the Khobar Towers attack because it would have serious long-term ramifications for America. But once the evidence established a link, it was wrong for the information to be cut off for political reasons, he said.

“It polluted the entire intelligence process, which is not supposed to be interfered with in any way with political priorities,” he said. “You cannot provide your intelligence community selective intelligence without corrupting the process, and that was an outrage.”