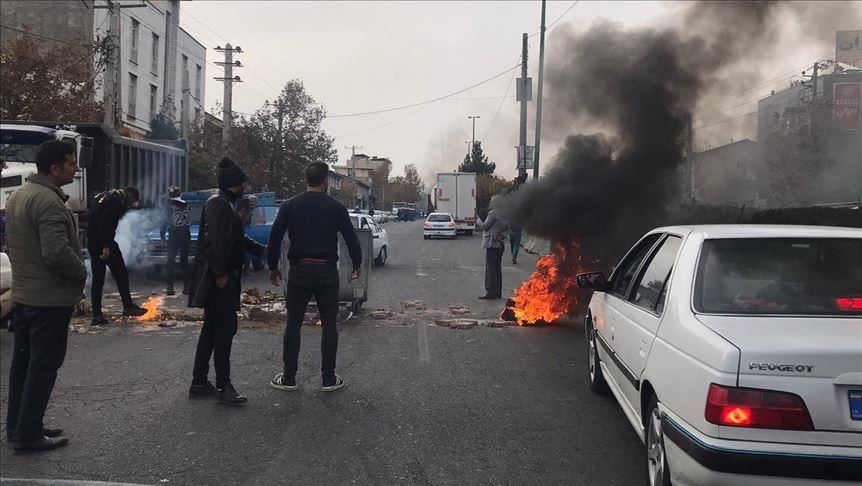 Almost three years after Iran’s historic November 2019 uprising, protests are still taking place all across the country, involving people from all walks of life. Increasingly, the regime’s own institutions and state media are publicly recognizing Iranian society’s explosive state.

SNDU operates as part of the General Staff of Armed Forces and is dedicated to doctoral-level work on military doctrine, applied defense sciences, and management. All persons participating in that work are required to be at least 50 years old and to “pledge and prove their loyalty to the Supreme Leader.” These requirements limit applications to military officials who have been actively engaged in systematic crimes for the past four decades.

The newly published study examined the nationwide uprisings of January 2018 and November 2019 as well as subsequent protests, some of which are still ongoing and may set the stage for still further uprisings. The study concluded: “With the continuation of the economic crisis and the sharp increase in the feeling of injustice and inequality in society if uprisings are formed again, nearly 75% of people will participate in the protests.”

This research claimed to have been conducted in Tehran, indicates that nearly 67.2% of Iranians have experienced a “relative state of deprivation” at “high levels.” It also found that 82.2% of Iranians polled “insist they have not yet met their needs,” while “59.4% of people consider the country’s situation anomalous and abnormal.”

The so-called civil disobedience in question involves writing letters, going on strikes, and holding protests. Non-civil protests include the growing trend of defiant youths attacking the regime’s bases. These measures continue in spite of the government accelerating its rate of executions under Ebrahim Raisi, in a bid to terrorize the public.

Although engineered, the statistics cited in the SNDU study indicate that Iranian society is on the verge of a revolution. While the number of arbitrary arrests and executions is rising in Iran, there is no need to peer into the gloom to understand that expressing anti-regime thoughts are criminalized under Iran’s ruling theocracy.

The study also emphasizes that economic inequalities play the most crucial role in increasing the “feeling of relative deprivation” along with “social blockage.” The authors added that “the feeling of deprivation can also manifest itself in the form of civil and social dissatisfaction.”

What was the takeaway of the Iran uprising in Nov 2019, in 200 cities, despite 1,500 murdered by the regime as people called for #FreeIran and the world saying #WeStand4FreeIran

This study was presented as a warning to regime officials, encouraging them to start “reforming political governance” and “social justice” to reduce dissatisfaction and prevent the spread of protests. The report also urges regime officials to respect the rights of ethnic and religious minorities and equally distribute wealth among all Iranians.

The report also suggests that officials should avoid and combat “nepotism”  and should be “handing over jobs based on acquired skills, experience and expertise.”

While this research lays bare the regime’s vulnerability and the explosive state of Iran’s society, another study conducted by the same institution questions the so-called “stability” that regime officials continue boasting about.

The study titled “Iran after [the Persian Year] 1400” emphasizes that the two widespread protests in January 2018 and November 2019, along with the sanctions, the regime’s mismanagement of economic impulses, and its policies over the last three decades “promise a deep social change in the near future.”

Referring to developments in the social, political, and economic spheres of Iranian society since 2011, the study highlights the intensification of “apparently scattered but unidirectional [protest] waves” that can affect the future of Iranian society.

The study specifically focused on the expansion of trade union protests in Iran, the increasing influence of social networks among people, the unprecedented impact of the stock exchange collapse, and the fluctuating dollar value on Iranians’ economic and social life.

Referring to the emergence of “innovative spheres of activism” in Iran, the study acknowledged, “In the course of social and political developments of the last decade, all kinds of activism have been created and have become new centers for social and cultural communication and exchange of Iranians and the creation of a political power.”

“All these factors have completely changed aspects of Iranian society, and along with the two protest waves of January 2018 and November 2019, the suspicion that Iranian society is on the threshold of political collapse has been strengthened.”

This research concludes by warning regime officials that they can never ignore the “danger of mass, unorganized, unpredictable, violent and leaderless rebellion” in Iranian society.

Previous article
Iran News in Brief – September 6, 2022
Next article
An Overview of Iran’s History of Hostage-Taking and how Western Appeasement has Fueled Tehran’s Terrorism