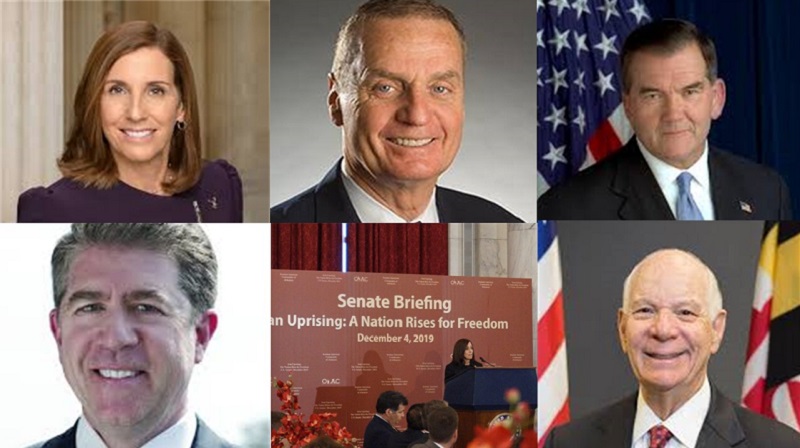 The United States Senate hosted an event last week in support of the Iran protests for regime change.

Mrs. Rajavi added: “The mullahs’ regime has no support among the people and lacks legitimacy….the regime has no solutions to offer for political and economic crises… The MEK’s efforts to build an organized movement succeeded. The resistance units of the MEK played a key role in the uprising… The answer to the problem of Iran is to overthrow the religious dictatorship, which is the desire of the Iranian people.”

She concluded: “The solution for the crises in the Middle East, from Iraq to Yemen, and from Syria to Lebanon, is the overthrow of this regime.”

“Governments and the international community must set aside any consideration or accommodation vis-à-vis Iran’s ruling theocracy and demand an immediate stop to the killings and arrests. And if the mullahs remain defiant, the UN must decisively put in place Security Council sanctions…European Union and the United States, to recognize the struggle and the resistance of the Iranian people to overthrow the clerical regime and support their right to resist against suppression and repression. The people of Iran expect Congress to lead the way in recognizing this noble right,” Mrs. Rajavi said.

As for the alternative to the regime, General Jones said: “The NCRI is a coalition that has democratically elected a leader. They have Jeffersonian democratic principles. It is something that we should celebrate… and I look forward to being with you in Tehran one of these days.”

Governor Ridge added how the NCRI for Iranians “is a national appeal for justice and freedom and independence…it’s about time that the United States of America leads that effort among democracies to not only condemn this regime but to publicly support the democratic uprising, proudly led, proudly led by the MEK.”

Ambassador Bloomfield spoke on Iran’s history for democracy and freedom adding: “The National Council of Resistance of Iran, the Mujahedin-e-Khalq, living in Albania and the OIAC supporters here and all across the United States are all the intellectual heirs of Iran’s great nationalist hero Mossadegh and the freedom movement…people who stand for an Iran governed with democracy, freedom, self-determination, universal principles, and unalienable rights.”

Ambassador @LBJunior ar @OrgIAC Senate Briefing on Iran: And are you ready to identify people among the opposition groups of Iran who have a plan to move toward legitimate government, based on consent of the government?” @StateDept https://t.co/8IEA4QyYtK @VOAIran @USAdarFarsi

Mr. Tim Ghaemi delivered a message on behalf of OIAC calling on the United States, to “take tangible steps to the side with the protesters. One example is to prevent the Iranian regime from cutting off the Internet.”

While recognizing the strong bipartisan support for the protesters by US congressional leaders, he urged Congress to “introduce a language in no uncertain terms to hold the regime accountable for its crimes, side with the protesters who seek nothing but freedom, and to recognize the right of the Iranian people to unseat their repressive rulers.”

Background on the Iran protests:

Iran is witnessing its greatest political upheaval since the 1979 revolution. Protests for regime change, with chants of ‘Death to the dictator”, have erupted in at least 180 cities.

Protesters have managed to take over or destroy hundreds of government centers, security outposts, and state-affiliated banks, gas stations, and seminaries.

The regime has resorted to brute repression, killing at least 1000 protesters and arresting thousands more. It also shut down Iran’s internet completely for a week, blocking images of the protests from reaching the outside world.

Previous articleIran Protests: Student Day – We Will Turn Every University Into a Bastion of Uprising and Revolt
Next articleDay 25 of the Iran Protests for Regime Change