Written by Mahmoud Hakamian on 13 January 2020.

In a book called Iran’s Resurgent Resistance, Professor Ivan Sascha Sheehan, a counterterrorism scholar and leading authority on U.S. policy toward Iran, writes about a journey made by a bipartisan delegation of senior U.S. officials deep into the community of the Iranian Resistance.

Written by Mahmoud Hakamian on 12 January 2020.

Anglo Iranians, supporters of the People’s Mojahedin Organization of Iran (PMOI, Mujahedin-e Khalq or MEK) and the National Council of Resistance of Iran (NCRI), held a protest rally in front of the United Kingdom Prime Minister's office in London, commemorating victims of the Ukrainian passenger jet, downed by the Iranian regime on Wednesday.

Simultaneous With EU Council’s Session, NCRI and MEK Supporters Rally in Belgium for a Free Iran

Iranians, supporters of the PMOI-MEK and the NCRI, on Friday held a protest rally in Brussels, Belgium, near the EU headquarters

Iranians, supporters of the People’s Mojahedin Organization of Iran (PMOI, Mujahedin-e Khalq or MEK) and the National Council of Resistance of Iran (NCRI), on Friday held a protest rally in Brussels, Belgium, near the European Union’s headquarters.

In slandering the MEK, third-rate TV host Chris Hayes is punching above his intellectual weight

Chris Hayes of MSNBC, becomes the mouth piece for Iran's dictatorship to bash the MEK, the main opposition group to the dictatorship ruling Iran

Recently, a third-rate TV opinion host proved yet again that "We are all born ignorant, but one must work hard to remain stupid." Chris Hayes went "All In" to join the herd of Iranian regime propagandists against the main democratic opposition, the Mujahedin-e Khalq (MEK). He is toeing the line of a totalitarian regime that is fresh off their November killing spree when at least 1,500 innocent demonstrators, including many children, were viciously murdered and 4,000 more wounded by security forces.

During the 24th telethon, Iranians from across the globe expressed their full support for the Iranian people’s November uprising and the opposition group People's Mojahedin Organization of Iran (PMOI/MEK). They also expressed solidarity with the nationwide Iran protests and the MEK's Resistance Units in Iran.

Last weekend, Iranians both inside Iran and abroad took over the airwaves, as a prominent Iranian opposition satellite television channel that has played a vital role in broadcasting images of the recent Iran protests and the Iranian regime's deadly crackdown held its 24th bi-annual telethon. 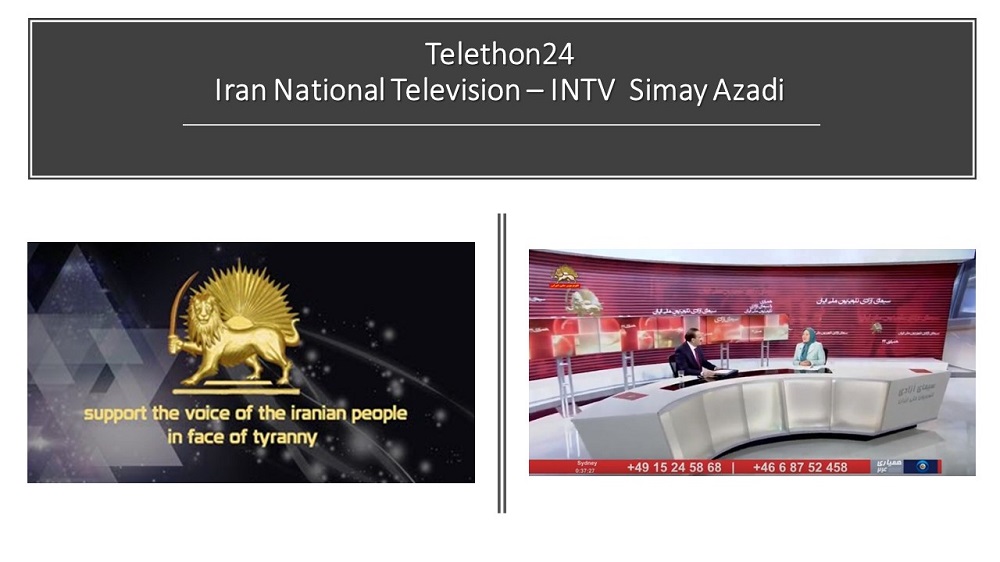 Simaye Azadi's (INTV) telethon began Friday afternoon and was immediately flooded with calls from Iran and cross over the world, with many callers paying tribute to the channel’s unmatched continuous coverage of the Iran protests.

Written by Mansoureh Galestan on 14 December 2019.

A prominent Iranian opposition satellite television channel that has played a key role in broadcasting images of the recent Iran protests and the lethal crackdown by Iran's regime is holding its 24th bi-annual telethon. Simaye Azadi (INTV), a 24-hour Free to Air, Satellite television station which broadcasts from Europe, has a huge following inside Iran and among the diaspora.

Iranian regime’s foreign minister, Javad Zarif cancels his trip to Italy in fear of the repercussions over the massacre of Iran protesters

Press Conference in the Italian Parliament

A pre-planned trip by the foreign minister of the religious dictatorial regime in Iran, Mohammad Javad Zarif, to Rome was abruptly canceled following outcries from supporters of the Iranian Resistance and members of both chambers of the Italian Parliament.