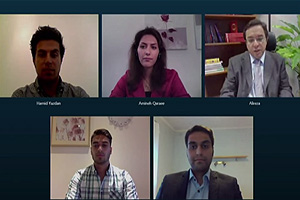 They talked about how the young people of Iran are now at the forefront of the opposition – inside and outside Iran. They are participating in rallies and demonstrations despite the personal risk that this brings them. They are prepared to suffer the brutality of the regime in support of the opposition.

The Simaye Azadi telethon has also demonstrated that young people have a huge amount of support for this television channel and freedom of speech in general. The four young Iranians pointed out that the telethon showed the huge level of support that exists for the Iranian Resistance among the Iranian people, in particular among Iranian youths.

Ehsan Gharaei spoke of his admiration for the relentless youth who are inspiring more and more people to voice their opinions. He said that Simaye Azadi gives people in Iran hope about how unpopular the regime is and it is also a reflection of the Iranian community that wants change. Simaye Azadi lets the Iranian people see the truth, he said.

Amineh Gharaei said that “Iran is like a prison for all of us - Simaye Azadi gives us hope”. The television channel is a way for Iranian society to see that they are not alone – they can see people fighting the regime, and they are reassured that there is a ray of light in these dark times, she said.

Each panellist was asked for some final words. Bahador Marandi’s final message was to the youth in Iran. He said “we will always try to overthrow this regime. As Mrs. [Maryam] Rajavi says, they will be overthrown; it is just a question of time”. With the support of those inside and outside of Iran, he said, “we will do it”.

Amineh Gharaei told the Iranian youth to never give up. She gave reassurance that there are many young Iranians working abroad and with the organized Resistance, in particular with the People’s Mojahedin Organization of Iran, PMOI (Mujahedin e Khalq, MEK), for their freedom. She said: “Even though we are far, we are beside you. We feel your pain. Be strong.”

Ehsan Gharaei said that he knows the Iranian people are suffering under the regime. He knows the regime are violating their rights and human rights. He said: “Don’t forget, as a human and as an Iranian you have rights – fight for your rights.” In order for Iran to be a free, democratic country, he said it was important to never give up. “We have to keep fighting and never forget that one day we will achieve our goal by continuing our fight.”

Lastly, Yazdan-Panahi quoted Ghandi: “Be the change that you want to see in the world.” He said that we all have a responsibility to make that change. His final words were: “Change is going to come soon. Be ready!”

Simay-e Azadi held its nineteenth fundraising program lasting 46 hours from July 24 to 28. Thousands of Iranians, from all walks of life, and from across Iran and other countries took part in the telethon.