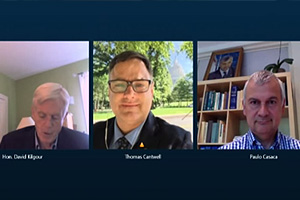 NCRI – Three guest speakers on Wednesday (July 29) participated in an online panel on the subject of the four-day telethon that was held at the end of last week by the Iranian opposition satellite television channel Simaye Azadi.

The online panel opened with some clips from the telethon. Many Iranians called in from Iran and all over the world to make donations. Some Iranians in Iran, fearing reprisals, were able to contribute via friends, family or colleagues from other parts of the world.

The donators were from all walks of life including workers, teachers, bazaar merchants, industry owners, artists, intellectuals, aged mothers and fathers and young students.

Many callers apologized for not having the means to contribute more, and many were making sacrifices such as foregoing medication in order to be able to contribute all they could.

One viewer said: “This channel has never allowed for our voice to be silenced”. Another viewer said that Iranians can live without bread and water, but they can’t live without this channel which gives them hope for a bright future.

During Wednesday’s online conference, Mr. Casaca said he was proud and pleased to be supporting the voice of the Iranian people, a voice that he says “refuses to be silenced”. He highlighted the importance of freedom of expression – a right that the Iranian people are being denied.

Col. Cantwell spoke of his first visit to Camp Ashraf which reminds him of the current situation with Simaye Azadi. He said that in 2003 he went to the radio station that had been constructed in Camp Ashraf and the residents were listening to speeches by world leaders on the subject of freedom in Iran. Col. Cantwell experienced the regime trying to jam that broadcast.

He also said that what is happening in Iran is fundamentally “a battle between good and evil”. Suppressing the truth and freedom of expression is an “evil act” that goes on in Iran. He criticized the “moral bankruptcy” of all those involved and party to the suffering of the PMOI (MEK) members now in Camp Liberty, Baghdad.

On this subject, Mr. Kilgour said that the US administration has done very little to keep their commitment to protecting those at Camp Liberty. He said that US President Barack Obama has to take his responsibilities to the PMOI (MEK) members seriously.

Col. Cantwell said that the free flow of information and ideas in a country is vital to society. The presence or lack of these are indicators to the nature of a government, and depriving the Iranian people of freedom of expression says it all.

Col. Cantwell applauded the Iranian people for showing so much strength. He said they hold the key to their future and declared his support to them. Mr. Casaca said that this strength is what the Iranian regime fear the most – they have less fear for the possibility of a US strike or conflict with other countries.

Mr. Kilgour said that no matter who you are or what country you are from, the Iranian regime is “barbaric”. Col. Cantwell also supported this statement, saying that the regime is killing its own people because they are afraid of their “ideas.” Mr. Casaca stated that the Tehran regime is the main sponsor of terrorism and that “we owe a lot to the Iranian Resistance” for fighting for the rights of Iranian people.

All three speakers welcomed the existence of an Iranian opposition satellite channel that informs the Iranian public of real news and information which the mullahs try to censor.