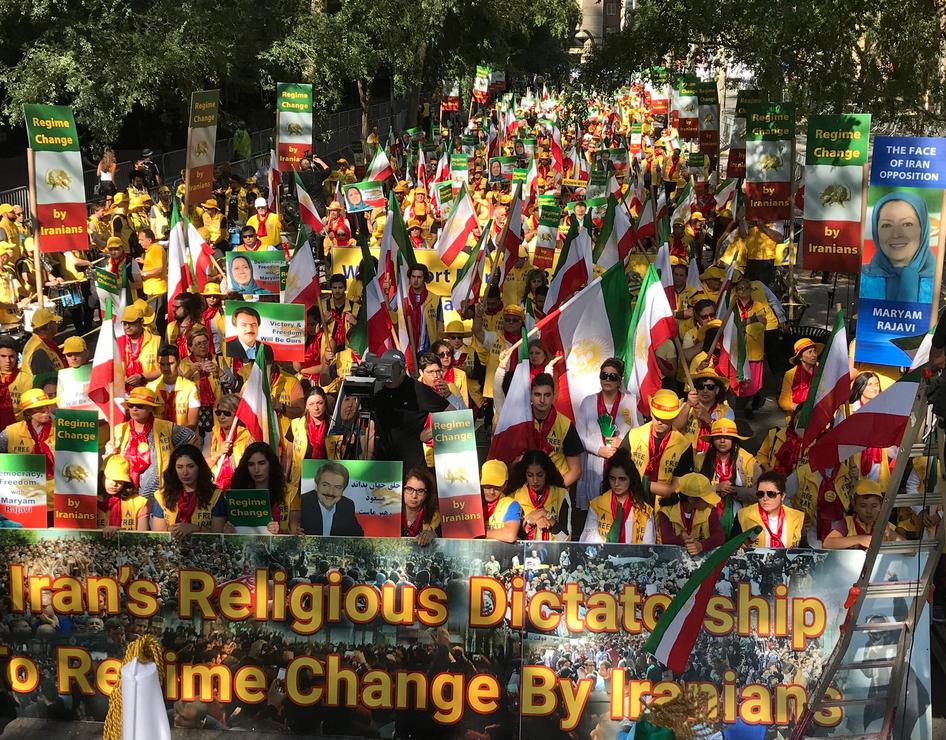 For the second day in a row, very large demonstration of MEK supporters in New York, simultaneous to Hassan Rouhani's speech at the UNGA- Demonstrators chant "No to Rouhani", and "Regime Change in Iran"-September 25, 2019

Written by Shamsi Saadati on 26 September 2019.

Iranian American supporters of the main Iranian opposition group People's Mojahedin Organization of Iran (PMOI, Mujahedin-e Khalq or MEK) rallied on Wednesday, September 25, for the second day in New York outside the United Nations chanting “No to Rouhani” and voicing their utter opposition to the mullahs’ regime ruling Iran.

The demonstrators demanded the UN expel the Iranian regime’s President Hassan Rouhani and the mullahs’ delegation. The protestors described Rouhani as the representative of a warmongering regime that carries out the world’s highest number of executions per capita. Iran’s regime considers its survival conditional upon continued support for terrorism, human rights violations, attacking oil facilities, piracy, and nuclear blackmail, they stated. The delegation of such a state should be expelled from the UN immediately.

"If one can topple this regime without an organization and leadership, without overcoming thorny trials, and without paying the price and making sacrifices, we say: Please, go ahead, don’t delay." @Maryam_Rajavi #UNGA#No2Rouhani pic.twitter.com/jMrjP8qPFI 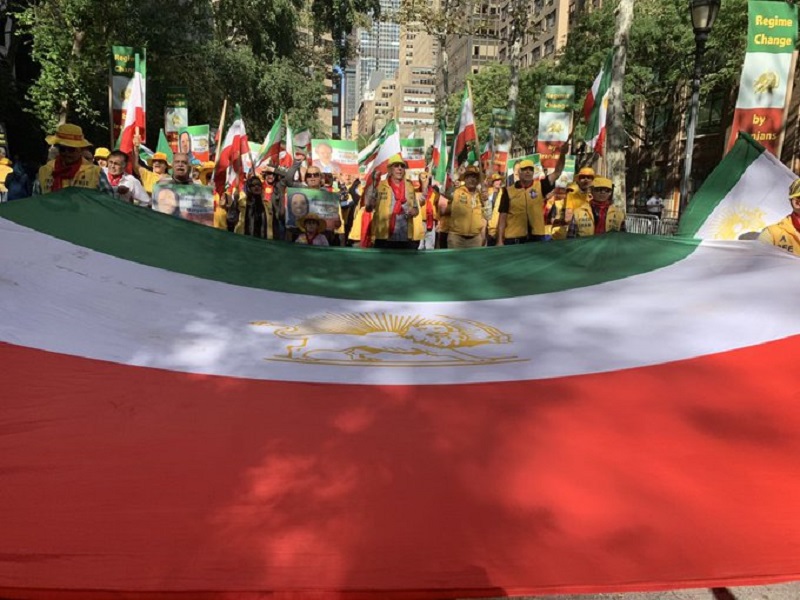 The Iranian Americans rallying on Wednesday announced their full support and solidarity with popular protests for regime change in Iran and with the MEK’s Resistance Units in Iran who are striving to overthrow the mullahs’ regime and establish democracy and freedom in Iran.

On Tuesday, September 24, thousands of Iranian Americans rallied outside the UN in New York to denounce the presence of the Iranian regime’s President at the UN General Assembly and to echo the voice of the millions in Iran who seek regime change.

Hail to my fellow compatriots. With your glorious rally, you showed to the world that the envoy of religious fascism in #Iran has no place at the UN. You proved that the people of Iran will not relent until they achieve freedom. And undoubtedly, they will achieve just that. pic.twitter.com/QRfWV1ZEAB

Iranian opposition leader Maryam Rajavi said in a message to the rally: "Your gathering in New York is a resounding 'No!' to the policy of appeasement, to the policy of buying chances for a moribund regime, and to the policy of inaction toward a regime that preserves its power through warmongering, terrorism, and suppression."

"Your gathering says 'No' to the continuation of the rule of a bunch of occupiers and criminals in Iran. And, it says 'Yes' to the overthrow of this regime by the people of Iran and the Iranian Resistance," added Maryam Rajavi, President-elect of the National Council of Resistance of Iran (NCRI).

Mrs. Rajavi further stated: "Following the clerical regime’s recent attack from inside Iran against Saudi oil facilities, the real question facing the world is no longer who conducted the attack, but they need to advance a policy of decisiveness and firmness against this regime."

The policy of appeasement toward Iran's regime has fostered catastrophes, and there is only one way to undo the damage and that is to stand on the side of the people of Iran who have risen up to uproot the central banker of terrorism, she said.

"The regime in Iran is neither capable of reform nor can it change its behavior; it will never abandon weapons of mass destruction, human rights abuses, and promotion of fundamentalism and terrorism; it gets emboldened by appeasement and it only understands firmness and strength," Mrs. Rajavi added.

"The mullahs’ regime is weak and at an impasse. Its adventurism and evil acts in the region are expanded only because no other party has stood up to it. At the same time, the people of Iran are the regime’s primary victims."