50th anniversary of Iran’s PMOI celebrated in the UK

NCRI – The Anglo-Iranian community in the UK, supporters of Iran’s main opposition group, the People’s Mojahedin Organization of Iran (PMOI or MEK), exile Iranians and proponents of a free and democratic Iran, celebrated the 50th anniversary of the PMOI at an event in London on Saturday, August 29.

Participants commemorated the memory of hundreds of thousands innocent victims of the Iranian regime during the last 36 years, who have been tortured, imprisoned and executed only because they rejected the absolute rule of the Clergy and steadfastly defended the democratic aspirations of the Iranian people. They also expressed support for the Iranian Resistance, the 10-point plan for a future Iran presented by Mrs. Maryam Rajavi, President-elect of the National Council of Resistance of Iran (NCRI), while promising to continue their endeavors to bring about democratic change in their homeland, Iran. 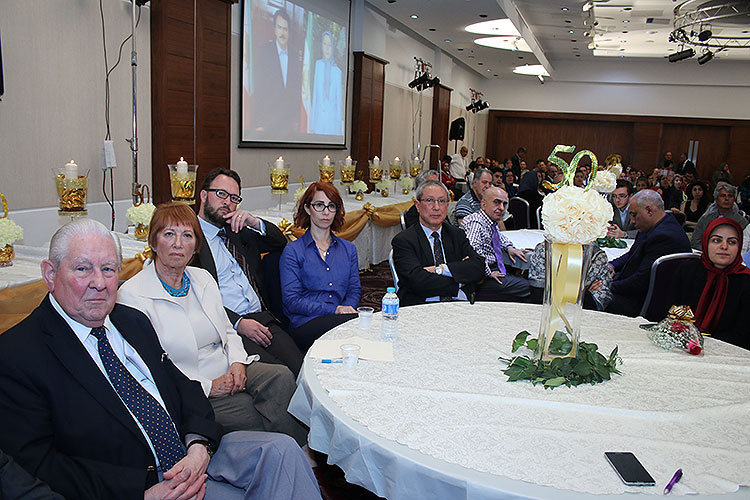 In its press release, the British Parliamentary Committee for Iran Freedom (BPCIF) with major support in both Houses of Parliament said “[We join] Iranians, both in exile and inside the country, to salute members of the PMOI in Camp Liberty and the Iranian Resistance movement for their sacrifices and principled struggle to bring freedom and democracy to Iran.”

The British lawmakers added, “[Their] democratic stance made the PMOI and its members, the main target of [Tehran’s] political violence and defamation propaganda. The Iranian regime has executed 120,000, including 30,000 political prisoners massacred during the summer of 1988, a majority of whom were members, or activists of the PMOI, in an effort to annihilate the organised political opposition to the theocratic rule.”

“However, due to its grassroots support among the Iranians at home and in exile it has kept striving for establishment of democracy in Iran. The PMOI has been the driving force in the National Council of Resistance of Iran, the coalition of Iranian groups and personalities dedicated to democratic change in Iran, headed by Maryam Rajavi.”

Several cross-party members of both Houses of Parliament sent messages of solidarity to Saturday’s gathering while women’s rights activists, a former senior UN official, a member of the UK House of Lords and youths from the Anglo-Iranian community addressed the event, supporting the cause of freedom and human rights in Iran.

In his remarks, Lord Clarke of Hampstead, Former Chairman of the UK’s Labour Party and a long-time member of the BPCIF, praised the 50 years of unrelenting campaigning for basic human rights and justice for the oppressed people of Iran and said “according to Amnesty International if current execution rates continue nearly a thousand people will be executed during this year. That is hardly the act of a regime that enjoys the support of its people as claimed by the senior Iranian regime officials and leaders. Well what the world has seen since 1979 is a theocratic regime afraid of its own people.”

He added, “We dream of a nuclear free Iran and I promise you I will stand with you and the PMOI, as you continue to endeavor to bring about a democratic change in Iran … I will continue to call on our government to adopt the firm policy of publicly supporting the democratic Iranian opposition; the 10-point plan of Mrs. Maryam Rajavi – a plan which is based on decency, equality for women, the right to talk, the right to associate.”

With regard to the humanitarian crisis facing thousands of PMOI (MEK) members in Camp Liberty, created at the behest of the mullahs in Iran, Lord Clarke said, “In recent years we’ve witnessed the tragedy of [Camp] Ashraf and the continuing ill-treatment of residents of Camp Liberty. If ever there was a place so misnamed it’s Camp Liberty; it’s a complete opposite to what the word liberty means. It’s a place which I’ve always described since the people were moved there from Ashraf as a concentration camp and I still believe that to be true … One step in this direction [publicly supporting the democratic Iranian opposition] is for our government to take immediate measure in the UN and EU to secure the safety of PMOI members in Camp Liberty.”

Lady Val Corbett, a women’s rights activist and the wife of the late Lord Corbett of Castle Vale, the founder of the BPCIF, said “He [Lord Corbett] always remembered the residents in Camp Ashraf, calling them the bravest of the brave and now that Ashraf is no more, alas, I know he would say the same courage exists in the residents of Camp Liberty.”

Echoing Lord Clarke’s remarks with regard to Camp Liberty, she said, “I join him [Lord Clarke] to ask why the 4th Geneva Convention has not been recognized and protected those residents. Especially acting to ensure the inhumane medical siege imposed at the behest of the Iranians, by the way, that should be lifted and immediately.”

“Since 1979, this murderous regime has been at war with its own people. Tens of thousands have been killed and the prisons are full of so-called political prisoners, many on the flimsiest of evidence. About 2000 people have been executed since the ‘libertarian’ president came to power two years ago”, she said in regard to the alarming rise of the executions in Iran under Hassan Rouhani.

Lady Corbett added, “That’s hardly a regime that enjoys the support of the people. But the West is turning a blind eye … so the PMOI has never been more needed than it is today. Your activities expose the mullahs’ repressive tactics to the international community to those millions in Iran who cry freedom and yearn for a better future and a nuclear free Iran. Today I call, as I’ve always called in the past, for our government to support the 10-point plan of Madam Rajavi.”

Speaking with first-hand experience on dealing with the residents of Camp Liberty and Camp Ashraf as the former Chief of the Human Rights Office of the UN Assistance Mission for Iraq (UNAMI), Dr Tahar Boumedra, said, “I’m here today to celebrate the 50th anniversary of the main Iranian resistance movement, the PMOI. These are courageous people, and I had the chance to meet them on the ground, in Iraq … They were committed to high standards of human values and they were fighting and prepared to give the ultimate for their beliefs.”

“I would also like to remind the UN that they made a promise and that they should fulfill it; this promise was that once the Ashrafis moved to Liberty they will be treated as refugees. Tonight I call up on the High Commissioner for Human Rights to fulfill his promises and to declare Camp Liberty as a refugee camp … I call on the UN High Commissioner for Human Rights to deliver the cards [refugee ID cards] without any delay because this will save lives and will save a lot of misery to the Ashrafis,” Dr Boumedra proposed as the most viable solution to prevent another humanitarian catastrophe in Iraq.

In her remarks, Rana Rahmanfard, in her teens, whose uncle was executed by the Iranian regime at the age of 19, highlighted the deteriorating situation of youths in Iran and said, “Everyday there is news about the youth being arrested, having to give up their education to be able to work and provide for their family and sleeping on the streets in cardboard boxes … With thousands of similarly painful stories, I think to myself, what will become of the future for Iran? There should be hope and place for a free and peaceful Iran that could be found. I have found that Iran in the eyes of Mrs. Maryam Rajavi and her freedom lovers … and I have that hope in the PMOI, who has dedicated 50 years of fighting, sacrifice and loyalty to the people of Iran … So now on the 50th anniversary I pledge alongside all the Iranian youth in Iran [to continue to struggle for a free and democratic Iran].”

Naghmeh Rajabi, another young member of the Anglo-Iranian community said, “Like thousands of families, many of which are present here today, me and my family have experienced the brutality of the Iranian regime, losing members of our family and friends, two of which were my dear aunts. Miss Afsaneh Rajabi, executed at the young age of only 22, and Ms Zahra Rajabi, who [was] one of the leading women in the Iranian Resistance whose life was stolen when she was assassinated in Turkey by the Iranian agents. Their crime? Fighting for freedom, democracy, equality and justice.”

“I would like to express my heartfelt gratitude to all of my sisters and brothers at PMOI, as I believe today is a celebration of your hard work and I am proud to call myself a small member of this resistance movement. I ask God to give us the strength to continue our support in every way possible so that we can reach our common goal and free our beautiful homeland, Iran, from the hands of the ruling dictators as soon as possible”, she concluded.

Farzaneh Hosseini, lawyer and a young human rights activist, said, “I am well aware that women and men my own age in Iran do not have a voice, and the PMOI has taught me that I must be their voice, I must do all I can to end the oppression they face – and I and my friends among the Iranian youth in this country will continue to be their voice, and will continue to fight, until we replace the murderous theocracy in Iran with a government that listens to and represents our youth and our people.”

“I am proud to be able to stand before you on the 50th anniversary of the founding of this organization. An organization which not just the mullahs, but also the Shah, so stupidly thought that they could erase. We Iranian youth of today are living proof that you cannot erase or defeat the PMOI by any means, because they are just and their fight is just. Indeed, sadly for the mullahs, in the face of any pressures faced, our children of tomorrow will be living proof of this too”, she added, refuting the theocratic regime currently ruling Iran.