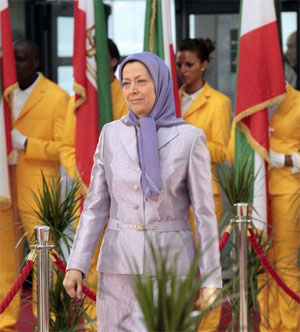 VILLEPINTE – “Iran, Ashraf, Azadi (freedom)”, cheered tens of thousands of supporters of the People’s Mojahedin (PMOI) on Saturday near Paris. They were celebrating 30 years of resistance “against the Iranian regime and called for international protection of Camp Ashraf in Iraq.

“The resistance will not die,” their leader Maryam Rajavi told a cheering crowd with many people like the former mayor of New York, Rudy Giuliani, also in attendance.

Tens of thousands from all over Europe, the United States and Canada participated, according to organizers. Dressed in yellow in a huge exhibition hall in Villepinte, north of Paris, they cheered Mrs. Rajavi while waving yellow flags and balloons with her image.

The meeting, held annually since 2004, had special significance for the PMOI this year after the early April attack by the Iraqi army against Camp Ashraf, north of Baghdad, which led to 36 dead and over 300 injured, according to the latest report from the organization.

“We are here to defend the rights of people of Ashraf,” Fereshteh, 48, told AFP. Exiled for the past 25 years in Canada, she attends the event every year “even if the plane tickets cost her and her four children over $7,000”.

In her speech, Mrs. Rajavi called for UN observers to be installed in Ashraf.

“We urge the United States and the European Union only to protect the observers. This is the minimum demand to protect the life of the PMOI in Ashraf”, said the president of the National Council of Resistance of Iran (which has the PMOI as its main component), the main opposition movement outside the Tehran regime.

Banned in 1981 by the Islamist regime in power in Tehran, the PMOI moved to Iraq several years later during the Iran-Iraq war.

Some 3,400 people now live in Camp Ashraf, which was disarmed after the invasion of Iraq by the United States and its allies in 2003. At the time, the Americans ensured the safety of the camp before transferring it to Iraqi forces in 2009, whose leaders maintain very good relations with Tehran.

“The United States bears a responsibility for transferring protection of Ashraf. For The intentions of the Iraqi government to suppress the residents of Ashraf was known in advance”, said Mrs. Rajavi.

Rudy Giuliani has called for PMOI to be removed “immediately” from the black list of terrorist organizations in the United States, as has been done by the EU in 2009. The United States should take a decision on it in less than six months, said a U.S. official in early May.

They were especially pleased with the ruling of the French judiciary eight years after a large police operation that led to the arrest of 164 members, including Mrs. Rajavi, in Auvers-sur-Oise (north of Paris where PMOI headquarters are) in June 2003 “on charges of association with a terrorist enterprise”.

“This case of conspiracy has finally collapsed,” Mrs. Rajavi said.

Previous articleLargest gathering of Iranian exiles abroad with hundreds of politicians and lawmakers from the U.S., Europe and the Middle East in attendance
Next articleExiled Iranian group wants UN to watch Iraq camp