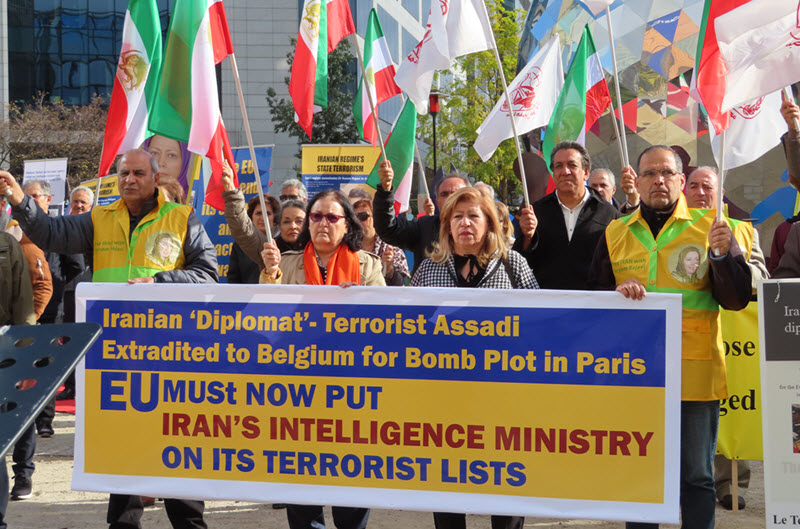 Members and supporters of Iranian opposition group, the National Council of Resistance of Iran (NCRI) held a demonstration in front of the European Commission in Brussels on Monday to call for Iran’s Ministry of Intelligence to added to the European Union’s terror black list; four months after an Iranian plot to blow up an opposition rally in Paris was foiled by European authorities.

In early October, French officials said that they had “no doubt” that Iran’s Ministry of Intelligence was behind the plot to attack the rally, especially after Iranian diplomat Assadollah Assadi was arrested for planning the terrorist attack.

Paulo Casaca, a former member of the European Parliament, said: “I was among the people who were there on June 30. So I can say that, even personally, I have a case here to the European External Action Service (EEAS) and there has not been a single word from the EEAS on the issue.”

Members and supporters of Iranian opposition group, the NCRI held a demonstration in front of the European Commission in on Monday to call for Iran’s Ministry of Intelligence to added to the European Union’s terror black list; four months afte…: The NCRI also held a protest in Downing Street on Saturday to draw attention to the human rights abuses of the Iranian Regime and hopefully encourage Prime Minister Theresa May to put more pressure on the Regime…https://t.co/HMsWiPUEfz pic.twitter.com/BPByUt0TKt

Dr Jocelyn Scotts condemned Iran’s use of the death penalty and torture and noted that the Iranian people are protesting against this brutality.

While NCRI supporter Naghmeh Rajabi said: “There needs to be more pressure to bring a halt to all of these executions, especially the public hangings that are happening.

Children, people, normal people are walking in the streets and they see bodies hanging from cranes. That’s kind of becoming a normality in Iran and it is completely unacceptable in the twenty-first century.”

She advised that if the UK was going to keep doing business with Iran, then it should take action against its human rights abuses, but that the best solution would be regime change.

Previous articleIran Regime Still Not Complying With International Financial Regulations
Next articleUS: Sanctions Waivers on Iran Oil Only Available to Countries Who Cut Supply by Over 20%