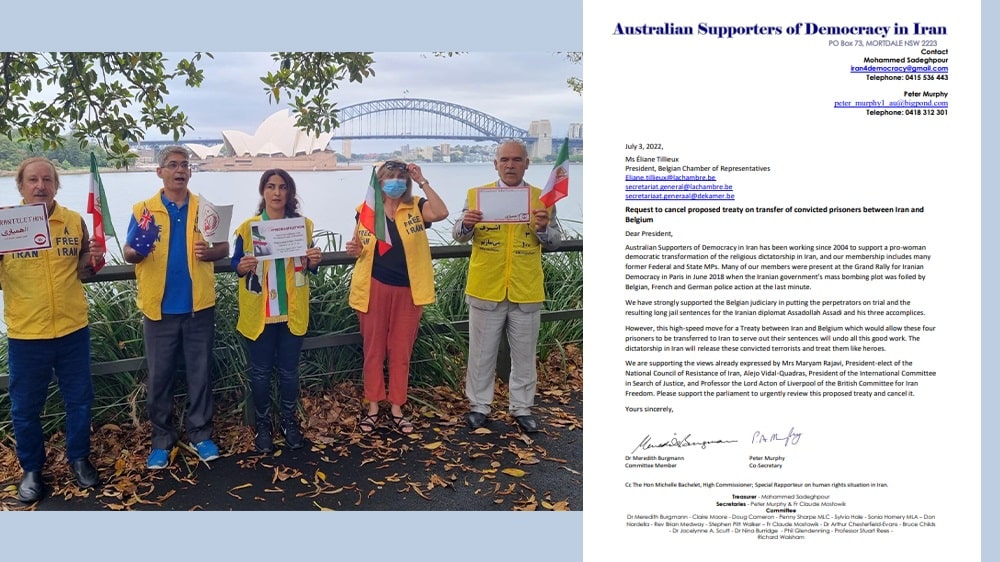 Australian Supporters of Democracy in Iran have been working since 2004 to support a pro-woman democratic transformation of the religious dictatorship in Iran, and our membership includes many former Federal and State MPs. Many of our members were present at the Grand Rally for Iranian Democracy in Paris in June 2018 when the Iranian government’s mass bombing plot was foiled by Belgian, French, and German police action at the last minute.

We have strongly supported the Belgian judiciary in putting the perpetrators on trial and the resulting long jail sentences for the Iranian diplomat Assadollah Assadi and his three accomplices.

However, this high-speed move for a Treaty between Iran and Belgium that would allow these four prisoners to be transferred to Iran to serve out their sentences will undo all this good work. The dictatorship in Iran will release these convicted terrorists and treat them like heroes.

We are supporting the views already expressed by Mrs. Maryam Rajavi, President-elect of the National Council of Resistance of Iran, Alejo Vidal-Quadras, President of the International Committee in Search of Justice, and Professor the Lord Acton of Liverpool of the British Committee for Iran Freedom. Please support the parliament in urgently reviewing this proposed treaty and canceling it. Yours sincerely,