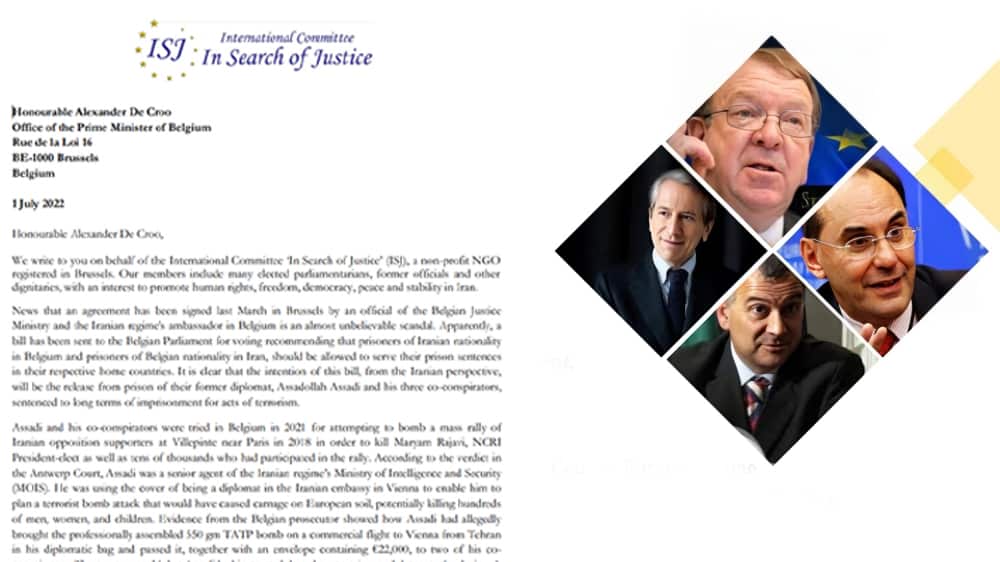 We write to you on behalf of the International Committee ‘In Search of Justice’ (ISJ), a non-profit NGO registered in Brussels. Our members include many elected parliamentarians, former officials and other dignitaries, with an interest to promote human rights, freedom, democracy, peace and stability in Iran.

News that an agreement has been signed last March in Brussels by an official of the Belgian Justice Ministry and the Iranian regime’s ambassador in Belgium is an almost unbelievable scandal. Apparently, a bill has been sent to the Belgian Parliament for voting recommending that prisoners of Iranian nationality in Belgium and prisoners of Belgian nationality in Iran, should be allowed to serve their prison sentences in their respective home countries. It is clear that the intention of this bill, from the Iranian perspective, will be the release from prison of their former diplomat, Assadollah Assadi and his three co-conspirators, sentenced to long terms of imprisonment for acts of terrorism.

Assadi and his co-conspirators were tried in Belgium in 2021 for attempting to bomb a mass rally of Iranian opposition supporters at Villepinte near Paris in 2018 in order to kill Maryam Rajavi, NCRI President-elect as well as tens of thousands who had participated in the rally. According to the verdict in the Antwerp Court, Assadi was a senior agent of the Iranian regime’s Ministry of Intelligence and Security (MOIS). He was using the cover of being a diplomat in the Iranian embassy in Vienna to enable him to plan a terrorist bomb attack that would have caused carnage on European soil, potentially killing hundreds of men, women, and children. Evidence from the Belgian prosecutor showed how Assadi had allegedly brought the professionally assembled 550 gm TATP bomb on a commercial flight to Vienna from Tehran in his diplomatic bag and passed it, together with an envelope containing €22,000, to two of his coconspirators. The court was told that Assadi had instructed them on how to prime and detonate the device. A third co-conspirator was posted at the Villepinte rally as a lookout.

There is no doubt that Assadi’s terrorist plot was ordered from the highest echelons of the regime, including the Supreme Leader Ayatollah Ali Khamenei, the president at that time Hassan Rouhani and the then Foreign Minister Javad Zarif. The EU should have demanded they be held to account. There is also no doubt that if these prisoners are allowed to return to Iran, they will never be asked to serve prison sentences in that country. Indeed, they will be treated as heroes and possibly promoted. Their release from prison in Belgium would make a complete mockery of justice and send the clearest signal to the Iranian regime that they can conduct terrorist attacks in Europe with impunity. Indeed, they may even be encouraged to take further European hostages to hold as bargaining chips for future prisoner exchanges.

This concept is scandalous and must be stopped. Two senior members of the ISJ, as signatories to this letter, Giulio Farzi and Struan Stevenson, were plaintiffs in the trial of Assadi, having attended the rally in Villepinte, targeted by the Iranian terrorists.

We urge you to stop this decision in respect of justice in your country and for the sake of the security of Europe.

PAULO CASACA
Member of the European Parliament (1999-2009) Chair of European Parliament’s delegation for relations with the NATO Parliamentary Assembly. Founder and executive director of the “South Asia Democratic Forum”; founder of the international co-operation association ARCHumankind, ‘Alliance to Renew Cooperation among Humankind’.