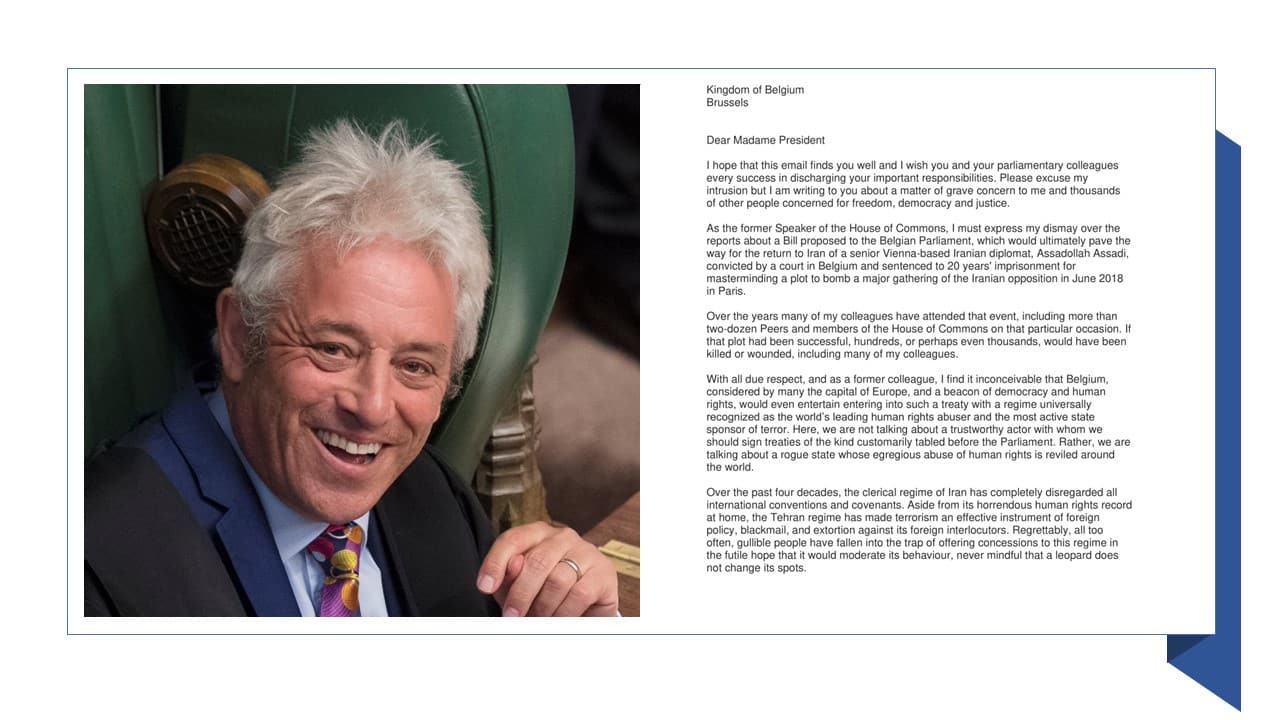 I hope that this email finds you well and I wish you and your parliamentary colleagues every success in discharging your important responsibilities. Please excuse my intrusion but I am writing to you about a matter of grave concern to me and thousands of other people concerned for freedom, democracy and justice.

As the former Speaker of the House of Commons, I must express my dismay over the reports about a Bill proposed to the Belgian Parliament, which would ultimately pave the way for the return to Iran of a senior Vienna-based Iranian diplomat, Assadollah Assadi, convicted by a court in Belgium and sentenced to 20 years’ imprisonment for masterminding a plot to bomb a major gathering of the Iranian opposition in June 2018 in Paris.

With all due respect, and as a former colleague, I find it inconceivable that Belgium, considered by many the capital of Europe, and a beacon of democracy and human rights, would even entertain entering into such a treaty with a regime universally recognized as the world’s leading human rights abuser and the most active state sponsor of terror. Here, we are not talking about a trustworthy actor with whom we should sign treaties of the kind customarily tabled before the Parliament. Rather, we are talking about a rogue state whose egregious abuse of human rights is reviled around the world.

Over the past four decades, the clerical regime of Iran has completely disregarded all international conventions and covenants. Aside from its horrendous human rights record at home, the Tehran regime has made terrorism an effective instrument of foreign policy, blackmail, and extortion against its foreign interlocutors. Regrettably, all too often, gullible people have fallen into the trap of offering concessions to this regime in the futile hope that it would moderate its behaviour, never mindful that a leopard does not change its spots.

This treaty is flawed in its foundations. First, it helps Assadi and his three accomplices, who should rot in a Belgian jail for the heinous conspiracy they hatched, to escape justice and accountability. Second, this ill-advised initiative makes it clear that the ruling theocracy in Iran can get away with terrorist murder. What guarantees are there that the mullahs would not again send their hit-squads to Europe to engage in terrorism and target dissidents, as they have done with impunity in the past four decades? Third, how can one even contemplate the idea that the very state which commissioned Assadi and his co-terrorists to plant the bomb, would keep them incarcerated once they are repatriated? Such a presumption is not only naïve, but an insult to our intellect. There is no question in my mind that they would be given a hero’s welcome. As is clear from court documents, this was an act of state-sponsored terror decided at the most senior echelons of the Iranian regime and not the personal initiative of a few rogue individuals. Fourth, this treaty and its subsequent passage, which I strongly advise you to oppose, set a dangerous precedent elsewhere in Europe, as other nations whose citizens are being held hostage by Tehran may attempt to strike similar deals. You concur, I hope, that such a development would make Europe a roaming ground for terrorist hit-squads sent by Tehran, and threaten not only the security of Europe but also the lives and liberties of Iranian refugees on Europe’s soil.

As such, I emphatically implore you as a colleague, to do everything in your power to oppose this legislation and urge the Government to withdraw it. Given its reputation as the seat of the European Union, NATO and the European Parliament, Belgium should stand with the oppressed people of Iran and not with their oppressors. The passage of this bill, which I hope will be blocked, would leave a dark stain on your government, and send exactly the wrong message to the Iranian people, who are risking their lives in the streets in recent months to overturn this medievalist theocracy.

In all conscience, I ask Belgium’s elected democratic parliamentarians to champion the people of Iran, not its murderous and tyrannical government.