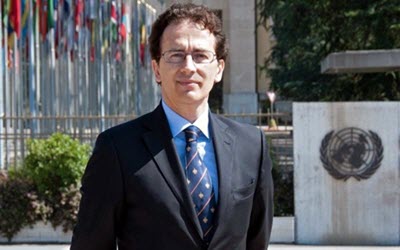 NCRI – Antonio Stango, political scientist, writer and human rights expert, (he is President of the Italian Helsinki Committee for Human Rights), gave an interview to the ncr-iran.org website in which he said the mass Free Iran rally, on July 9 in Paris, was critical in finding an answer to multiple crises in which the Iranian regime was a cause.

As a matter of self-interest, not simply principle, Western governments should support “the brave people of Iran who struggle for their own freedom,” for, in achieving liberation from the “bloody ayatollahs’ regime,” the Iranian opposition would also deliver peace to the region and beyond, he said.

Mr Stango anticipated that, while the rally brought many benefits of communication and co-operation to the Iranian Diaspora and to “prominent personalities from many countries,” the principal boon of the event was that millions of people in Iran “can know that they are not alone.”

Seeing no signs of moderation in the Rouhani regime – “the situation of human rights in Iran has been further worsening” – he expressed his concern that the nuclear deal had simply meant more resources for the regime “to continue supporting terrorist groups abroad and repressing the society within Iran.”

Nonetheless, in spite of these resources, the “regime is still very weak,” and cannot answer “the growing discontent of most of Iranian society,” Mr Stango concluded.

Below is the text of his full interview:

1.Why do you think the “Free Iran” event in Paris on July 9 is significant?

As I have been attending many such annual gatherings, I know that each of them is a great opportunity for tens of thousands of people from all over the world, including Iranians of the political diaspora as well as MPs and a number of prominent personalities from many countries, to show their support for the liberation of Iran from the clerical totalitarian regime, to interact in a constructive way, and to organize networking and coordination for future initiatives. It is also extremely important that millions of people in Iran can see the gathering via satellite TV or the web, and know that they are not alone and we all build together the hope for a free, democratic and peaceful Iran.

2.What makes it different from similar events in previous years?

In the last year the world saw a tragic intensification of terrorist attacks in many countries, and finding a strong answer to this has become extremely urgent for the international community. Meanwhile, several new regional crises have been developing, and the entrance into force of the nuclear deal with Iranian regime is a major event that requires a careful analysis.

3.How do you assess the Iranian situation one year after the nuclear deal? Do you think Tehran is weaker or stronger?

The Iranian regime is now profiting of better international relations, of the availability of more economic resources, and thus of more possibilities to continue supporting terrorist groups abroad and repressing the society within Iran. Moreover, several Western governments are ready to make agreements to host Iranian ‘students’, chosen by the regime, to attend scientific studies that they would be able to use to further develop the capacity to build nuclear weapons. However, a return to the understanding of the reality for the democratic countries is still possible, and the regime is still very weak face to the growing discontent of most of the Iranian society.

4.Has there been moderation by the Iranian regime as some in the West had hoped for after the nuclear agreement was signed?

I did not see any positive develop in this sense. Politically motivated imprisonments and torture, systematic discrimination of women, criminalization of private life behaviors, and executions of death sentences are continuing, even at a faster pace; in general, the situation of human rights in Iran has been further worsening.

5.What message do you think the Western governments should receive from the “Free Iran” gathering?

We need more than ever to say clearly that the bloody ayatollahs’ regime is one of the main problems in the region and potentially for the entire world, and certainly not a part of a solution. Western governments, inter-governmental organizations, and whoever cares for human dignity and for a real perspective of peace should stand side by side with the brave people of Iran who struggle for their own freedom, as well as for a better and safer world for all of us.