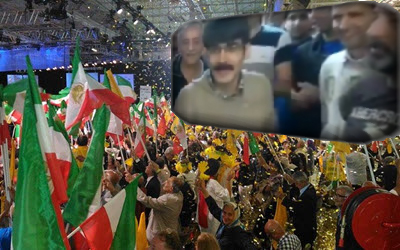 The International Business Times on Tuesday, July 12, published an interview conducted with Farzad Madadzadeh, a former political prisoner in Iran who escaped Iran and travelled to Europe last year.

Sitting on a concrete bollard outside a Paris conference hall, Farzad Madadsadeh, an Iranian dissident and former prisoner of the Iranian regime, is a reserved figure.

The 31-year-old former cab driver from Iran’s East Azerbijan province scratches the already flaking skin on his hands as he recounts the six-year story of his imprisonment in the jails of the Islamic Republic’s intelligence services, the abuse he was subjected to and the deaths of his brother and sister in exile in Iraq.

“Each night I didn’t know if tomorrow evening I would still be alive or if I would be dead. It is hard to describe those conditions because you don’t know what’s going to become of you,” he says, eyes fixed firmly on the ground.

Farzad was arrested in Tehran by Iranian security services in 2009 for his links to the country’s underground resistance and in particular for his work with the People’s Mohajideen Organisation of Iran (PMOI).

The PMOI, which first sought to overthrow the Shah of Iran in the 1970s and now looks to topple the theocracy imposed by Ayatollah Khomeini following the country’s 1979 revolution, is a banned organisation in the Islamic Republic. Links to the group can result in a death sentence in the country’s politicised courts.

For his work with the underground, passing on information from Iran to the PMOI’s leadership exiled in France, Farzad was bundled into a van at gunpoint to Ward 209 of Evin Prison. As far as the Iranian government is concerned the facility, run by the Iranian secret service agency, does not exist but it is infamous as a political prison where dissidents are interrogated, tortured, held without charge and made to endure long periods of solitary confinement.

Two or three times a week throughout his 10-month incarceration in Ward 209 Farzad would be interrogated for in excess of 12 hours at a time. Six months of his time there was spent in solitary confinement.

“I was constantly tortured both psychologically and physically,” Farzad says. “There were three agents that would kick me around like football, each one in turn, one by one,” he adds.

At the time Farzad was told he would be executed, without charge, if he did not publicly denounce the resistance movement on state television. He also would see others the intelligence services sought to break endure even worse torture.

He explains that electrocution with a taser gun and beatings to the soles of the feet with wooden sticks were common. “One of my friends, on his back, they had burned him with cigarettes,” he adds. Of the ordeals they endured, however, Farzad says long periods in solitary confinement were the most feared, as they deprived detainees of the support of fellow prisoners. “Sometimes you know it is really better that you get beaten than spend time in solitary confinement,” he says.

Eventually Farzad did face trial, a process he describes as “a mockery and a show”. Over the course of a five-minute hearing, where he was given no chance to defend himself, he spoke only to confirm his name. Sentenced to five more years in prison, Farzad felt relief at not being given the death penalty in a country that the UN reports year in, year out, carries out more executions per capita than any other state on earth.

“In reality I had prepared myself for the scenario,” he says. “Whatever came, I believe in order to achieve freedom, you have to pay the price.”

Inside the general population of the regime’s prisons, Farzad would continue to witness abuse, beatings and the execution of prisoners convicted as minors. However, he would be returned to Ward 209 as another tragedy befell him outside the confines of his prison cell.

As Farzad drifted towards the resistance, his brother and sister become had also become politicised. The pair had opted to travel to join other members of the PMOI in exile in Iraq at the group’s former military base at camp Ashraf. Disarmed under a truce with occupying US forces in 2009, the camp’s 3,400 residents were guaranteed protection under the Geneva Convention.

When the camp was handed over to the Iraqi government and the pro-Iranian administration of Nouri al-Maliki, Ashraf increasingly became a target. In April 2011 Farzad’s brother and sister became caught up in what US Secretary of State John Kerry would later refer to as “a massacre”.

Thirty-four people were killed at the camp when Iraqi troops opened fire on the residents, herding them into position using armoured personnel vehicles. Farzad later saw footage of the attack. “They slaughtered them in that camp,” he says.

The attack on the camp and a small service that inmates held in commemoration of the dead at Ashraf landed Farzad back in the hands of the intelligence services and returned to Ward 209. The beatings would resume, as would the attempts of a forced confession.

“They had gone and through their agents and killed my brother and sister,” he says with a bitter laugh. “And even then, they would come and interrogate me and try to pressure me to go on to television and speak against my own brother and sister who had been killed,” he adds.

Farzad was released in 2014 when his sentenced ended and after a year of hassle from the security services and refusals for job permits, he decided to flee Iran though his connection to the PMOI. Farzad has requested that details of how he was smuggled out of the country and finally to France not be revealed in case they jeopardised other activists.

Now in France, he remains dedicated to a free Iran. “My life now is for the overthrowing of the regime in Iran,” he says. “It is not so important for me necessary that I will see that freedom myself. What is important is that Iran becomes free.”