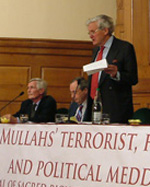 NCRI, October 4 – The following are remarks by Lord Slynn of Hadley on Article 21c of the Iraqi constitution concerning refugees with particular reference to PMOI members in Iraq. He presented his remarks to a meeting jurists and parliamentarians in London on September 13.

I am going to say something on the purely legal aspects of article 21 of the draft constitution as I see it as a lawyer.

Let me just read it to you. I am sure you have already seen it and read it and probably reacted to it. It is quite important to keep the actual words in mind. Article 21 reads…firstly an Iraqi should not be handed over to foreign bodies…that is no concern of ours…political asylum in Iraq should be regulated by law…and political refugees should not be turned over to a foreign body or forcefully returned to the country from which he has fled. This is the interesting part…the part we are concerned with today is the subparagraph C of article 21. political asylum shall not be granted to those accused of committing international or terror crimes or to anyone who has caused Iraq harm.

Professor de Cara and I have already advised a number of points which I will very briefly remind you of. We have said that the members of the PMOI in Ashraf enjoy the status of refugees. They enjoyed it originally under the 1971 Iraqi act of parliament and the present government is bound by decisions of that government as long as the act remains in existence. Secondly the people in Ashraf, members of the PMOI are protected persons under the 4th Geneva convention so they can not be under international law return to any state where their lives their freedom or their security could be threatened. Well the state you have in mind, the state everyone has in mind is of course the state of Iran. What is very important is that last year the coalition authorities accepted that this principle was to be observed and it must go on being observed by the present government of Iraq under international law. Of course Iraq might say we are not party to that convention. That does not matter because the principle set out in the convention are part of customary international law which are binding on all states. It is quite clear that refugees can not be expelled from Iraq to Iran in violation of these principles.

Let us now just look at article 21 which I just read to you. Article 21 particularly paragraph C is a clause which quite clearly takes away the rights of some people from what would otherwise be the protection which their refugee status gives them. In law you have what is called exclusion clause which usually has to be tightly ranged so you do not cut down rights given elsewhere. Let us look at article 21. Political asylum shall not be granted to those accused of committing international or terror crimes or to anyone who has caused Iraq harm. Who can be excluded? Anybody who is accused of committing what specific crime? No specific crime. Quite generally international or terror crimes or to anyone who has caused harm. What harm? Any harm to Iraq. Now that very wide clause in article 21 C …it seems to me that it is quite clearly in conflict with 2 major provisions of the Geneva convention under International law.

Now there are some very useful guidelines which have been issued to explain how these various provisions should be implemented. These are of relevance to what we are discussing today. Let me read the first one. Exclusion clause, a clause taking away a right must be applied scrutiously to protect the integrity of the institution of asylum as recognised by the UNHCR. Note this…at the same time given the possible serious consequences of exclusion it is important to ….with great caution and only after a full assessment of the individual circumstances of the case. The exclusion clause should therefore always be interpreted in a restricted manner. ……But then there is another provision which I think its worth just reading. How do you decide what is a particularly serious offence? To decide whether a particular offence is sufficiently serious the international rather than local scale are relevant. The following factors must be taken into account. Nature of the actual act inflicted, the form of procedure used for the crime, the nature of the penalty and whether most juridicians would consider it as a serious crime. It sets a high standard in deciding serious crimes.

Another article, article 33 of the convention which provides that somebody can not claim that the principle to send him back doesn’t apply to him where there are (notice exact words) reasonable grounds (not accusation) for regarding him as a danger to the security of the country in which he is in or who having been convicted of a final judgement of a particularly serious kind that constitutes a danger to community of that country. Well again a high standard for rules of non-fulfilment?! If you consider the terms of article 21C you will see how different that is from Article 33. Article 21C is not only wide, it is vague and it provides no kind of procedural protection for the person concerned.

Is he or she accused? Well we all know that accusations can be made on terrorist evidence after consideration but we also know that, and you have experience of this, that accusations can be made by people for very different and not always honest motives. They may be based on very slender facts or they may be based on no facts at all. This provides of the constitution does not distinguish between accusation on reasonable grounds and one which is just pulled out of the air or made for some political or ulterior motive. Well what does international law tell us about that. It tells us two things in the guidelines which have been issued by the UNHCR. Notice again high standards that it has set. ‘given that a status determination can never replicate a formal criminal  trial …..it is fundamental that to the decision making process that exclusion on the basis that there are serious reasons for considering that the applicant has committed a serious non-political crime therefore the hearing status- determination can assume the applicant innocent until proven guilty and the benefit of the doubt must be accorded to the applicant given the very serious consequences. And there shall be no automatic assumption, each case being viewed on its own merit. Well you could not have a clearer statement of the importance of looking critically at the kind of material to support the alleged crime or alleged accusation to take away right of asylum.

According to the guidelines of the UNHCR, ‘given the grave consequences of exclusion it is essential that vigorous procedural safeguards are built into exclusion determination procedure. Exclusion decision in principle be dealt with in the context of the regular refugee status procedure and not in accelerated procedures, superficial procedures or in purely admissibility procedures.

A full and legal assessment of the case. In article 21 there is not built in any procedural safeguards into the procedure. I am very conscious as no doubt you are all very conscious that Iraq needs a constitution and given the seriousness we hope that a constitution will be accepted in order that Iraq will be proceeding on in the right direction for the future. I also realise that the draft has been done in a considerable hurry in a very short period. One does not know, probably one will never know how much attention was given to the implications of article 21C. Some people I know have suggested that there is an ulterior motive behind this article which is very suspicious. I say nothing of that but it is plain it seems to me that this article is based on mere accusations with no requirement of serious reasons and no procedural safeguards. No requirement of any adequate basis, no requirement of valid proper measures, it is not valid under international law.

I hope very much that the many lawyers, human rights people and politicians now that so much emphasis has been placed on the defects of this article, the Iraqi authorities with the PMOI and others in mind, with …constitution in mind will have another look as a matter of law, human rights and political correctness that is political constitutional validity that this article simply should not stand.