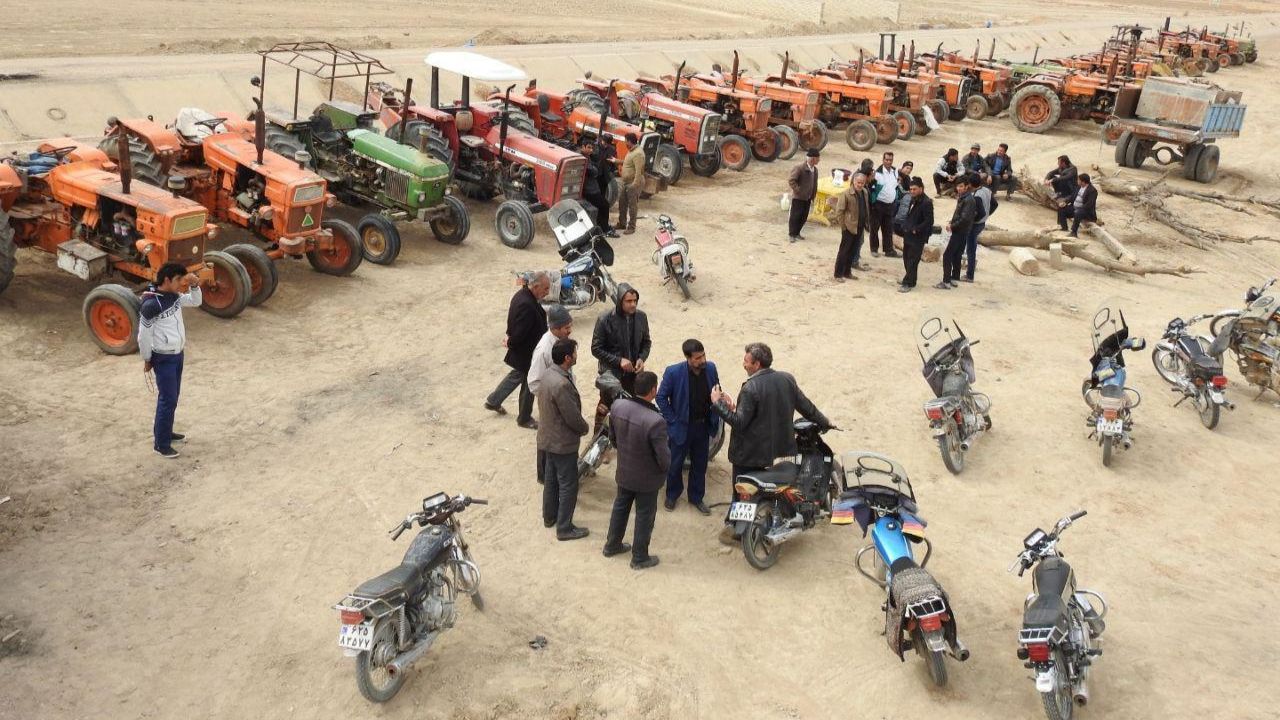 Dictators have been using the “divide and conquer” strategy for centuries. But for Iran’s ruling theocracy with its deceitful essence, this strategy has been a fundamental pillar of policymaking.

Following two weeks of farmers’ sit-ins in the dry riverbed of Zayandeh Rud in Isfahan, security forces stormed their makeshift camp in the early hours of Thursday and burned their tents. The farmers had already been calling on their fellow citizens for a large gathering on Friday and the crackdown only added to the public anger towards the regime and its security apparatus.

Locals who had previously gathered peacefully and were protesting water shortages began chanting political slogans, such as “down with the dictator” and “down with Khamenei”. As the regime sensed the danger of an uprising, it resorted to the usual playbook: deceit and oppression. While the protesters were brutally beaten by anti-riot police and smeared as “thugs and hooligans” by the state media, the regime also attempted to foster dissension among the protesters.

Videos obtained by the People’s Mojahedin Organization of Iran (PMOI/MEK) show several members of Basij paramilitary disguised as protesters, and when people chant “down with the oppressor, be it the Sheikh or Shah,” these Basijis try to divert people’s demands by chanting “Rest in peace Reza Shah” as well as “Reza Shah, where are you? Why don’t you come to our help?”

Since the resurgence of widespread popular protests in Iran in 2018, the Iranian regime’s Ministry of Intelligence and Security (MOIS) has tried to oppress protesters while simultaneously redirecting their demands for a democratic country and regime change.
The first round of major Iran protests erupted in 2018. People’s social demands quickly turned political, with people demanding regime change. The regime’s supreme leader, Ali Khamenei, promptly acknowledged that Iran’s main opposition group, Mojahedin-e Khalq (MEK), played a leading role during the demonstrations. Other top regime officials followed suit.

On April 24, 2020, Iran’s state-run Nasim-e Kermanshah website republished an article initially printed by the state-run Nama News and Nasim News agencies. This article reflected the regime’s fear of the MEK and its impact on society. The post was later deleted and we have resurfaced it for usage. In this article, one of Khamenei’s representatives anonymously acknowledges that regime officials and state media speak of the deposed monarchy as a “distraction” to prevent people from joining or supporting the MEK.

“Then, Haji explained that there is a huge mistake in our media. This mistake is not about ‘Knowing the enemy’ but is about ‘dealing with the enemy.’ Anyone who has worked hard to preserve the inheritance of Imam [Ruhollah] Khomeini clearly knows that the only enemy of the Islamic Republic is the MEK, and that is it. But, once we enter a media war with this grouplet, we see that our writers, those giving speeches, etc. try to tie the monarchy to the MEK.”

“Today, I heard, Commander Kazem Mojtabaei. He said that the MEK and supporters of the monarchy were leading the recent incidents (in 2018),” Khamenei’s representative says. “The problem is that in his remarks, Commander Mojtabaei unintentionally distracted the minds of people and loyal forces of the system from focusing on the main enemy, which is the MEK. How on earth could we describe the monarchy as the main enemy of the system? Have they taken even one serious step to disrupt our national security? Are they even an organized force? They are just a name, monarchy, and some scattered people. Therefore, these people have never been and will not pose a threat to the system.”

Then Khamenei’s representative asks: “Why do you think there are those who clearly know that the enemy is the MEK and that the monarchy supporters are a joke, yet make the ‘sworn enemy of the system’ vague?”

“One of our friends who had fought during the sacred defense [regime’s name for the Iran-Iraq war] and whom I had seen a few times raised his hand and with a simple word gave the answer: ‘Haji, a distraction.’ I heard Haji saying ‘well done’ under his breath,” the article reads.

Isfahan, Nov 26, 2021: A few Basiji forces affiliated with IRGC, tried to divert the protesters' slogans by chanting "Reza Shah rest in peace." The protesters by chanting "Death to Khamenei," shut them down. #Iran #IranProtests pic.twitter.com/hkjdPRniq4

This article further acknowledges that Mahmoud Alavi, the regime’s former Minister of Intelligence, stated, “All media outlets have been notified that wherever they want to warn of the danger of the Mojahedin Khalq Organization, they must mention the name of the ‘monarchy’ or ‘Reza Pahlavi’ next to it. ‘So that the MEK does not stand out in the minds of the younger generations!’

The regime has used this failed “distraction” tactic on many occasions. Following a series of protests in different Iranian cities starting April 2018, the regime tried to divert people’s demands by sending its hired thugs into the crowds and having them chant for the monarchy.

“These groups have become so reckless that they send some people to the parliament with the unprecedented slogans of Reza Shah rest in peace,” wrote the state-run Jomhur-e Eslami outlet on June 26, 2018. They also maneuver freely, with police escorting them. This group is the same group that attends Friday prayers in Tehran and [state-controlled] marches.”

Renowned Iranian teachers’ rights and political activist Hashem Khastar, in a message on Telegram in 2019, underlined that the regime’s impermissible red line is for anyone to associate themselves with the MEK.

“On November 10, 2018, when the security forces had to give in to pressures by the heroic people of Iran and release me from Sina psychiatric hospital, two security agents approached and told me to issue a statement against the MEK because the group has supported me. They emphasized that the red line for them is not the supreme leader but the MEK,” Mr. Khastar wrote.

“In April last year, when the intelligence agents raided my garden, they asked me why I do not work with the Crown Prince Reza Pahlavi? ‘Would you like us to call his mobile for you to talk to him?’ I said no,” he added.

Mr. Khastar added that “the regime is trying to encourage dissidents to move towards the monarchists’ camp and at the same time infiltrate within their ranks to show support for the Crown Prince and attack the regime and simultaneously attack the MEK. In other words, to portray the MEK as the main enemy rather than the Islamic Republic.”

Khastar revealed that the regime tries to buy credit for its agents, and “some of them may even be jailed for a while so that they can hold a better standing among [people] and be able to advance their mission more effectively.”

On a battlefield, commanders try to achieve victory by using a diversionary strategy. They try to convince their counterpart that their main forces are someplace where they aren’t really.

The mullahs’ regime also tries to achieve “victory” or rather hold its grip on power in facing its main enemy, which is the Iranian people and their organized resistance movement. Thus, the regime uses various diversionary strategies to change the course of events or redirect people’s demands from “regime change” and “democracy” to salutes to a deposed dictatorial system and individuals that represent it.

The Iranian people toppled the Shah’s regime in 1979, but the mullahs stole this revolution from Iranians and established their vicious theocracy.

The regime knows that monarchy has little to no support among Iranians. Thus, mullahs try to glue people’s popular protests and demands for democracy to an ousted dictatorship. By doing so, the regime sends this message to the world that my dissidents are supporters of another tyranny, not people who only demand freedom.

Joseph Goebbels, Adolf Hitler’s Minister of Public Enlightenment and Propaganda, said: “Tell a lie that is big enough and repeat it often enough, and the whole world will believe it.” The mullahs in Iran have followed Goebbels’ blueprint, sometimes taking it to the next level.

But this “distraction” tactic and lying will not work. As seen in protests in Isfahan, people chant “down with the dictator,” and silence the shouts in favor of monarchy, and chant against the regime. This is the reality of the Iranian society that yearns for freedom, democracy, and sovereignty.

Previous articleLetter of World Athletes to the UNSG Regarding the Massacre of Iranian Athletes in 1988
Next articleIran News in Brief – November 30, 2021