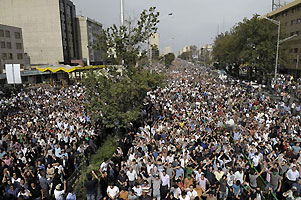 NCRI – On the anniversary of the 2009 anti-regime protests in Iran, a number of state-run media outlets in Iran have intensified a wave of attacks against the People’s Mojahedin Organization of Iran (PMOI/MEK) and the National Council of Resistance of Iran, criticizing their role in the protests.

The main state-run TV channel aired a speech that Mrs Maryam Rajavi, the NCRI’s president-elect, had made before the protest began. In her speech she revealed the mullahs’ plans to rig elections.

The TV channel concluded that the Iranian Resistance has had an extensive role in the protests.

Iranian people took to the streets in Iran to protest the result of the presidential election but very fast the protest turned to an anti-government popular uprising for the downfall of the regime which was brutally suppressed after continuing for 8 months.

Another report said that “from the onset of the riots the PMOI brazenly talked about organized rigging in the election”.

The state broadcaster’s Channel 2 aired the speech by Mrs Maryam Rajavi who said: “We believe in emergence of a power that no other power in the world can withhold,” while referring to the existing potential with the Iranian society for demanding freedom.

The report, which aired on December 29, said: “The PMOI supported the riots more than ever and described the annulment of election results as the begging of the fall of the Islamic Republic.”

A number of the Iranian regime’s institutions and government bodies have pointed out the extensive role played by the Iranian Resistance during the anti-regime protests.