Andrew (MacKinlay, MP) mentioned that there are more people joining in support of the NCRI and I would count myself as one of those people. I have been very impressed by the organisation and the determination to see improvement for the life of people in Iran.

The chilling accounts of human rights abuses in Iran make me believe that it is incumbent upon the British government to take a different position. I think of the tasks ahead when we are considering terrorism in the forthcoming parliamentary session. 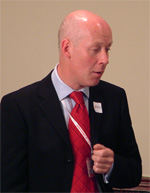 This issue will be on the floor of the House (of Commons) as we debate terrorism, important that it is at this particular time within the history of the world community. Who should be on those terrorism lists? What is the criteria? Does it stand up? And should the Mojahedin be on that list? No it shouldn’t and so Charles Clarke will have to answer those questions. Now Charles won’t be afraid of entering into that debate. He is never afraid of entering in that debate and he will want to have the answers to those questions so I think that in terms of looking for important footsteps forward it offers us an opportunity in the coming months when we debate this particular bill.

I think that it also provides us with opportunity to question the government’s scrutiny of Iran’s involvement in Iraq. And we have seen what has happened by the insurgents and the undermining of the police services, security services in Basra which has been peaceful.

There has been good relationships there between the local community and the British soldiers. We have been seeing great advancements obviously in great contrasts to other parts, in particular in Baghdad. What made those situations go so severely wrong? What
has led to the stand off position now that we have between the Iraqi government and the British army? That can not be in anyone’s best interest.

That can not be what we want to see in the future. So we need to properly scrutinize and understand where those insurgents have come from? who is providing them with weaponry? what is undermining it? Because unless we do that audit, unless we understand where they are coming from, and if it is Iran then we need to expose that and the fingers need to be pointed at the Iran regime. Because if that is continuing to happen we are being blind to that then the resolution and the peace that we want to see across Iraq will not happen.

People can talk about timetables all you like but unless we are actually taking action against those people who are undermining the opportunities for peace in Iraq and peace throughout that region then we will continue with the difficult situations that we face at the moment.

We can’t just be blind to what is happening in Iran because we have been blind to other regimes and look what happened. We were blind, weren’t we, to the Taliban in Afghanistan and look what happened there. You know, a regime using Islam as a weapon of terror. So there are huge challenges for the British government. I support the Resistance of Iran and I have those conversations with colleagues in parliament and whisper in ears when I can.

I hope that this coming session with the very controversial legislation that we will be debating we can actually take some important steps forward for the moral of the National Council of Resistance and the Mojahedin to have the terrorism label lifted from you so we can properly legitimise this concern and with the legitimacy I think that will help within the wider debate in Britain and the wider institutions across Europe which is essential if we are going to make the roads and fulfill the dreams and ambitions of you here today and watching from elsewhere. So that Iran in the future can be a country which is a force for democracy, a force for good within the region and across the world.