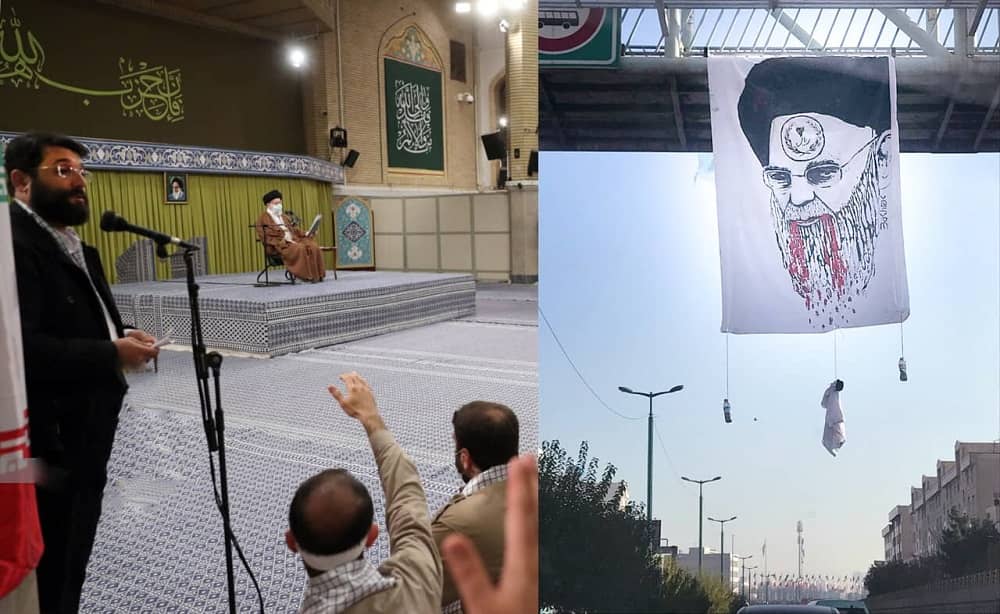 For the seventh time since the beginning of the nationwide Iran uprising in September, the clerical regime’s Supreme Leader Ali Khamenei rushed to the scene to boost the morale of its demoralized Basij forces who have left in absolute deadlock vis-à-vis the people’s unwavering determination to regime change.

From painting protesters as “foreign” agents and minimizing what many consider the country’s democratic revolution, Khamenei had to resort to his worn-out rhetoric in a bid to control his regime’s exacerbating infightings.

He claimed that the nationwide protests were part of the “global arrogance’s failed plot.” Hence, he refused to provide a solution for what he called “the enemy’s deviltries” or at least clarify how his regime controlled the situation. It is worth noting that last week, he bragged about terminating the uprising amid the protests across the country with people chanting “Death to Khamenei.”

Thus, many observers consider Khamenei’s contradictory remarks on Saturday a clear sign of a desperate dictator seeking a way out of a lethal deadlock.

However, Khamenei settled down his score with the rival faction, the so-called reformists, who have been earnestly advising him to yield under domestic and international pressure, give them their share of power, and acknowledge “hearing people.”  This faction, which has been involved in the regime’s crimes against people for years, had been trying to lay the blame for the regime’s violence in the recent uprising and the country’s problems on “rogue officials” while presenting a dictator like Khamenei as a “caring father for the nation.”

“You should act as a caring father to solve problems between the ruling system and people,” wrote the state-run Etemad a so-called “moderate” daily on November 16.

“They write and clearly say we should hear the people’s voice and settle our scores with the United States. What does this mean? We should pay ransom to the great Satan, and once we do it, they want more,” Khamenei said in his speech.

He also added that Tehran by no means is willing to back down from its nuclear ambitions, once again proving that Western governments’ endeavors to revive the highly flawed 2015 Iran nuclear deal have been futile and chasing the wind.

About “hearing the people,” Khamenei reminded the rival faction officials to join the state-controlled ceremonies and hodgepodges, denouncing the organized opposition and people’s demand for regime change.

While referring to the regime’s failed state-staged protests on the anniversary of Iran’s hostage crisis on November 4, he said: “They brag about having a political understanding, but their analysis and words in some newspapers and on social media really disappoint me. They say to hear people’s demands. How about you? Did you hear them during the protests on November 4?”

The outcome of the uprising is that the Velayat-e Faqih regime’s overthrow is inevitable. The suffering and sacrifice of the Iranian people have turned into a weapon firing at Khamenei and his oppressive rule and will eventually destroy the regime.#IranRevolution pic.twitter.com/QcojhmPXjE

In a nutshell, Khamenei’s remarks highlighted that Iran’s ruling theocracy is in a deadlock vis-à-vis the current revolution and how taking even “one step” backward could result in the regime’s immediate downfall.

The so-called “reformist” faction had been of great service to Khamenei, acting as the façade of this brutal regime in order to deceive the world. Officials of this faction have been actively involved in crimes against humanity and stifling any voice of dissent in the last four decades. Naturally, their goal is to preserve the regime, as they see their interest in the ruling theocracy.

But Khamenei cannot accept the slightest rift in his regime. Following the major Iran Protests in November 2019, and after seeing the role of Iran’s organized opposition- Mujahedin-e Khalq (MEK)– Khamenei determined to consolidate power in his regime. He first handpicked the parliament and purged the rival faction. In 2021, he pulled Ebrahim Raisi, an unscrupulous murderer, out of the ballot box. Raisi became the regime’s president only for his role in the regime’s crackdown, particularly his crucial role in the 1988 massacre of over 30,000 political prisoners, mostly MEK members.

Now, Khamenei faces a revolution with the MEK’s Resistance Units network playing a leading role in organizing these protests, as acknowledged by the regime’s authorities. His answer to the nationwide uprising is more violence.

As Khamenei vowed to continue his killing spree, the world community should react accordingly. The Iranian people have continued their protests despite the regime’s attempts to quash them. The only meaningful support of the Iranian revolution is the world recognizing the people’s right to self-defense. This would undoubtedly render Khamenei’s oppressive apparatus more fragile.