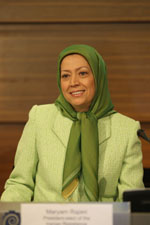 The People’s Mojahedin Organization of Iran (PMOI) is no longer a terrorist organization
The situation of the internal Iranian opposition
Interview with Maryam Rajavi, President-elect of the National Council of Resistance of Iran (NCRI)

The winds of change in Iran are blowing. With this phrase, Maryam Rajavi, President-elect of the National Council of Resistance of Iran (NCRI), expressed her joy over the EU Council of Ministers decision to take the PMOI, an opposition movement against the mullahs in Iran, off the terrorist list.

This label was finally removed at the end of January. In 2002, based on British demands and following the September 11th attacks, in the midst of an extraordinary atmosphere against terrorism, the PMOI was placed on the terrorist list.

The PMOI was formed in 1965 believing in a democratic Islam and aiming to overthrow the Shah’s regime. Today, it is fighting against what Rajavi describes as the mullahs’ religious fascism in Tehran. A number of verdicts by European courts, the last of which was handed down on December, 4, 2008, found that there is no credible or serious legal evidence indicating that the PMOI is involved in terrorist activity. As such, the European case is closed, but in the US, the organization is still maintained on the blacklist. Maryam Rajavi, who leads the opposition network in exile, speaks of an unjust listing and calls on the new US President Obama to remove the PMOI from the blacklist.

Rajavi proclaims that the regime in Tehran used every possible political and diplomatic leverage to keep the PMOI on the list, and also speaks of the crimes and grave human rights violations committed by the current Iranian rulers. When talking about the appeasement policy, Rajavi refers to short-term economic interests pursued by many European countries and says that it was for this reason that they delayed the decision on the PMOI. She especially refers to the inconsistencies with regards to implementing the sanctions imposed due to the Iranian nuclear issue.

In this regard, on the same day that the EU announced its decision vis-à-vis the PMOI, the German government, according to media sources, issued an order to the effect that guarantees for companies exporting to Iran will be stopped. This occurs at a time when despite sanctions, there are signs of a significant amount of exports from Germany to Iran in 2008. The US and Israel are among the biggest critics of the increase of German exports to Iran. They say that by the end of November 2008 German exports to Iran had increased by 10.5%, amounting to 3.58 billion Euros for the year.

As relations between Tehran and the world’s biggest powers, the P5+1 (US, Britain, China, Russia, France and Germany), turn more heated when it comes to Iran’s nuclear program, parties expect to wait and see how the new Obama administration deals with the situation. Brussels says that the doors to dialogue with Tehran have always remained open, while reminding that UN sanctions resolutions are still in effect. Maryam Rajavi charges that the international community has failed to remove itself from the cycle of EU carrots and US sticks.

The NCRI was established in 1981 and is based in Paris. Its founder is Massoud Rajavi, whose location, due to obvious security reasons, is unknown. Maryam Rajavi is the President-elect of the NCRI and appears in public with considerable security protection. Every year in Paris, approximately 70,000 Iranian refugees gather to hear Rajavi reiterate that the solution to the Iranian crisis is neither a foreign military intervention nor the Western, and especially the EU, policy of appeasement vis-à-vis the mullahs, which has been pursued during the past two years. According to the NCRI, the third option is democratic change in Iran by supporting the Iranian people and their resistance movement. We shall wait and see whether Obama will take this path or whether he has another third option in mind.