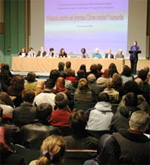 NCRI – An international conference entitled "Violence Against Women, Crime Against Humanity" was held in north of Paris on November 26, to deal with growing threat by fundamentalism against women’s rights in various countries in particular Iran, the heart of Islamic fundamentalism.

The International Federation of Women against Fundamentalism and for Equality and the Women’s Committee of the National Council of Resistance of Iran initiated the event to mark the International Day for the Elimination of Violence Against Women.
Distinguished women’s rights activists from across the world including the United States, France, Britain, Sweden, Spain and Italy addressed the conference. Representatives of the Iranian Resistance also spoke of their experience with the fundamentalist rule in their homeland.
Mrs. Maryam Rajavi, the President-elect of the NCRI greeted the event in her message and said: “On the day when the world expresses solidarity with the victims of violence, I ask for your support and that of all gender equality activists for Iran’s oppressed women. These women are being humiliated under the clerical regime’s pressures, imprisoned, flogged, hanged, stoned to death and have no refuge.
“I stretch my hand to you for helping us defend them and support the Iranian Resistance movement that is striving to liberate them. The liberation of women and humanity is not just a dream. Women’s struggle and solidarity can and will defeat the tragedy of violence.”

Previous articleIran-Italy: Death order of an Iranian in Rome was signed by Khomeini
Next articleEU, Iran having hard time getting talks re-started: diplomats