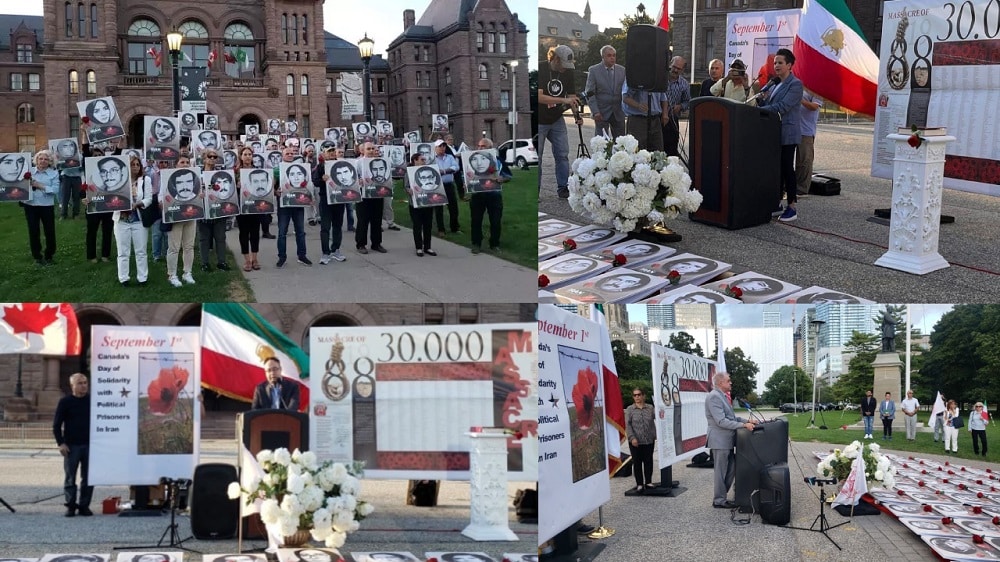 On Wednesday, August 31, honoring the martyrs of the 1988 massacre in Iran, the Iranian Canadian community and the families of the Iranian regime’s victims, supporters of the National Council of Resistance of Iran (NCRI), held a rally at Queen’s Park, Toronto.

Established by a unanimous Canadian Parliamentary Motion in 2013, September 1 has been named the “Day of Solidarity with Iranian Political Prisoners”, realizing the crimes committed by the Iranian regime against humanity and the slaughter of 30,000 political prisoners in 1988 in Iran.

A large exhibition was also held at Queen’s Park, showcasing gross human rights violations in Iran, especially the 1988 massacre of political prisoners, and other atrocities committed by the ruling elite in Tehran.

Referring to the upcoming United Nations General Assembly in September in New York, the Iranian Canadian community demanded that the Iranian regime’s president Ebrahim Raisi should not be allowed to attend and granted international legitimacy and attention. 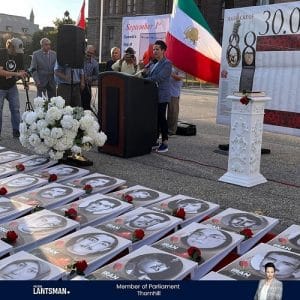 Addressing the Iranian Canadian community at the event, member of Canadian parliament for Thornhill Melissa Lantsman said: “We will never forget these brave souls, nor the causes for which they gave their lives. And this horrific massacre didn’t just happen in the past, it continues to happen today. Under the current regime, 582 people were executed, including women and children. Horrific stories of torture are too common, and they continue now in a nation where fundamental freedoms have been at risk for more than 40 years. We continue to see further erosion of those human rights, of justice, of the rule of law, and everything that we hold dear here in Canada.”

Referring to the IRGC’s shooting down of the PS752 Ukrainian airliner, the Canadian MP added: “176 innocent lives were taken in a blatant act of terror and we should never forget it. Fifty-five of those were Canadian citizens. The IRGC never cooperated with international investigations. They never expressed even an ounce of remorse for this horrific act. That’s who we’re dealing with. And the families of the victims here in Canada and across the world deserve justice and a government that will stand alongside them in their pursuit of justice. PS752 is just another incident in a long stride of unthinkable abuses from Iran.”

“We should never, ever be silent about these atrocities. And today, on this anniversary, we can not only remember and reflect, but we also need to recommit. Recommit standing up for freedom and human rights in Iran. It doesn’t mean just words. It means stricter sanctions. It means a greater effort alongside our allies. And it means finally designating the IRGC as the terrorist organization that it is. And I know that the Iranian people will be free. I know that they want to be free. Despite the crackdown, we’ve seen thousands of protests continue across the country. The unprecedented fivefold growth of the resistance unit shows that Iranians are critical and courageous, and they will not be intimidated for supporting freedom.” 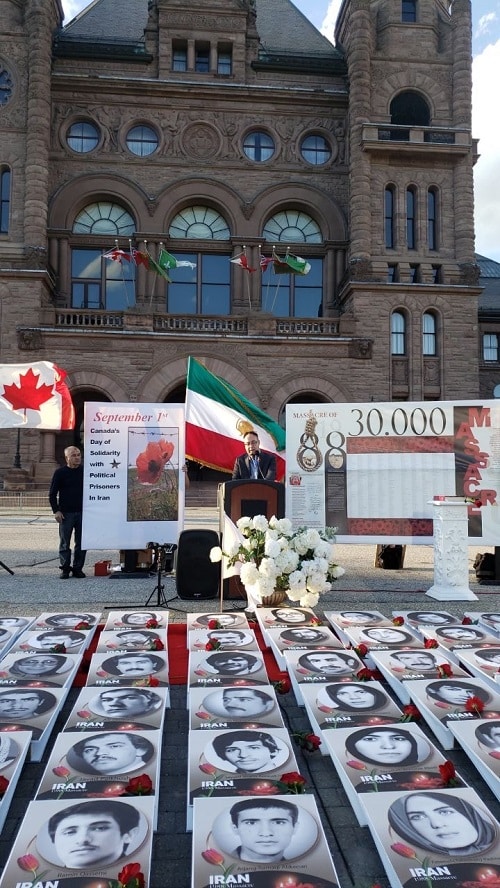 Recounting his experience in visiting Ashraf 3 in Albania, member of Parliament for Flamborough-Glanbroo Dan Muys said: “Canada will always stand up for human rights, freedom, and democracy. That is our legacy. That is what Canadians are all about. And so we have not stood idly by in cases of human rights abuses in Iran and elsewhere in the world. But it’s particularly important now that we continue to speak out.”

“One of the leading people on the death committees of 1988 is now the President of Iran, Ebrahim Raisi,” Mr. Muys added. “I think it speaks volumes about the desperation of the regime that someone like that was put in place a year ago and at this point in the history of its regime because his record on human rights abuses is quite startling.”

MP Dan Muys also mentioned in his speech that despite the economic hardships and the intensifying of human rights abuses in Iran, more protests and more uprisings are happening inside the country, and he expressed hopes that the Iranian people will finally achieve freedom and democracy that they have been yearning for.

Mr. Irwin Cotler, the former Minister of Justice and Attorney General of Canada also gave an online live speech to the participants in Toronto. Referring to the process of passing the bill by the Parliament of Canada and the designation of September 1 as the day of Solidarity with Political Prisoners in Iran, Mr. Cotler noted that it was adopted by a cross-party confluence in 2013.

In his speech, Mr. Cotler also said that the culture of impunity has been institutionalized in Iran, and those who should be questioned and tried for violating human rights have been placed in the highest government positions.

“We call on the Canadian parliament and the Canadian government to hold president Raisi and other members of the death commission responsible for this mass murder and crime against humanity. There is no statute of limitations for such crimes against humanity. We call for the bringing to justice of all those responsible for the criminal act of terror and the downing of flight 752 to secure justice for victims and accountability for the human rights criminals,” Mr. Irwin Cotler concluded his speech.

During the gathering, members of the Iranian Canadian community and families of the Iranian regime’s victims called on the Canadian government to sponsor an international commission of inquiry into the Iranian state officials’ responsibility and hold them to account for genocide and crimes against humanity during the 1988 massacre and downing the PS752 airliner.