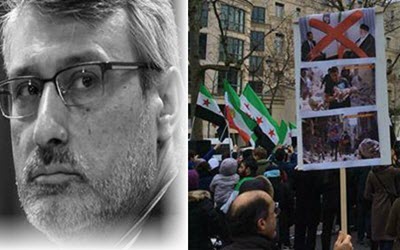 NCRI – Infuriated by the widespread protest rallies in front of regime’s embassies in Turkey, France and England, the Iranian regime’s ambassador to London ‘Hamid Baeidinejad’ wrote: “making use of the Western media news flow, some ill-disposed groups tried to gather unaware people for protesting in front of Iranian embassies… credible information shows that the PMOI has under the disguise of humanitarian support of people in Aleppo played a key role in such activities. Let’s be vigilant.”

It should be pointed out that on Saturday December 17, widespread demonstrations were held in front of regime’s embassies in different countries, during which the demonstrators condemned the killing of people in Aleppo by the Iranian regime’s Revolutionary Guard.

Reporting on the demonstration in Paris, Aljazeera said that “representatives of the MEK also took part in the demonstration, carrying torches in solidarity with people in Aleppo while chanting slogans against the Iranian regime’s crimes in Syria.”

Also Al Arabiya TV reported from Paris: “the demonstrators in front of the Iranian embassy in Paris are chanting ‘Putin is a murderer, Khamenei is a murderer’. They ask for the Iranian regime’s withdrawal from Syria and Aleppo, chanting ‘Iran, get out and Aleppo will set free’.”

Likewise Anadolu news agency reported that members of popular organizations as well as a group of Syrians in Turkey held a protest rally in front of Iranian regime’s consulate in Istanbul, condemning the killing of civilians in Aleppo by mercenaries backed by the Mullahs’ regime. The demonstrators chanted “Murderos Iranian regime, get out of Syria”, “Aleppo will turn into Iranian cemetery”, “People of Aleppo are not alone”, expressing their hatred from the crimes committed by the Assad and Iranian regimes.

Previous article
UK Parliament Condemned the Wave of Executions in Iran
Next article
Iran Regime’s MP: We Do Not Anticipate the Government to Create New Jobs, Just Keep the Existing Ones