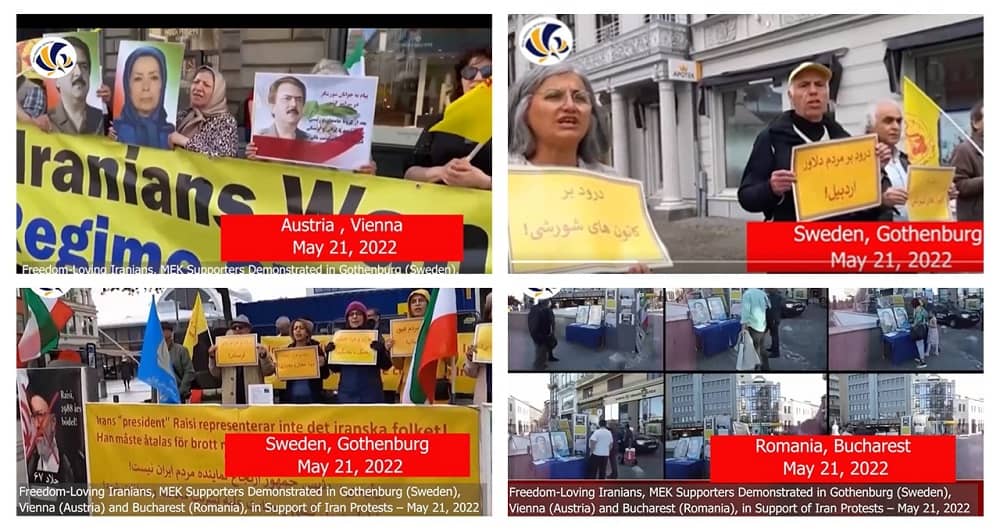 As protests span across Iran, freedom-loving Iranians and supporters of the People’s Mojahedin Organization of Iran (PMOI/MEK) hold rallies across the globe to echo the voice of their arisen compatriots.

On May 21 and 22, MEK supporters held rallies in Gothenburg and Vienna, denouncing the ongoing human rights abuses in Iran and the western governments’ inaction toward Iran’s deteriorating human rights situation.

On May 14, Iranians and the MEK supporters gathered in Berlin, Stuttgart, Heidelberg, Gothenburg, Ottawa, and Bucharest, calling for regime change and supporting the recent Iran protests. They held different signs and banners, urging the world community to stand by the Iranian people and support their aspiration for having a free country.

Some of the slogans the freedom-loving Iranians chanted during their demonstrations include:

These protests coincided with the protests in dozen Iranian cities, which erupted due to skyrocketing prices and the regime’s disastrous policies that have exacerbated Iran’s financial calamity.

Moreover, on May 22, dozens of cities across Iran witnessed protest rallies by retirees and pensioners of the Social Security Organization, who continued their gathering from previous weeks and months, demanding an increase in their pensions as an immediate measure to address their growing woes as Iran’s economy suffers from the regime’s massive corruption mismanagement, and ineptitude.

During their rallies on Sunday, the MEK supporters in different countries in Europe also supported the brave retirees who have been continuing their protests in Iran for months.

The freedom-loving Iranians also urged the international community to prosecute regime officials for their role in human rights violations and export of terrorism. They particularly called for holding Ebrahim Raisi, the regime’s president, accountable for his role in the 1988 massacre of over 30,000 political prisoners, who mainly were MEK members.

From dusk to dawn, in unbearable cold or overwhelming heat, these freedom-loving Iranians have staunchly supported the cause of freedom for Iran. They have persevered and called for their compatriots’ rights in Iran and their human rights as western governments try to continue their wrong policy of appeasement of the regime in Tehran.

A shining example is the MEK supporter’s nine-month sit-in in Stockholm, Sweden, where Hamid Abbasi (Noury), a former prison officer involved in the 1988 genocide, was on trial for crimes against humanity.

As Noury’s trial advanced, the MEK supporters traveled from across Europe to gather in the subzero temperatures to voice their demands.