Iranians, MEK and NCRI Supporters Hold Rally in France on the Anniversary of Anti-Monarchic Revolution 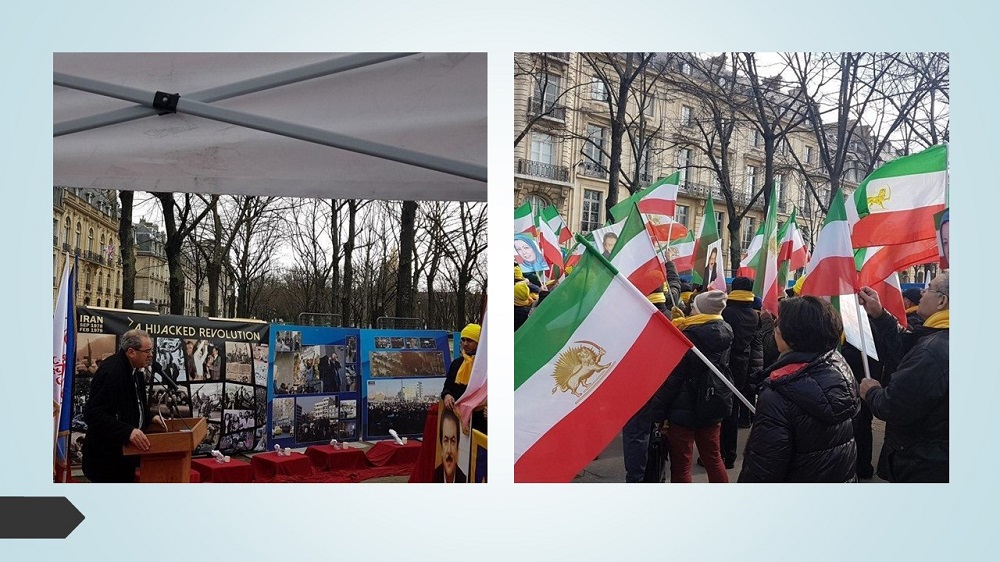 This rally was also attended by renowned French lawmakers and politicians

Iranians, supporters of the People’s Mojahedin Organization of Iran (PMOI, Mojahedin-e Khalq or MEK) and the National Council of Resistance of Iran (NCRI) in Paris, France, on Tuesday held a rally on the anniversary of 1979 anti-monarchic revolution and in support of the Iran Protests and in line with other Free Iran rallies around the world.

The demonstrators also expressed their support for the call by Mrs. Maryam Rajavi, NCRI’s president-elect, on the international community to acknowledge the reality that the religious fascism ruling Iran does not represent the Iranian people and to recognize the Iranian people’s right to overthrow this regime.

#FreeIran
Iranian exiles in Paris stand before pictures of #MEK members killed by Khomeini's regime in #Iran who stood against a religious rule and wanted democracy instead. https://t.co/uoSIDkEPpA

The MEK and NCRI supporters paid tribute to those men and women who sacrificed their lives to topple the Shah’s dictatorship and those who have continued the struggle for freedom and democracy in Iran and paid the ultimate price by giving their lives. Participants also paid tribute to the memory of Mousa Khiabani, a leading MEK official and Ashraf Rajavi, a resistance heroine (and wife of Mr. Massoud Rajavi, the leader of the Iranian Resistance), who were slain in 1981.

MEK supporters in #Paris tweet their rally for a #FreeIran2020 and vote to #BoycottIranShamElections
They hold a lengthy flag, of which is recognized as a free Iran.https://t.co/wzy5aIfjwX

This event was also attended by French lawmakers André Chassaigne, President of the Democratic and Republican Left group; Philippe Gosselin and Frédéric Reiss from the French Republican party; Michèle de Vaucouleurs and Brahim Hammouch from the Democratic Movement.

French politicians and mayors present at the Iranians' rally marking 41st anniversary of anti-monarchy revolution in #Iran.
They want #IranRegimeChange by the people and know both Shah & Sheikh to be killers of political movements. https://t.co/QWa7op0HOW

The lawmakers were members of the Parliamentary Committee for a Democratic Iran (CPID) chaired by Michèle de Vaucouleurs, MP from Yvelines. The CPID played a significant role in the National Assembly to publicize the current Iranian situation, in particular, the opposition of the Iranian people to the mullahs’ regime and to echo the aspirations of the Iranian people for freedom and democracy through a pluralist and secular system, represented today by the National Council of Resistance of Iran.

Former Secretary of State for Foreign Affairs Alain Vivien and the Mayor of Paris’ 1st District Jean-François Legaret were also present at the MEK and NCRI supporters’ rally.

Participants and speakers condemned the Iranian regime’s brutality in dealing with protesters during the nationwide Iran protests in November and January. They also paid tribute to over 1500 martyrs of the Iran protests and echoed the Iranian people’s desire for the regime’s overthrow and chanted slogans in this regard such as “Down with dictator, whether the Shah or the [Supreme] Leader.”

The participants in Paris also called on the international community, in particular France and the European Union, to condemn the clerical regime for its countless crimes and to stand with the Iranian people and their desire for the establishment of a pluralistic and democratic government.

Previous articleLatest News in Brief- February 12, 2020
Next articleIran’s Regime Struggles to Promote Narrative of Popular Support on The Anniversary of The 1979 Revolution