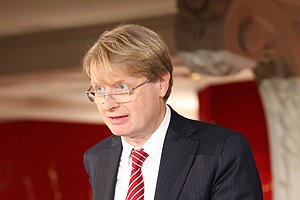 Italian Senator Lucio Malan has issued his support for the gathering of the Iranian Resistance in Villepinte, Paris, on June 13 to make a stand against a regime that is a ‘danger to the region and the whole world’.

Mr Malan also warned against the prospect of a nuclear Iran, and a deal with the West that offers no safe provisions to prevent the mullahs obtaining a nuclear weapon.

He said in an interview with Simay-e Azadi TV: “This is why it’s very important to support the only actor on the scene that can face the regime of Tehran, a regime that has killed liberty, that kills its opponents and that is a danger for the whole area and for the whole world. And this actor is the Iranian Resistance led by Mrs Rajavi.

In addition to Iranians, some 1,000 political figures, activists, and religious leaders will participate in the rally, representing over 100 countries, five continents, and a range of socio-political backgrounds, and will all call for regime change and a free, democratic, non-nuclear Iran.