Today, July 14 2019, on Day 4 of the Free Iran convention at the compound of the People’s Mojahedin Organization of Iran (PMOI, Mujahedin-e Khalq or MEK) in Albania, there’s a major international conference on the Iranian regime’s terrorism, nuclear and missile programs and the role of the Iranian opposition in bringing about regime change in Iran. We’ll be updating this page live as the event unfolds.

Read more about the & explain how important it is for the whole world. Iran’s theocracy has no place in the 21st century” .” pic.twitter.com/ySiDUwu3yU

The people in Iran and their struggle is the best sign of change to come to Iran. We can see that the mullahs are using Iranian wealth for their private interests. They are using the Iranian people’s money for terrorism and accelerating war in the Middle East. We do have a great responsibility and a duty towards the Middle East, and we should conduct this together.
With the protests in Iran, we can also see that toppling the Iranian regime has to happen from within the country, and we have to support it from the outside. The change must come from within and from Ashraf 3.
You have a president who with her ten-point plan, which is very convinciing, has created an alternative which represents freedom and democracy. This is also our choice for the future. From a European and German angle, we need to step forward and support this ten-point plan.” 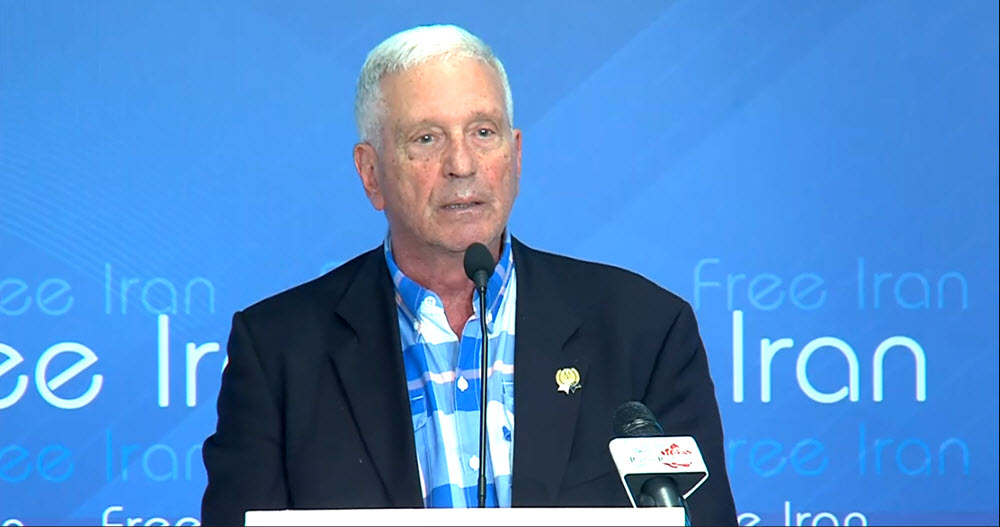 “In 2004, the PMOI were on the EU and US terror lists. (Both the EU and US delisted the group after the High Courts found there was no evidence that the PMOI were terrorists.) Back in 2004, when I was in Ashraf 1, the FBI interviewed all Ashraf residents, taking all of their fingerprints. They did not find a single terrorism supsect.
The American officers and soldiers in Ashraf 1 were impressed by your dedication and political program. The very people who were holding you in Ashraf were convinced about you.
40% of the resistance fighters in Ashraf 1 were women and this is very important against the mullahs’ regime. Back in the years, we had some friends and yet still a lot of people who still didn’t understand. Now, a lot of people who used to not understand that you are the main resistance movement, they are beginning to understand, all because of your work and program.
There are still a lot of people in Europe who have not understood that appeasement is not the way forward, and don’t care about human rights. Huge support is growing for this movement and we have work to do.
Human rights should be the most important aspect in dealing with the regime in Iran.
Ashraf 3 is a wonderful achievement. This is an important part of the resistance. The fight to overthrow the mullahs is taking place on the streets of Tehran. Your program will be an essential contribution to that.
Thank you for your wonderful spirit of resistance.”

“We in the UK Law Society have and will support your cause for a free Iran. We want freedom for you. I couldn’t believe what a wonderful community and spirit is in Ashraf 3. This is not a town, it lives and breathes. The mothers and daughters who have suffered so much are so positive in spirit. This is a wonderful community of people.
If you are the beating heart of Ashraf, Madame Maryam Rajavi holds the soul of Ashraf and will take it forward to free Iran.
When I saw the human rights exhibition in Ashraf 3, I was simply overwhelmed as it brings to life the horror that has happened in Iran. Even in that most depths of horror, there is still hope for the future. That exhibition must be seen by the world.
I believe that we are now so close. I want for all the men and women of Iran to have freedom. Next year we will be in Tehran.” 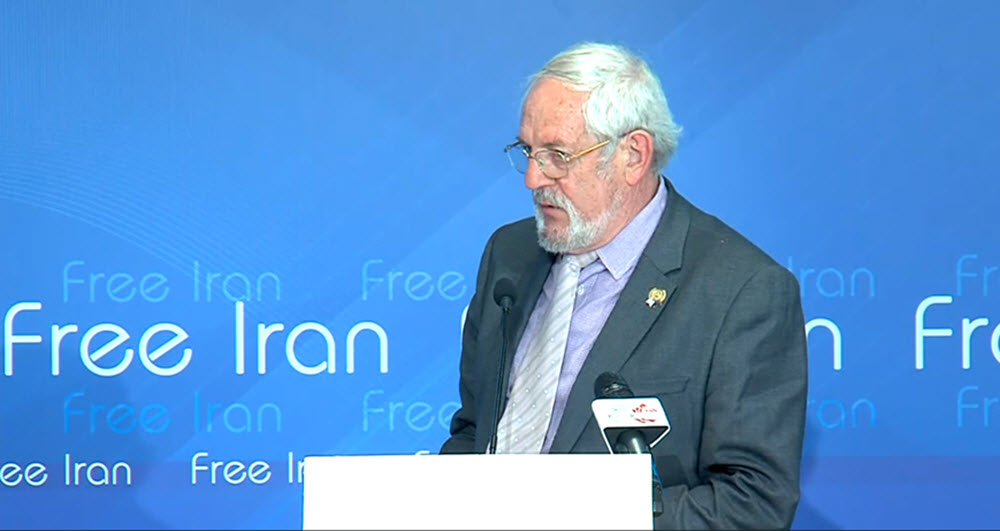 “We have been supporting the PMOI in Ashraf for a long time now. We belong to your supporters in Australia, due to their dedication. Your integrity and commitment, to serve the best interests of Iran, without any idea of how long this may take, this draws our affection. We want to see what you want to see. We will make your voice known in Australia and we will do it with the greatest of confidence. I’ve decided that I’m an honorary member of Ashraf. I belong to what you believe in and I belong to you. When Iran is free, we will be part of this great story.” 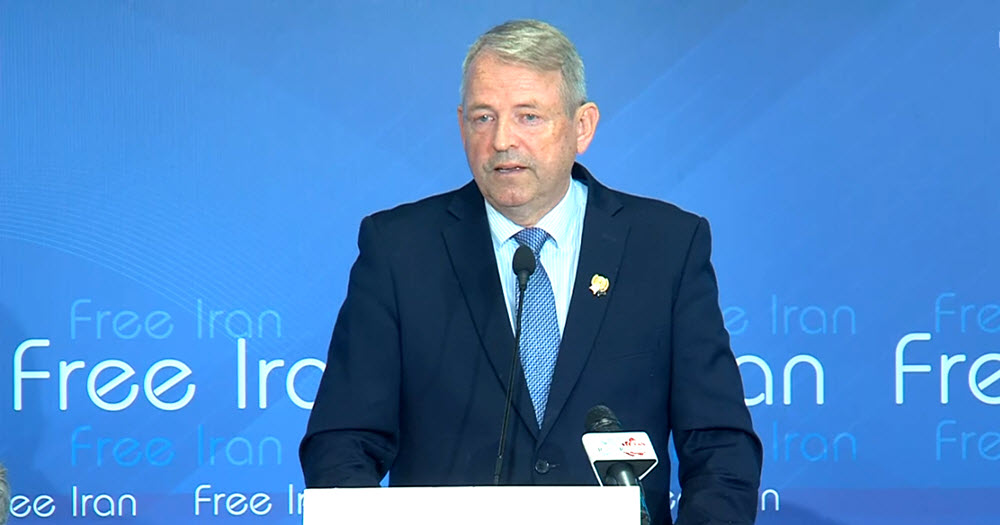 “In 2005 my wife and I visited the MEK in Camp Ashraf in Iraq. After the first two days in Ashraf, my wife said I have never experienced such love. Ashrafis are people of integrity and love. It is the complete opposite of the regime in Iran.
The Iranian regime’s Ministry of Intelligence and Security (MOIS) and Revolutionary Guards (IRGC) are rightly blacklisted.
Iranian agents in Oslo are representing themselves as refugees to spread misinformation about the MEK. This shows the Iranian regime is desperate.
The leadership of this movement through Madame Maryam Rajavi is realizing amazing results. I always say I am a member of this movement and always will be.” 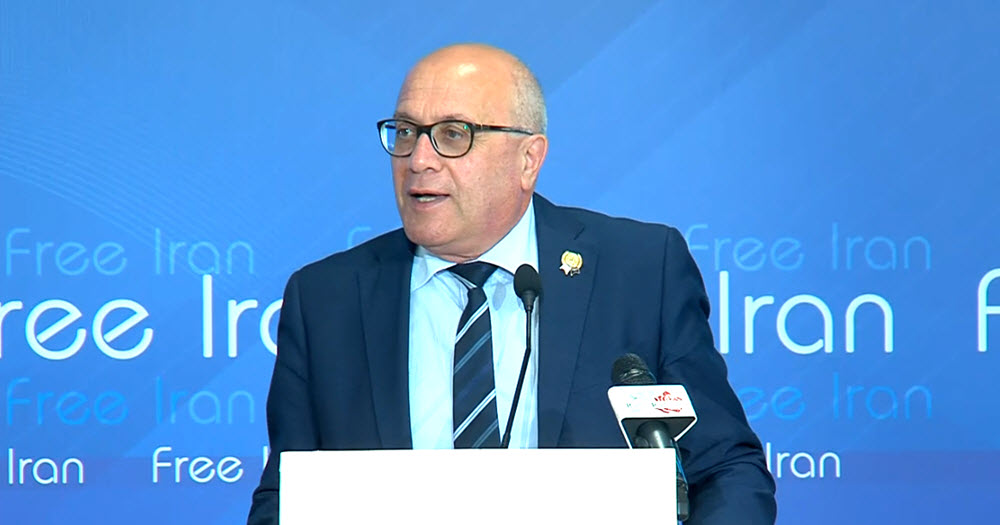 “I want to convey support from the Nationalist Party of Malta to the people of Iran.
We have heard horrifying testimonies about human rights violations in Iran. We were sad, angry and yet even more determined. We want to support our Iranian friends in their fight for freedom. This has become a personal matter for me now. To the MEK in Ashraf I say your cause is our cause. Your pain is our pain, your fight is our fight. God willing, your victory will also be our victory. We salute your bravery.
The Iranian people are being denied of their universal rights. The Iranian regime funds terrorism and threatens the world with nuclear proliferation. This regime is responsible of crimes against humanity that are punishable under international law.
Our presence in Albania is a testimony to the people of Iran and a strong message against appeasement vis-a-vis this atrocious regime. This same regime sought to bomb the 2018 Free Iran conference in Paris. Yet we are back in full force. We will not be bullied with suppression. Terror attacks by the Iranian regime will never break the determination of our free world to realize a free and democratic Iran.
As Madame President Rajavi has said, regime change is the task of the Iranian people. We should support the Iranian people at all times.
Our message to the people is: We will never abandon you until your justified cause is fulfilled. You are, indeed, our heroes. Our common mission is a free Iran. 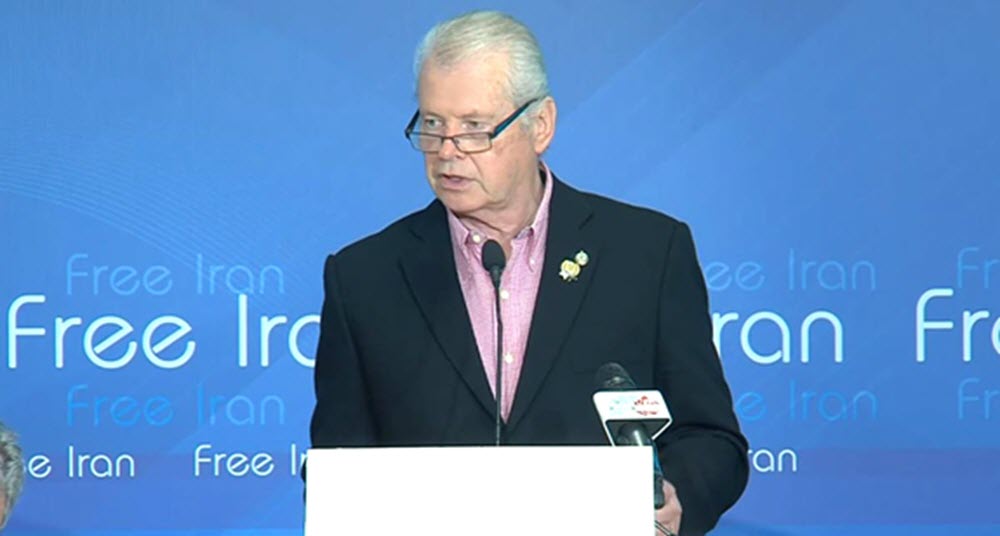 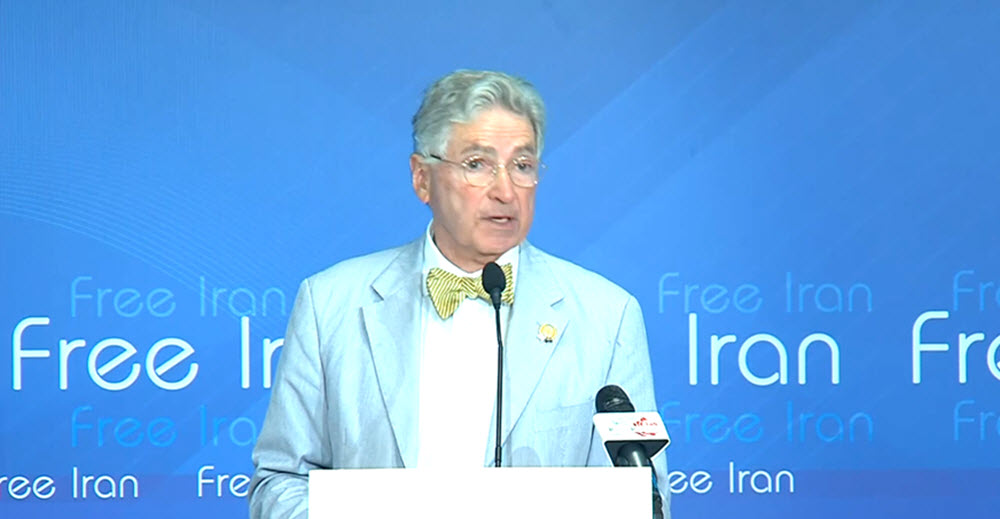 “I have long felt solidarity and compassion with the MEK, for your cause, for the Iranian people and the ten-point plan of Madam Rajavi. I have spoken about your cause and about the summer 1988 massacre, and the execution of 120,000 Iranians by the mullahs’ regime. Human rights violations in Iran are so massive that they constitute crimes against humanity.
The mullahs are not just going to roll over. Change, however, must come from within. I wish you success, perseverance, peace and happiness in Iran.” 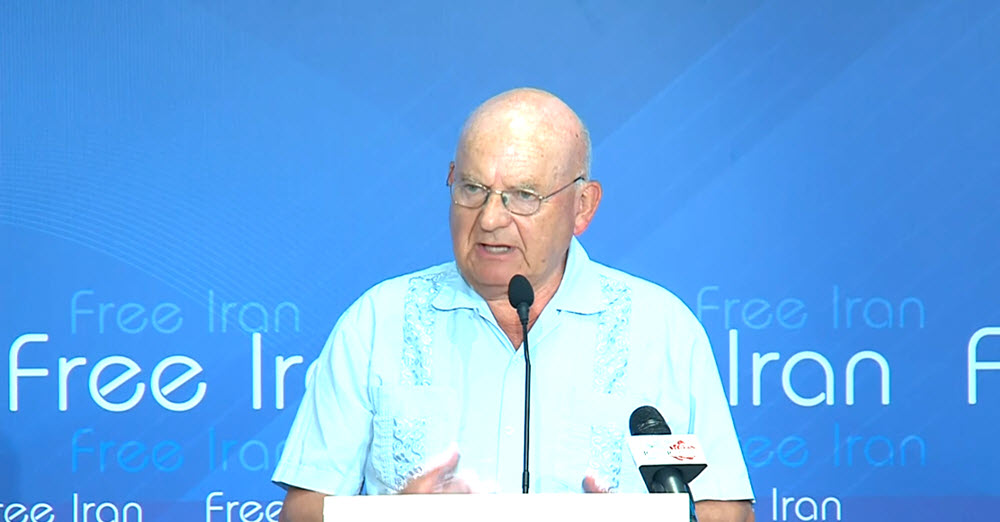 “We have been showing solidarity with the workers in Iran who face brutal repression. We have been educating various industries in order to support Iran’s workers.
Many of you have heard of Nazanin Zaghari-Ratcliffe. She was arrested as a spy in Iran by the regime and separated from her baby. The mullahs didn’t even give her decent medical attention. This is an outrageous example of the mullahs’ treachery. The mullahs’ attitude are making people understand far more about the need to support the Iranian Resistance and regime change in Iran. The evidence is here. Public opinion is strong and we will continue to campaign until we win.” 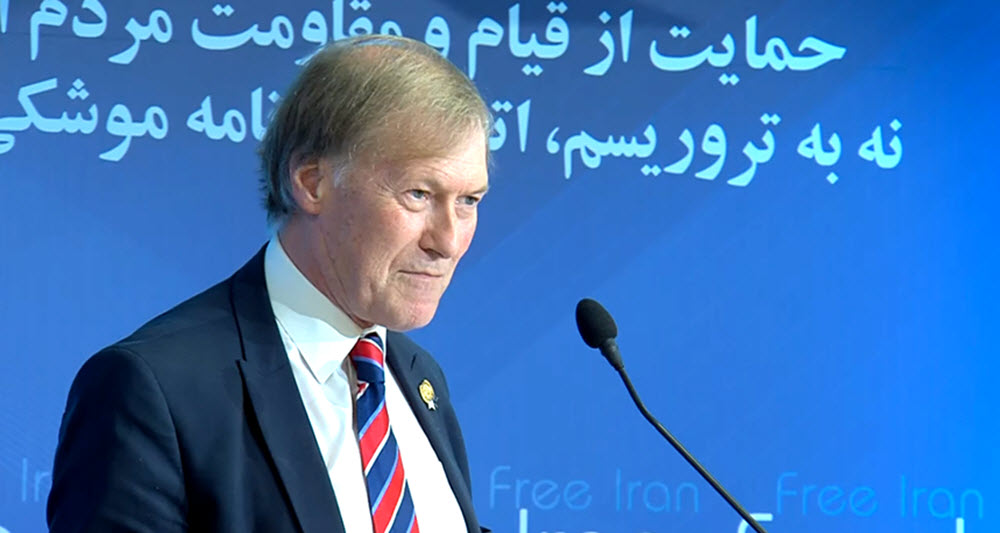 “This Free Iran conference and gathering in Albania is all about democracy.”

“What an example of the MEK to build such a wonderful camp in such a short period. It is absolutely magnificent. It is wonderful being with people who seek to establish freedom and justice for the Iranian people.”

Previous article
Live Updates: Annual Free Iran Conference at the MEK’s Headquarters in Albania
Next article
Arab and Islamic Solidarity With Iran’s People, the MEK and the NCRI