LIVE PAGE: Perpetrators of Iran’s 1988 Massacre Must Be Held Accountable 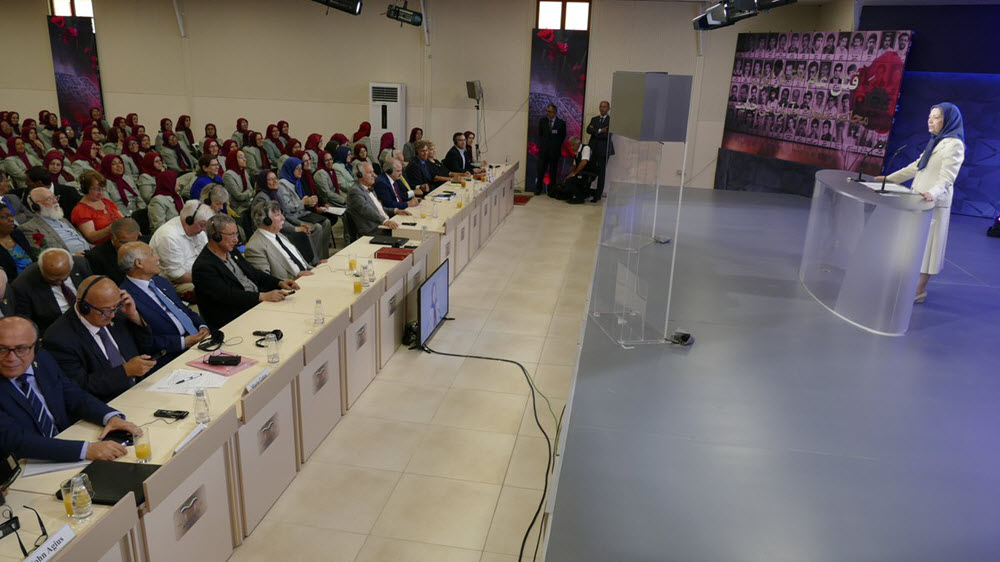 In the summer of 1988, Iran’s regime summarily and extra-judicially executed tens of thousands of political prisoners held in jails across Iran. The massacre was carried out on the basis of a fatwa by the regime’s Supreme Leader Ruhollah Khomeini. Death Commissions sent victims to the gallows after mock trials. The vast majority of the victims were members of the main opposition People’s Mojahedin Organization of Iran (PMOI), also known as the Mujahedin-e Khalq ( The facts:
• 30000+ political prisoners were killed in Iran
• The 1988 massacre was based on a fatwa by Khomeini
• Most victims were activists of the PMOI (MEK)
• Death Committees approved the verdicts
• Perpetrators have never been brought to justice Conference demanding prosecution of its perpetrators and masterminds at an international court – Ashraf 3 was the horrifying scene of such historic confrontation, but it was not the end. It was the beginning a new confrontation which still continues and will write the fate of the Iranian nation in freedom.

— Maryam Rajavi (@Maryam_Rajavi) in was to totally uproot and obliterate the Mojahedin. To this end, he deployed his killing machine in several areas. The most intense killings began in Evin and Gohardasht prisons, aimed specifically at members of the PMOI/MEK. took place in at least 110 cities. have not been limited to human rights, and the perpetuation of torture and executions, but have emboldened the Iranian regime in export of terrorism and warmongering

— Maryam Rajavi (@Maryam_Rajavi) all across . They have built buildings or roads on these grave yards, or have bulldozed them and turned them into new cemeteries.

— Maryam Rajavi (@Maryam_Rajavi) , and the world to recognize the right of the people of to resistance and struggle to overthrow the mullahs’ religious dictatorship. and abroad to help advance and expand the Call-for-Justice movement for the victims of the . This is the movement of the oppressed, the suppressed and the bereaved. . , this is a crime against humanity. Not only had the criminal code of Iran been violated, but also the known international norms were trampled during & before this crime.” of political prisoners in Iran.” . The documents are available. We made it available to the UN” not only as a crime against humanity but also possibly a genocide.” , published separately by the JVMI, is the location of the mass graves. These locations are very well identified. Anyone who challenges these docs, we invite them to go to the sites & verify for themselves” . We’ve identified 120 countries that could entertain the judicial process of crimes against humanity, crimes of war & genocide. We’re not dreaming. The situation changes.” witness Kobra Jokar: “In prison, there was no doctor or medication for the children. In the public ward, there was only 15 minutes of warm water per day, which we had to use to give the children a bath. Many of these children had lost their parents.” witness Hengameh Haj Hassan: “We were blindfolded & put in cages, small partitions where you could only squat. You couldn’t move. If we moved, we were tortured. My eyesight was degraded & my back was injured. Despite 5 operations I’ve still not recovered.” witness Homa Jaberi: “After 40 days I was taken to Evin Prison. Some of my friends had lost their mental balance. Some prisoners would not speak of the tortures they suffered. The torturers had made them make animal noises & insult themselves. Some were raped.” witnesses Majid Sahebjam: “I spent 17 years in prison. My ‘crime’ was supporting the MEK. The 1988 massacre was a premeditated and well-planned crime. Some of the people who were directly involved in this crime still hold high positions of power.” survivor Mostafa Naderi “After 8 months of torture, 6 of us were taken to a mullah who said we’d be executed that night. They lined us up, tied our hands & we heard the guns being loaded. They fired but it was a mock execution. It was a traumatic experience.” witness Mahmoud Royaie: “Iran’s regime even executed the disabled & handicapped. Yet these prisoners stood tall when they went to the gallows. 1 of my friends had lost his mental balance from torture. But he defied the judge & said ‘I’m a Mojahed.’ He was executed.” themselves speak to us. We can no longer be observers, albeit sympathetic. We must be responsible. When we become witnesses, the law of men forbids us from remaining silent & doing nothing.” . It’s difficult to find any reason in anything we have heard. I’m from a different faith & nationality, but I’ve committed myself to your struggle for a .” : “This exhibition is only the tip of the iceberg. In 2 yrs the regime executed 477 minors including three 12-year-olds. 8 were 13 years old. 19 were 14 years old. 32 were 15 years old. Others were 16 & 17 years old” .” pic.twitter.com/s78h7BrOP4

Previous article
Live Report From Women’s Rights Panel on Day 4 of the Free Iran Convention at the MEK’s Headquarters
Next article
EDITORIAL: Five days that can shake Iran