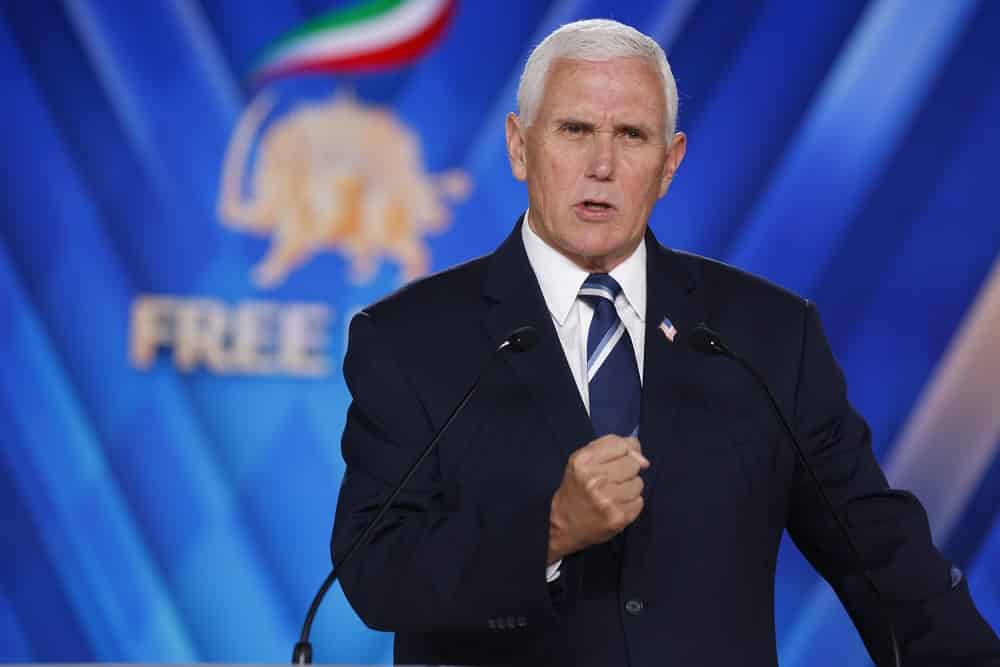 Former US Vice President Mike Pence’s visit to Ashraf-3, home to thousands of members of Iran’s principal opposition movement, the Mujahedin-e-Khalq (PMOI/MEK), and his meeting with Mrs. Maryam Rajavi, the President-elect of the National Council of Resistance of Iran (NCRI), on June 23, terrified the ruling theocracy. Though state-run news agencies and tightly controlled TV and newspapers performed a well-orchestrated chorus, they could not conceal the political jolt.

Besides rehashing a long list of the regime’s grievances resulting from the relentless four-decade-long campaign by the MEK and the NCRI to unseat the mullahs’ murderous reign, state officials and media attempted to exploit the occasion to tie the Iranian Resistance with the US, Israel, Saudi Arabia, the UAE, Bahrain, all at the same time.

Some officials went beyond the usual directives and spoke more explicitly about the MEK and its increasing influence, expressing their anxiety over the impact of the trip on society in general.

Ahmad Mahmoudi, the Supreme Leader’s representative in Isfahan told a local TV network the same day, “We have to explain things. Let our new generation know that the sworn enemies, the hypocrites (the regime’s pejorative term for the MEK), are traitors who committed crimes in this country at the behest of the US, Israel, and Britain.”

The next day, Hassan Ameli, the representative of the Supreme Leader in Ardabil, echoed the same concerns. It is very difficult for us that Mike Pence, Trump’s deputy, appeared among the hypocrites yesterday in Albania and insulted Iran. He had encouraged Trump to ditch the JCPOA,” he said.

Also on June 24, Prosecutor General Mohammad-Jafar Montazeri told state TV, “It is necessary to explain about the hypocrites to the young generation and teenagers who were not there at the time (referring to the 80s) or do not have enough information. Because today, unfortunately, this group is committing crimes under the banner of the global arrogance.”

On June 24, the state-run Mehr news agency quoted the governor of Shahreza in Isfahan Province, Amir Jafari, as saying: “The hypocrites have monopolized the cyberspace… The enemy is trying to show that the Islamic Republic is at a dead end and to lead the people to fear and despair.”

Calling on other state officials to take more severe action, he said: “We should provide facilitation for the families of the martyrs of the assassinations to express their experience, and here, we can cooperate with the Habilian Foundation. We are ready to cooperate to hold various ceremonies with the departments of the Judiciary, Education and the Martyr Foundation, Islamic Culture and Guidance, and other sectors.”

But the most vivid reaction came from a man who is usually in charge to denounce and trash international condemnation of the flagrant human rights violations in Iran.

Inadvertently admitting the MEK’s growing and expanding prowess inside Iran, the regime’s deputy for international affairs and human rights Kazem Gharibabadi explained on state TV on June 24: “Perhaps at some junctures, the belief was that the Hypocrite grouplet (MEK) has no support and everyone is aware of its terrorist nature and that there’s no need for us to refer to them any longer. But this is not our view. In the (Iranian year) 1400 (beginning March 20, 2021), a very good and joint campaign began, and heavy pressure was brought to bear on countries that were host to the Hypocrites.”

He went on to add, “There has been no meeting between us and European delegations where we skipped the issue of the hypocrites. At the Human Rights Council meeting in February, I devoted at least 2-3 minutes of my seven-minute speech to the terrorist group of the hypocrites, and the crimes they committed, and we warned the international organizations of the European countries to be aware of their responsibility and to not defend these terrorists.”

Referring to the cases of the regime’s terrorist diplomat Assadollah Assadi and former prison official Hamid Noury, imprisoned in Belgium and Sweden, respectively, he blamed the MEK for conspiring against both of them. “Sometimes we are under pressure from public opinion. So, if they (Belgium and Sweden) mistreat our prisoners, why shouldn’t we treat their prisoners similarly? Let’s put them in solitary confinement, forbid them from contacting their families and their lawyers, and deprive them of their medical and health rights.”

In recent months, as socio-economic crises are increasingly pushing more people into misery and absolute poverty, the network affiliated with the MEK inside Iran has been growing by the day. The Resistance Units continue to strike in cities and villages across the country, challenging and crippling vast and multifaceted security and intelligence network to encourage other Iranians to dissent.

So far, the regime has embarked on hundreds of demonization campaigns, including the publication of books, production of movies, and TV series, holding conferences, and churning out propaganda by dozens of official and semi-official organizations, to besmirch the MEK and scare off the young generation from joining their ranks. But in a country where ordinary people on the streets keep insulting and even assaulting clerics and their security forces, these efforts have had the opposite effect by drawing more interest to the MEK.

Perhaps that is the most terrifying development for the ruling clerics and this is why they are trying everything to delegitimize the organization.

Today, June 25, signaling the mullahs’ utter frustration over the failure of their anti-MEK campaigns, in remarks published by the state-run Mehr news agency, the Intelligence Minister Esmail Khatib openly threatened the MEK with terrorism: “In their great fight and jihad as judicial officers, certainly, the anonymous soldiers of Imam Mehdi (regime’s term to describe MOIS agents) will use all their efforts and support in carrying out the serious mission of maintaining the security of the borders and the rights of our nation. The Albanian-based terrorists have never been and will never be safe from the fire of revenge for the 12,000 martyrs of their crimes.”