Mother of executed teacher thanks Iranians and protestors for denouncing executions 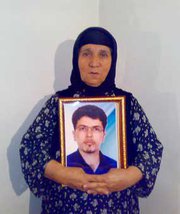 NCRI – The mother of Farzad Kamangar, a Kurdish teacher who was executed by the Iranian regime at the notorious Evin prison in Tehran on May 9 along with 4 other political prisoners, has sent a message to all organizations and individuals who attempted to save the life of her son and later condemned his cruel execution. In a part of the letter addressed to the freedom-loving people of Iran, Ms. Kamangar states:

On my behalf, please say hello to all organizations, groups and dignified and freedom-loving individuals, and all the beloved people across the world who tried to free him from prison, protested, wrote letters, signed letters, and later after the death of Farzad, expressed solidarity with us from near and afar. I know what people did and how hard they tried. Please convey my warm and endless greetings to all of them. I expect all these beloved individuals to continue the path of Farzad. I am now the mother of thousands of Farzads. I have said repeatedly that Farzad was not mine only, he was the son of all Iranians.

In the northwestern cities of Orumieh and Eshnavieh, students refused to attend classes in protest to the execution of the five political prisoners and the regime’s refusal to hand over their bodies. On Tuesday, May 18, 2010, more than 50 percent of the junior high and high school students in Orumieh did not attend classes. In Eshnavieh, more than 75 percent of schools, including Ferdows High School, the so-called Motahari High School and Haj Rasoolian High School were almost closed.

Students at Bu Ali Sina University located in the western city of Hamedan placed the pictures of the five executed political prisoners in front of the Sciences department, held a ceremony in their honor and lit up candles.

Political prisoners in Ward 350 of Evin prison also held a protest of their own in reaction to the execution of Farhad Vakili, who used to be incarcerated with them in that ward. On Monday and Tuesday, May 10 and 11, they launched a hunger strike and chanted “death to dictator” in the prison’s open area. Following this act of protest, prison guards transferred some of the political prisoners to Gohardasht and Pardis prisons in Karaj.

A number of female political prisoners in Evin also wrote a letter, honoring the memory of Shirin Alam-Houli, and expressing condolences to the families of the slain prisoners. In the letter, they stated, “Shirin was executed while the process of her interrogation and trial was illegal and coupled with frightening physical and psychological tortures.”