My Journey Through the Dark Corridors of Fear 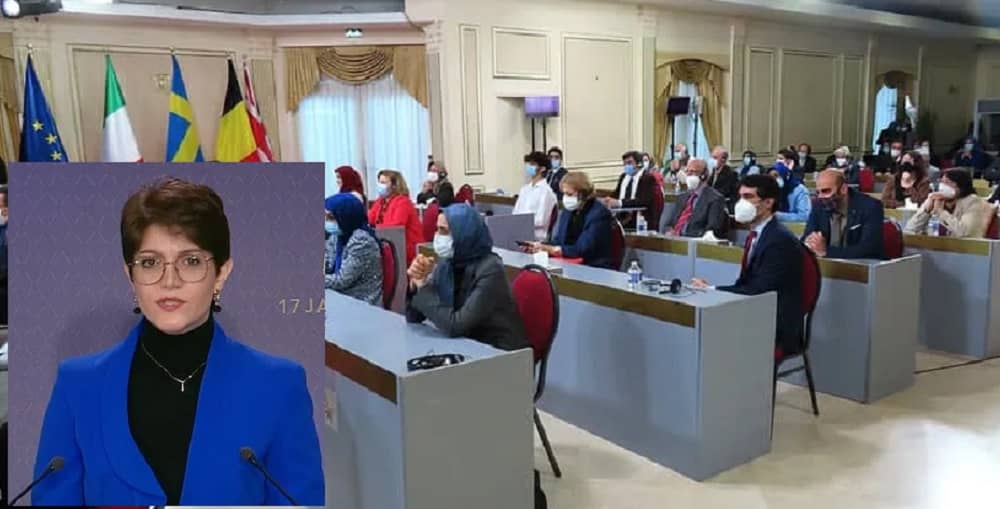 The following is the text of the remarks by Ms. Azadeh Alemi about her days in jail as a child:

Some 40 years ago, Ashraf Rajavi said: “The world has no idea of what our nation is going through.”

I want to take you all on a journey. I’d like you to tour with me, through the memories of my three years old, when I passed through the dark corridors of the damp, cold, and dreaded Evin prison, passing the dungeons, into the solitary confinement. Because for several weeks, I saw firsthand what Ashraf Rajavi was talking about.

At the age of three, I had barely developed a clear understanding of the world around me, when I found myself behind the iron bars of the prison. It is rather strange when one feels that everything shiny and nice is on the other side of the high walls. While both my parents were locked up first, I was brought up with my grandmother. She was the only expression that I replaced with my mother’s warmth and love. The day they came for my grandma, she started yelling at the guards and pleaded to them to take me with her.

She had just lost two of her loved sons, 21 and 25, both supporters for the Mujahedin. They also executed her bride, who was into her fifth month of pregnancy, killing two innocent souls at once.

My grandpa and my father were wandering in exile, while my mom was also languishing in prison, blindfolded and unaware of what is happening to her family.

The second time I get to see inside of the prison, I am a six-year-old child. I was arrested a few hours ago while accompanying my mom and now I am walking through a horrifying corridor, holding my mom’s hand as tight as I can. To my right, there are some men sitting on the ground with their heads bent on their knees, all blindfolded.

My mom is blindfolded too, and I’m the only one who can guide her through the never-ending hall. With a slow and heavy pace, we move forward, not knowing where we’re headed to. Not even for a second, am I taking my eyes off the two plainclothes guards who were walking in front of us.

We are now entering a room, narrow and long. To my panic, one of the guards shakes my mom’s hand loose and takes her away from me. He takes me to the bottom end of the room. I cry and I struggle but he’s so strong and so gruesome.

Someone is sitting at the table, but I keep my eyes locked on my mom, instinctively fearing that this might be the last second I’m with her. I don’t want to lose her again.

A horrifying barking comes out of the gruesome bearded man that is asking me: “Do you like Imam Khomeini? What about your dad? How about your mom? So why are you here then?”

I mutter something under my breath, but still, all my attention is devoted to my mom. She is at the table at the other end of the room. Oh God, why is she so quiet?

The interrogator standing next to her suddenly hits her several times on the head with the tip of his pen and yells: “The ink of signing your release paper from prison has not dried yet, you are back again?!!!!”

My heart breaks and I want to break free and run over to her. I want to protect my mom from this monster. But my mom… she remains calm and looks up to the man. She speaks no words, and her silence speaks volumes to me.

After four long years of suffering, it was only a month ago that she had been released, and now she is back standing before the interrogator again.

This time we are in another corridor, and I am still holding her hand tightly. With a gaze that sometimes slips on her blindfold and sometimes on the path ahead of us.

The guard who was accompanying us unlocks a door. It’s a small room. Very tiny. Void of anything but concrete walls. I am alone with my mom and yet after all those years, it continues to strike me when I remember those moments… that I felt safety in isolation when none of the gruesome bearded monsters were around.

In that cell, there is a glim of light from a small window above. In the corner, two thin folded blankets are abandoned on the floor. My mom spreads one of them. She has already got rid of her blindfold. Back to the wall, we cuddle each other. No one is with us anymore. We are alone. We have some safe moments together. I am not leaving her for a second. I clung to my mom since I am petrified of everything, be it visible or unseen.

I am gradually falling asleep. It is dark everywhere, there is no light in the window anymore. Someone pulls me out of my mom’s arms. Someone tries to take her away. “You have to come, it’s time for interrogation” and drowned in my tears again, I hide in horror and loneliness.

Days are numbered and nights of warm embraces pass on those stinking blankets and prospects of being separated again in the darkness of the night and sinking into loneliness goes on, a never-ending cycle.

My mother says it was only two weeks that I spent those nights with her. But in me and all the other children, those blood-soaked days, those endless nights, the corridors, the blindfolded eyes, those heads bent on knees, and the memory of those moments of hugging continue to live with me.

In those days, my eyes were the only ones that did not wear blindfolds. I saw everything. Even though I was too young to be legally reliable for testimony, my memories are not. I knew what I was witnessing, and I know how those young men and women spent their last nights and days in this world.

40 years have elapsed, but the world has still no idea of what our nation has gone through. It is our duty to be the narrator of the sufferings that have befallen our country, all the martyrs, the great enchained people who did not succumb in the corridor of death and stood tall before the gallows and did not allow the henchmen to pull the stool from under their feet. They bravely endured the pain and withstood the terror, so that we can live in peace and freedom.