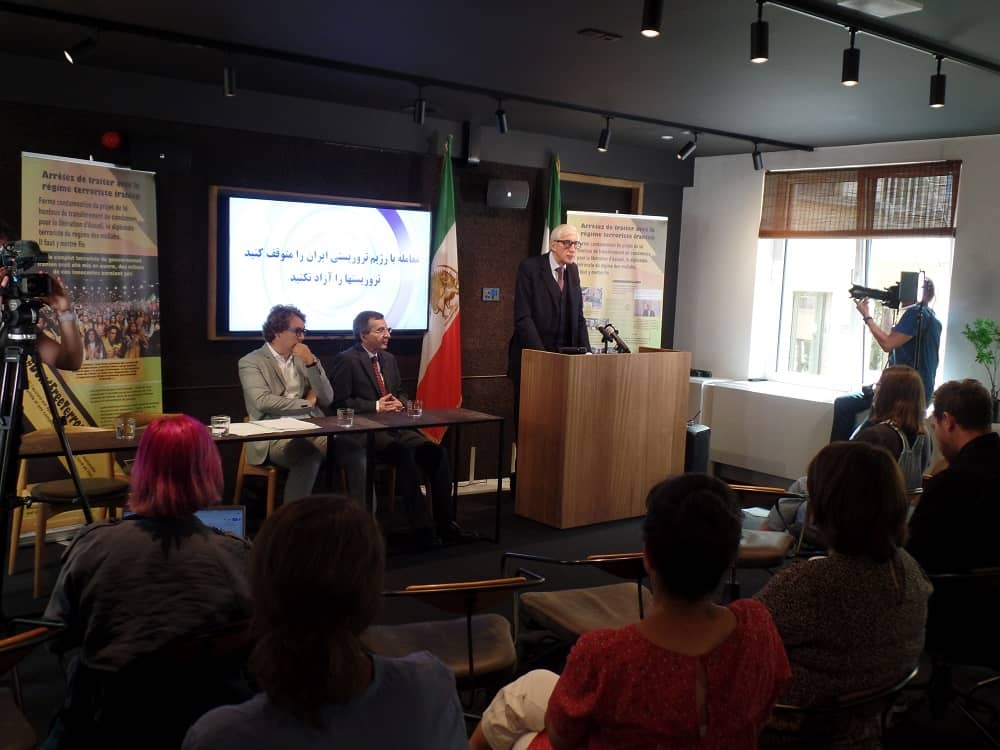 On July 5, the National Council of Resistance of Iran (NCRI) held a press conference in the Belgian Capital, Brussels, and announced its official statement about a new controversial Belgian parliamentary bill. The bill is supposed to confirm the government’s treaty with the Iranian regime to release convicted state terrorists and send them back to Tehran.

Mr. Farzin Hashemi, a member of the NCRI Foreign Affairs Committee, said: “Let there be no illusions here. Cloaked with the benign intention of justice and humanity, this treaty has only one objective. That is facilitating the release of the notorious terror master, Assadollah Assadi. Tens of thousands of people and hundreds of dignitaries from the US and Europe were in attendance at the meeting in support of the National Council of Resistance of Iran on June 30, 2018. If the plan to bomb the gathering had been successful, it would have been the biggest terrorist incident in Europe. The investigation established in no uncertain terms that this was a state work, decided at the highest levels of the regime. According to the documents in the investigation, Assadi consistently told his terrorist agents that the bomb should be placed as close as possible to Mrs. Maryam Rajavi, the President-elect of the National Council of Resistance of Iran who was the primary target of the plot.”

“It is very telling that one of the key issues of discussion between Ms. Sophie Wilmes, the former Belgian Foreign Minister, and her Iranian counterpart on the sidelines of the Munich Security Conference on Feb 19 was the case of Assadi. The Belgian Prime Minister in a phone conversation with Iranian regime President Ebrahim Raisi on May 11 expressed hope for strengthening and expanding relations between the two countries.”

“There is no humanitarian issue here. We are not only dealing with a dirty deal but also a dirty trick of packaging this deal with treaties with India and the UAE. And the urgency for this “treaty” with the Iranian regime is a mystery, all the while treaties with the other countries have been signed several years ago.  Although they talk about a similar “treaty” with the Iranian regime, even the wording of this agreement is different than the ones with the other countries, providing more concessions to the Iranian regime, enabling it to give clemency to convicted prisoners. This treaty is tailor-made for Assadi. Period.”

“This “treaty” only gives a green light to the regime in Tehran to continue to take foreign nationals or dual citizens hostage to be used later as bargaining chips. It compromises the safety and security of Europeans and rolls the red carpet for the Iranian regime and its terror apparatus in Europe. This will set a dangerous precedent for other European countries, who could follow the Belgian example and sign similar deals to get their hostages out of Iran.” 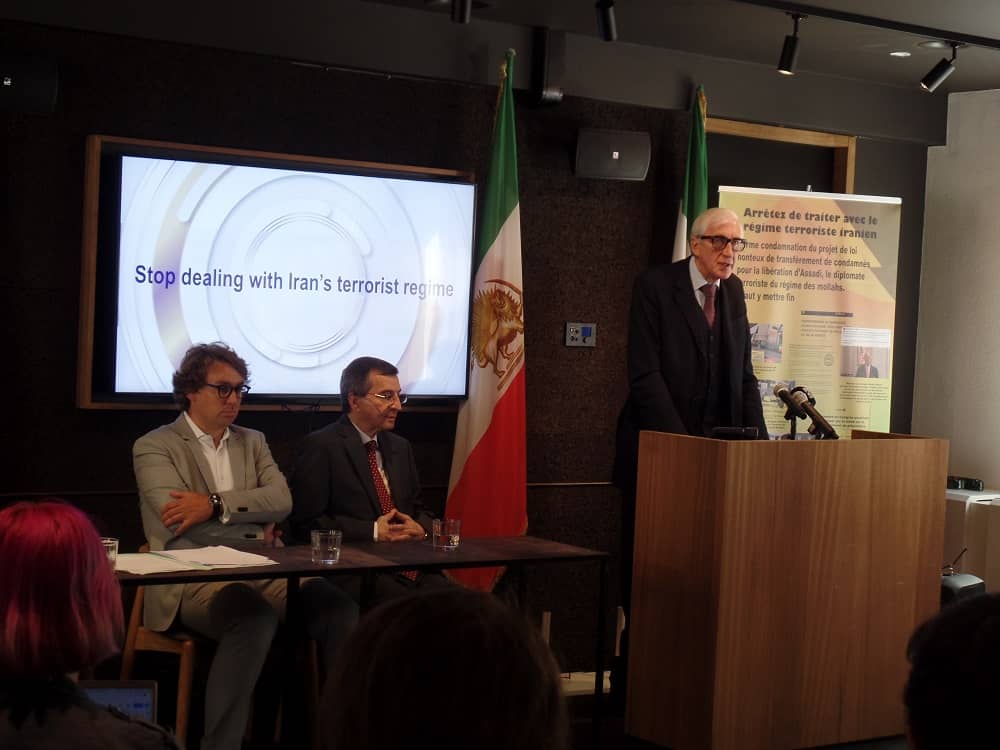 “This treaty makes a mockery of Belgian’s Judiciary and disparages the great and meticulous work done by this country’s security services. It is imperative that the Belgium parliament reject this agreement. Let me be clear: If this legislation is approved, no one in Europe will have security and immunity from the murderers ruling Iran. Making a deal over their lives and hundreds and thousands of others at risk in the gathering is an indelible stain. The Belgian parliament must stop this travesty.”

NCRI lawyer in the Assadi case in the Antwerp Court Rik Vanreusel told reporters: “During the last four years, we had a legal fight, not only against the defense team of four terrorists but also against the constant threats from the Iranian regime. Right before the first session of the Antwerp Court in 2021, the Iranian regime had threatened to kill Mr. Jalali and the Belgian Justice system, and the Belgian investigators have never surrendered to the Iranian threats. It is very disappointing today that our country is going to give in after all via some behind the scene treaty.”

“This treaty is absolutely going to release Assadollah Assadi and enables him to go back to his country and based on Article 13 of the Treaty he will also be able to enjoy clemency. I believe that as soon as he reaches Tehran, his amnesty will be signed. The man who has terrorized entire Europe under the cover of diplomatic immunity, not only with this bomb attack in Villepinte that we eventually managed to thwart but also through a network of spies that he runs through his embassy in Vienna.”

“This treaty is not providing the slightest guarantee to our country that this man and this terrorist state is not going to stand at Europe’s door tomorrow. Are we going to be able to thwart the next bomb attack? Aren’t we absolutely legitimizing the hostage-taking policy that has been conducted by Iran throughout these years? Aren’t we giving in too much to terrorism?”

“We dodged the first bomb attack but what are we going to say the next time when there are victims at the behest of this regime? And there are a lot of them already. The clients that I represent in this case, have lost 30,000 fellow members since the ‘80s. They have been killed by this regime. Every year, Iran is committing more murder on Western soil and they don’t make the news.”

“With this treaty, we’re going to perpetuate a solid policy toward Iran where innocent citizens become hostages, and then we have to wait until we can exchange them either with money or secret agents and convicted terrorists and then set them free to the Tehran’s spy network.”

“I see this as a very important development, also when we see this in a broader context that Iran is absolutely not holding itself at non-proliferation contracts and that Iran is advancing with its uranium enrichment and we are more distant than ever from peace in this region. On geopolitical grounds, this treaty is an absolute step backward, a step in the wrong direction.”

NCRI lawyer Georges Henri Beauthier added: “These people were convicted and belonged to a terrorist organization. The world knows that there would have been tens of thousands of dead from the explosion that they planned. They wanted to kill many people. And now, in a few weeks, they will be released.”

“A letter from February 2, 2021, insured that there would be no discussions with the Iranian government about the terrorists. And now, one year later, they are preparing to free them. What will the federal prosecutor say, who spent four years to gather evidence to show these were indeed terrorists?”

Previous articleBelgium Is a Litmus Test in the West’s Stand Against Iran’s Terrorism
Next articleMrs. Rajavi Expresses Gratitude to Iranians, Parliamentarians, Lawyers, and Political Figures- Underscores Global Campaign Will Continue