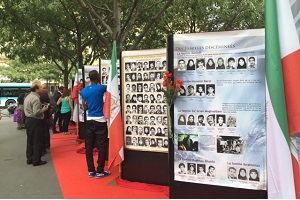 NCRI – Iranians living in France on Saturday rallied in central Paris to denounce the upsurge in the rate of executions in Iran under the presidency of Hassan Rouhani and call on European governments to make human rights the focus of their Iran policy. The gathering coincided with the 27th anniversary of the 1988 massacre of Iran’s political prisoners.

Iranian and French supporters of the National Council of Resistance of Iran (NCRI) organized a human rights display in Châtelet, in the heart of Paris, exposing the 1988 massacre of 30,000 political prisoners in Iran.

In the summer of 1988, one month after Ruhollah Khomeini was forced to accept a cease-fire in his eight-year war with Iraq, the fundamentalist ruler of the mullahs’ regime ordered a mass execution of all political prisoners affiliated with the main opposition group People’s Mojahedin Organization of Iran, PMOI (Mujahedin-e Khalq, MEK).

Following the July 14 Iran nuclear deal, some European officials have travelled to Tehran in the hope of re-establishing economic ties with the mullahs’ regime.
These officials are failing to pay attention to the dramatic deterioration in the human rights situation and the rapid rise in the rate of executions in Iran, the protesters said.

Watch a short clip from today’s protest in central Paris:

At least 44 prisoners, including two women, have been executed in Iran, in some cases in public squares, in the past 11 days.
The protesters in Paris called on European governments to condition an improvement of relations with Tehran on an end to the killing spree and Tehran’s export of terror and fundamentalism.

The protesters also called on the United Nations and the U.S. government to live up to their obligations to protect several thousand members of the PMOI (MEK), facing an inhumane siege at Camp Liberty in Iraq.

Human rights in Iran the focus of Paris’ Trocadero Square