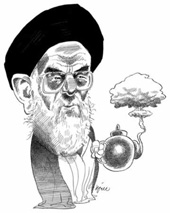 A month has elapsed since the election of the mullahs’ new president and in a few days he will have his inauguration.

Appointment of Ahmadinejad as the new president was a strategic choice for the supreme leader, Ali Khamenei, to increase repression in the country and be of a more outlaw state on the international arena. Any other perception will be a grave mistake.

A month has elapsed since the election of the mullahs’ new president and in a few days he will have his inauguration.

Appointment of Ahmadinejad as the new president was a strategic choice for the supreme leader, Ali Khamenei, to increase repression in the country and be of a more outlaw state on the international arena. Any other perception will be a grave mistake.

16-years of depicting as moderates the clerical regime has now reached a point that it can no longer tolerate slightest diversity at its top level as it would lead to its total disintegration. This is primarily due to its medieval nature, internal isolation and regional as well as international crises. To this end Khamenei had no other choice but to centralize the whole power in his own hand.
At the heart of this strategy lies the Revolutionary Guards Corps which should dominate all pillars of power as the main instrument at the disposal of the supreme leader.

Suppression inside the country and export of terrorism and fundamentalism, particularly to Iraq, and acquiring nuclear weapon are inevitable priorities for the mullahs’ regime at this juncture. These three elements are the main tasks of the Guards Corps which is under complete control of the supreme leader.

In this light, Khamenei “made crucial changes in this organ” following a meeting with “high ranking commanders of the Guards Corps.” One of the most important of all was "the formation of a central establishment to formulate tactical and strategic policies for the Guards Corps." (Baztab, the internet site of the former Revolutionary Guards Commander, July 23, 2005)

The suppressive role of the Guards Corps is an established fact for everyone.
Appointment of the Revolutionary Guard Ismaeil Ahmadi Moghaddam, the commander of Tehran’s Bassij para-military force, as the commander of the State Security Force, just a few days after the presidential elections, was a clear indication that SSF is going to go under the domination of the GC more than ever before.

Some also say that Ahmadinejad intends to appoint members of the GC to key position within the Intelligence Ministry.

As it has been exposed on many occasions by the Iranian Resistance, the nuclear weapons program is under full control of the GC from the beginning. An Iranian nuclear scientist recently disclosed that in 1998, the former commander of the GC, Mohsen Rezaei, asked  him to give highest priority to production of nuclear bomb. As a first step $800 million was allocated to this project.

By appointing a Revolutionary Guard as the president, the mullahs’ supreme leader has removed all bureaucratic obstacles on the way to manufacture nuclear bombs using all logistical, diplomatic and financial means to facilitate the task.

This is while the head of the clerics’ nuclear negotiating team with European, Hassan Rowhani, said a few days ago: "In the 21 months of negotiations with the European countries we made great achievements in technical, legal, political, propaganda and national security areas. We have resolved many of our shortcomings. We did not suspend the work on Isfahan site for even one moment. We managed to get it working technically and produced many tones of UF6. Work on Arak site was never suspended and today there are a considerable number of operational centrifuges.” He added that the fuel cycle has been of utmost importance to the regime and there is consensus among the leaders of the regime and the experts over this matter.

Hossein Mousavian, secretary of the Foreign Policy Committee of the Supreme Council for National Security said a few days earlier that during the negotiation process, "not only we managed to sustain our nuclear capabilities and protect it from any possible threat such as a military attack, but also provided an opportunity for Iran to continue with efforts to complete its capabilities. During this period, for example, UCF in Isfahan was completed and production started." He also added that if there was no negotiations, “signing big international contracts on gas and oil exports would not have been possible in the past two years. The negotiations provided an opportunity for Iran to sign long term gas export contracts with India, China, Pakistan and United Arab of Emirates."

The worst scenario is the sinister ambition of the Iranian regime’s domination over Iraq and the establishment of a proxy Islamic regime in that country.
In the past two years, the GC and in particular the Oods Force have expanded their infiltration into Iraq, specially in the southern provinces. There are horrendous reports of carrying out brutal sentences against women and youth in southern Iraq under the cloak of Islam.

The mullahs’ infiltration in various administrative, economic, military and security  organs of Iraq and the presence of tens of thousands of GC members and its agents in Iraq, terrorist operations and bloody purging carried out by the mullahs to consolidate their positions in Iraq, have put peace and tranquility in the region in jeopardy.

The most important aspect of Ahmadinejad’s rise to power is to utilize country’s administrative, economic and industrial potentials to attain regime’s ominous goals in Iraq.

In line with the notion of expanding terrorism and fundamentalism to the region and in particular Iraq, a newspaper affiliated to the regime’s supreme leader published an advert by “the Garrison of Lovers of Martyrdom” (Garragah Ashegan Shahadat) calling for "registration of suicidal forces". It quoted Khamenei as saying "suicide operation is the ultimate glory of a nation and is the highest epic".

The call also reiterated that "in an all-out preparedness against enemies of Islam and the sacred state of the Islamic republic, and also in protection of the foundations of Islam, the garrison intends to give special and technical training to martyrdom-loving and courageous people to form suicide divisions in every province”.

This would have catastrophic consequences if all such calls from Tehran are considered as political maneuvers. This is a campaign to extend terrorism in the region and the world. It aims to challenge democracy in Iraq and peace in the Middle East.

Appointment of Ahmadinejad as the president, GC’s increasing powers, the regime’s insistence on its continuation of nuclear project and formation of suicide operation divisions, have set off warning alarms.

In December 2004, the President-elect of the National Council of Resistance of Iran, Mrs. Mayram Rajavi, said in the European Parliament: “On the issue of Iran, the world shouldn’t opt between war and appeasement. There is a third option, change through people and the Iranian Resistance”.

She added: “If the policy of appeasement goes on, a war will be inevitable. We are closer to the catastrophe compared to seven months ago. This necessitates a more vigorous and robust policy more than before.”

One should not forget that we are facing a regime that is more vulnerable and feeble than ever before and its support among its loyal forces has been trimmed down tremendously due to the major power shift within the regime which took place in the course of the recent presidential election.

Iran is at the centre of developments in the region. We are racing against time. If the European countries miss the present opportunity to abandon the policy of rapprochement, they will give the mullahs the time they needed to push forward their plans.

But on the other hand, should they recognize the rights of the Iranian people to resistance against the inhuman regime of the mullahs, including removal of the terror label against the PMOI, the backbone of the Iranian Resistance, the change in Iran – the essential requirement for peace and democracy in the region – is within reach.