Roadside bombs manufactured in Tehran for shipment to Iraq – IPC 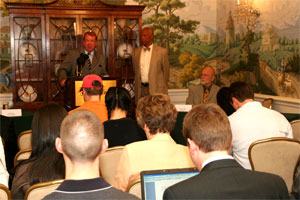 NCRI – During a visit to the White House by Iraqi Prime Minister Maliki, the Iran Policy Committee (IPC) held a press conference on July 25 to discuss the Iranian regime’s brazen efforts to pressure the Iraqi government to do Tehran’s bidding, while fueling the insurgency and exacerbating sectarian violence in Iraq.

The IPC revealed newly-acquired intelligence identifying the exact location of a roadside bomb factory in Tehran, which manufactures improvised explosive devices (IEDs) for shipment to Iraq.

Georgetown professor and former senior member of the National Security Council staff Raymond Tanter stated: “The Ordnance Factories Complex is located in the Lavizan neighborhood in northern Tehran and consists of three separate and independent industrial sections called Sattari, Sayad Shirazi, and Shiroodi, each with its own products. Sattari Industry specializes in anti-tank mines and bombs. The industry works on turning mines and bombs into improvised explosive devices.” 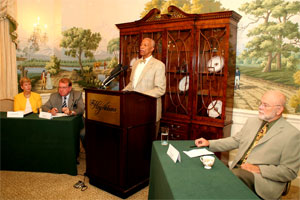 Professor Tanter also said: “Intelligence reports received from reliable sources inside Iran indicate that powerful explosively formed projectiles (EFPs), or shaped charges, used against the Multi-National Force in Iraq are built under a confidential order by the Qods (Jerusalem) Force in Iran. Explosively formed projectiles are advanced improvised explosive devices that are harder to detect, can penetrate thicker armor, and are more lethal than traditional IEDs. The Islamic Revolutionary Guards Corps Qods Force places its orders with the Ordnance Factories Complex.”

As a guest from Europe, Struan Stevenson, Scottish member of the European Parliament spoke about the threats posed by the clerical regime and said, “We know well that Iran funds the insurgency in Iraq. Tehran fans the flames of potential civil war in Iraq.” Stevenson added that, “Maliki must not bend the kneel down to any pressure from Tehran,” referring to Maliki’s statement calling for the expulsion of Iran’s main opposition, the People’s Mojahedin Organization of Iran and cutting off fuel supplies to its hospital in Ashraf City in Iraq.

“We should be telling Prime Minister Maliki that the democratically-elected government in Iraq is something that we in the West support, and that he must not allow the mullahs to divert him from the path of democracy,” said Stevenson adding, “Prime Minister Maliki should listen to those who say that the Iranian opposition must be protected.”