Statement by Chairman of the legal committee of Syrian National Coalition

President-elect of the Iranian Resistance

In this meeting, Mrs. Maryam Rajavi hailed the heroism of the Syrian people, especially residents of the devastated city of Aleppo, and said that while global powers have either stood on the side of the murderer or remained passive, the steadfastness of the Syrian people in the past six years promises the certain victory of the Syrian people and the Syrian revolution. The Assad regime and its main supporter, the religious fascism ruling Iran, would not be able to escape from this defeat.

Mrs. Rajavi added that the Iranian people and their resistance and the Syrian Revolution are waging a historic battle against a common enemy, the criminal mullahs ruling Iran, who have with their crimes immersed the whole region in a sea of blood and crisis. But today the Syrian people and revolution have made the country a quagmire for the Iranian regime that doesn’t have any way out. The regime officials acknowledge in their internal meetings that they don’t have the ability to keep Bashar Assad in power. However by continuing their massacre of the Syrian people they want to postpone as long as they can the disaster that the Iranian regime awaits. But with every passing day, they are forced to pay more for such a policy and plan.

Haitham al-Maleh, the most renowned lawyer in Syria and Chairman of the legal committee of the National Coalition, thanked the Iranian resistance and President Maryam Rajavi for standing with the Syrian people and revolution and said: “My relationship with the Iranian opposition goes back fifty years.” Mr. Maleh said that the mullahs have deployed to the scene 80,000 forces from different countries, including Lebanese Hezbollah, Pakistani, Iraqi, and Afghan militias and the Houthis in addition to Iranian nationals. He also spoke about the financial support that the clerical regime provides to Bashar Assad to prevent his overthrow adding that despite this, they cannot prevent the overthrow of Bashar al-Assad and the victory of the revolution.

Ms. Suheir Attassi, member of the High Negotiations Committee, emphasized on the solidarity between the two peoples and two resistances and said from our point of view and the Syrian people’s point of view, it is Mrs. Maryam Rajavi and her movement who represent the Iranian people, not the mullahs’ regime which spares no effort to massacre our nation’s children. Ms. Suheir Attassi presented a report on the criminal siege of a number of cities and villages in Syria and called upon the Iranian people and Iranian mothers to not let the mullahs’ regime dispatch their children to the war fronts in Syria – a war that without the slightest doubt Khamenei and Bashar Assad will lose.

Mr. Michel Kilo, a prominent Syrian opposition figure for several decades and a Political Committee member of the National Coalition, emphasized the Iranian regime has now brought some 80,000 of its Revolutionary Guards forces and other mercenaries to the war against the Syrian nation. This is in addition to the financial, economic, military and political aid that the clerical regime provides with the aim of keeping Bashar al-Assad in power. However, the Iranian regime is very fragile, weak and vulnerable and it knows that if it retreats from Syria, it will be faced with major crises inside the country.

Members of the Syrian delegation emphasized that the mullahs’ regime has meddled in Syria from the onset and has provided military, security, financial and personnel assistance to the Syrian regime and directly participated in the destruction, devastation and demographic change of population, all of which were done at the Iranian people’s expense and against their interests. Instead of focusing on Iran’s internal problems and improving people’s lives, the regime has waged external wars and has attempted to justify this with baseless religious veneer.

Members of the delegation sent a message to the Iranian people and their noble representatives who stand with the aspirations of the Syrian people and who share in their sufferings. Members of the delegation praised the Iranian Resistance’s initiative to allocate this year’s Ramadan iftar event to the Syrian cause which brings to focus the crimes against humanity that have continued for five years in all regions of Syria in the form of killings, destruction, blockades and forced starvation.

During the iftar program on Saturday, June 11 at the headquarters of the National Council of Resistance of Iran held with the presence of Syrian personalities and activists, hundreds of political personalities and religious and political activists from various Arab and Islamic countries and France took part.

Chairman of the legal committee 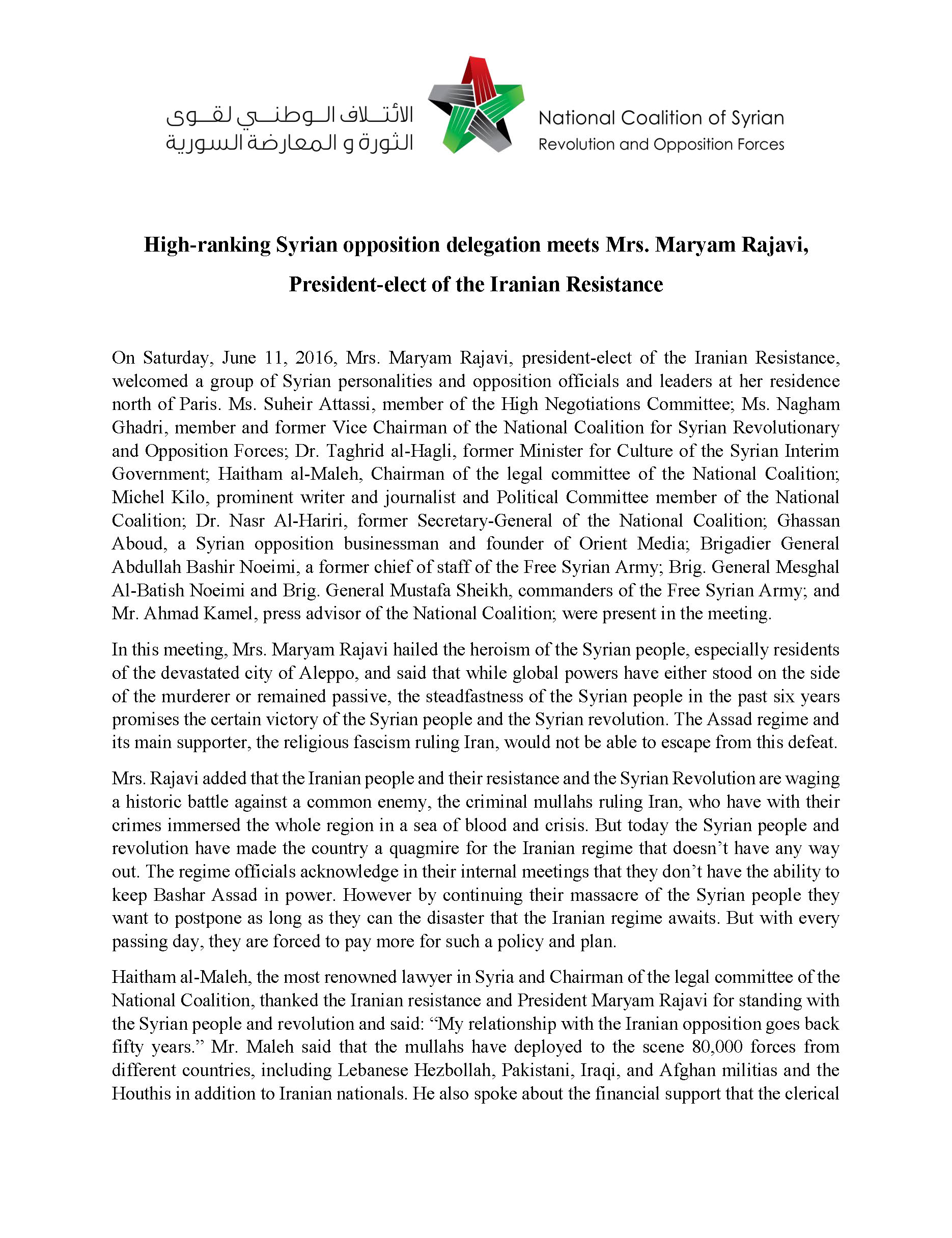 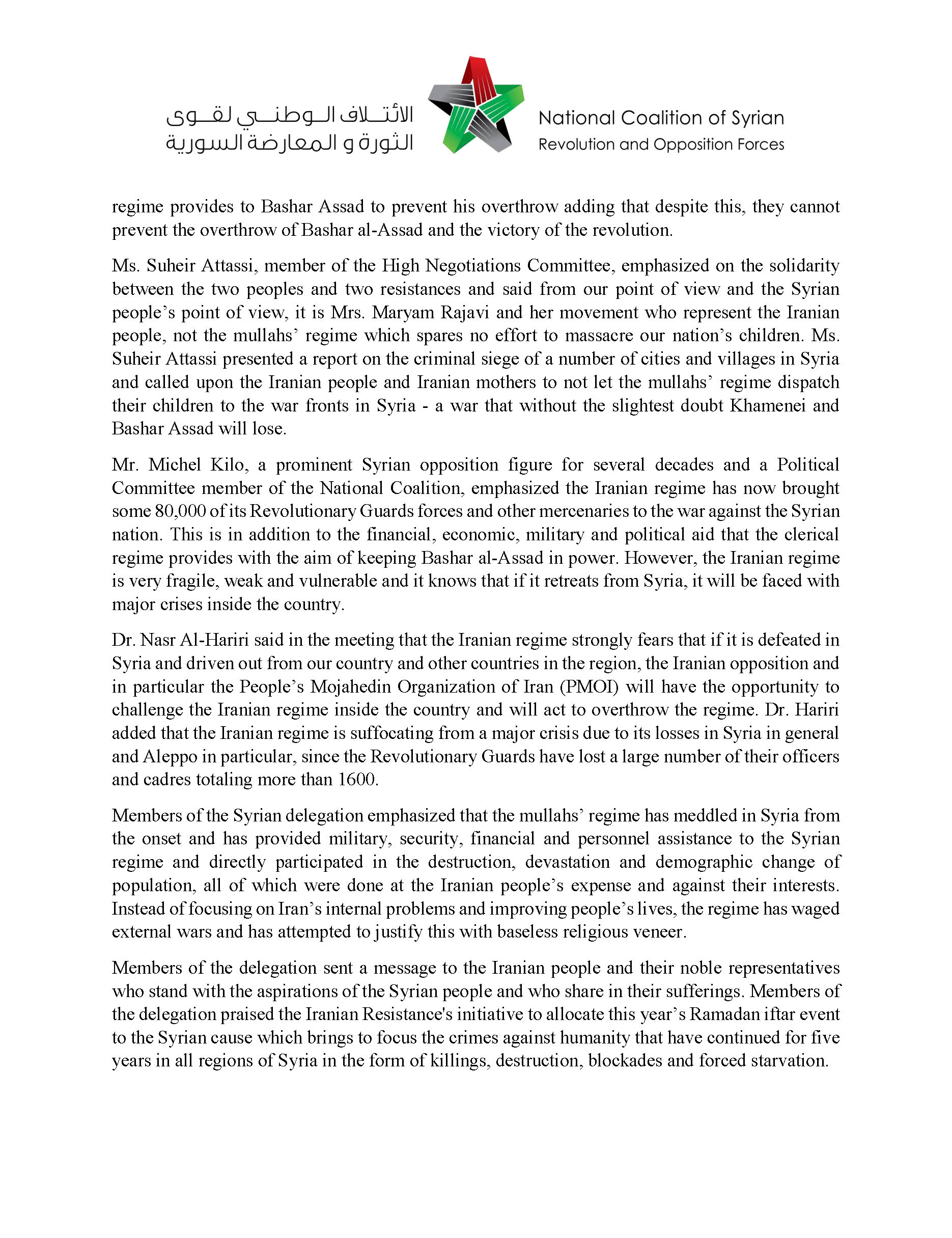 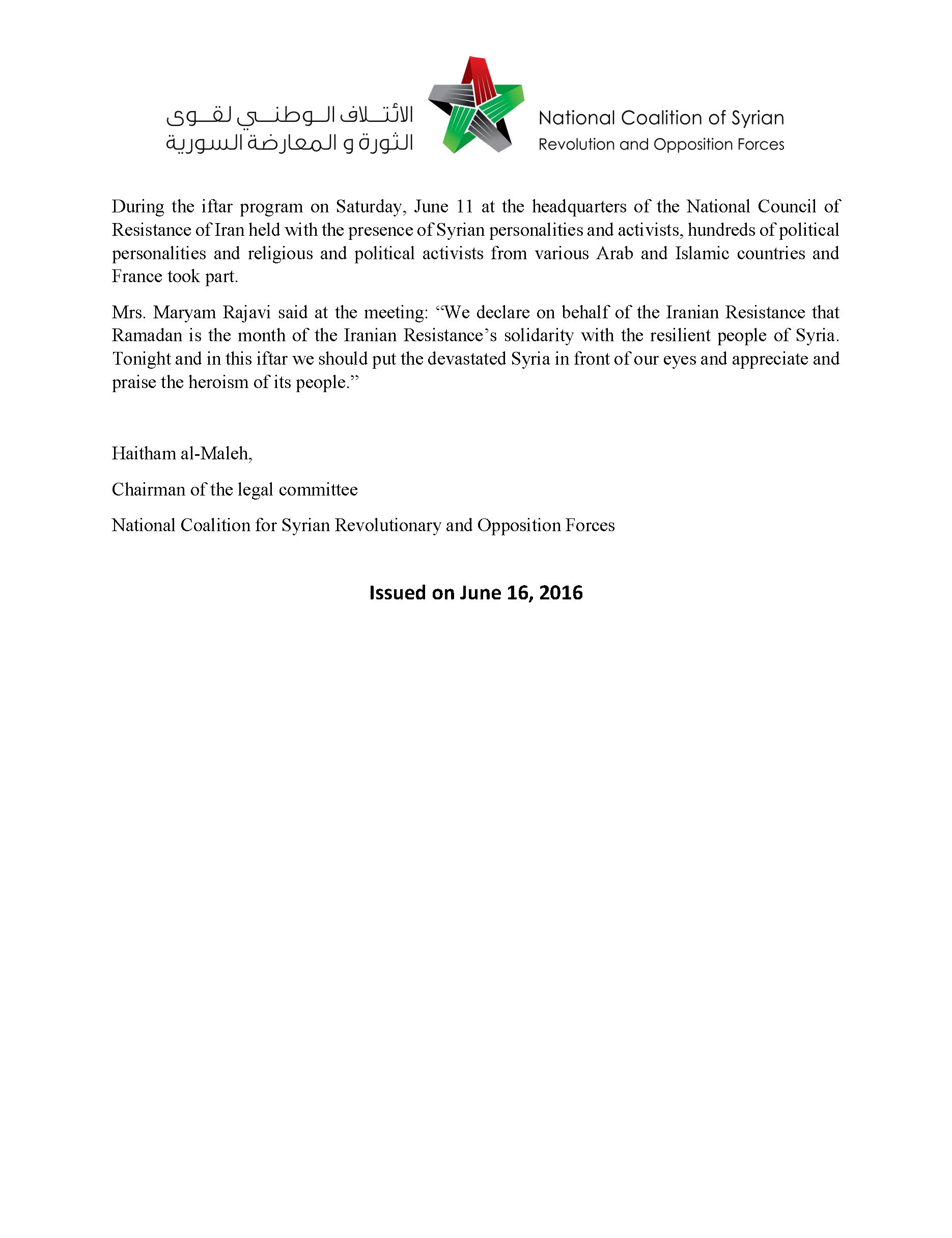