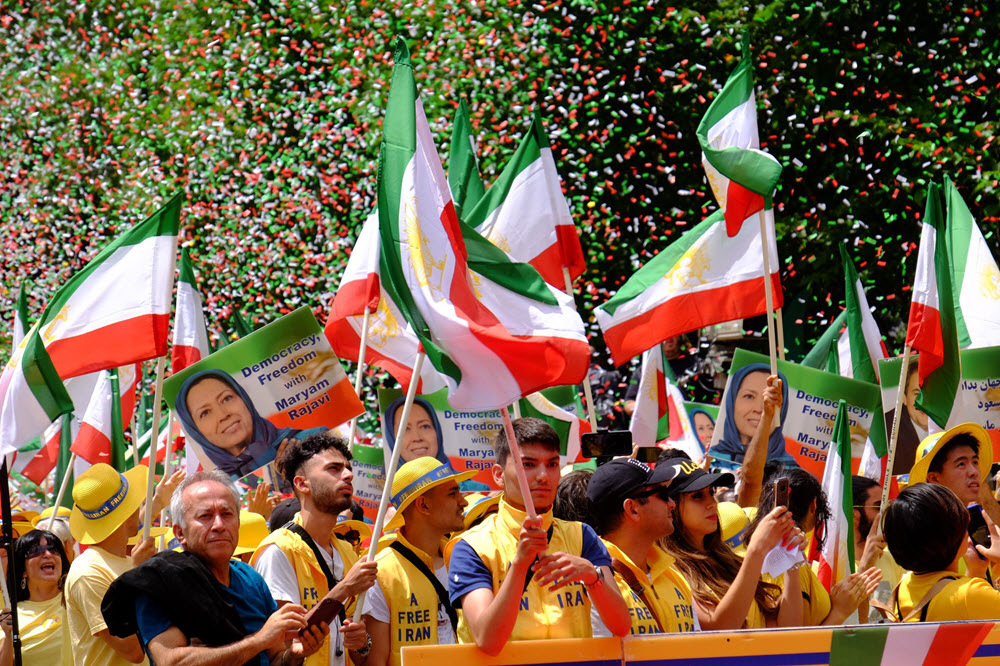 The Washington Times has published a several page special report about the June 21, 2019 ‘Free Iran’ march at the State Department and the White House in Washington DC. The special report includes highlights of speeches and messages of support from United States lawmakers and former officials from both sides of the aisle.

Several thousand supporters of the main democratic Iranian opposition People’s Mojahedin Organization of Iran (PMOI), also known as the Mujahedin-e Khalq (MEK), rallied in support of regime change by the Iranian people. They called on the international community to impose sanctions on the mullahs’ regime and to recognize the right of Iranian people to overthrow their dictators.

From The Washington Times:

Members of Congress, supporters call for freedom for Iran at D.C. rally

This regime may be on its last legs. It is acting with desperation — desperate to distract people from its own corruption.

I want to also take this opportunity to commend Madame Rajavi for her advocacy for democracy, women’s rights, and minority rights in Iran. Democracy and equality are not just principles we hold dear, they are rights that belong to people and we uphold these ideals — we uphold them around the world and across Iran. I am the chief Democratic sponsor of House Res. 374, a resolution supporting the people of Iran, free expression, and condemning the Iranian regime for its deprivation for human rights.

The entire free world is witness to your struggle and history foretells your impending triumph with these words, sic semper tyrannis — thus always with tyrants. What Churchill once said of Poland can today be said of Persia, that her soul is indestructible and that she will rise again like a rock, which may for a while be submerged by a tidal wave, but which remains a rock.

Your fortitude and courage are inspiring the admiration and support of people around the world. And even through the difficulty and danger of the present, you are already writing the next chapter of human civilization. Just when events seem darkest, the people of Iran pushed these dictators off of their pedestals and restored their nation as a beacon of freedom and justice, enlightenment and learning, tolerance and prosperity, as it was in the days of old and as it will be again in the bright days ahead.

There has never been a time when an American president has been so committed to fundamental change in Iran. Despite the current crisis, the very best path Iran has been on in the 39 years is right before us.

So, keep up your fight. Keep up your resistance. Keep up your hope. Keep up your courage. Your voices for freedom are heard. The American people and America stands behind you and the Iranian people, stronger than ever before. We will be there with you until you get your homeland and your freedom back.

Take risks. This community, the MEK, takes risks. Being targeted in Europe and America. Taking risk on behalf of people, of freedom, of democracy. Taking on the regime. What you represent is the future. And you have international support. You’re on the right side of history.

The reality is the mullahs will never change; they will develop nuclear weapons, they will spread terror, they will never let the Iranian people go. We need regime change and we need it now.

Thank you for your commitment to support the Iranian people. Your continued perseverance and support of a democratically free Iran is an inspiration to the world.

I stand shoulder to shoulder with you in support of a better future for Iran.

Sen. Cornyn serves on the Senate Committees on the Judiciary, Finance and Intelligence.

Thank you for continuing to highlight the plight of Iranians who remain silent under an oppressive, brutal regime. I share your vision for a better future for Iran and all Iranians. A future in which all Iranians live without fear and enjoy a government that represents the will of its citizens, respects human rights, abides by the rule of law and lives in peace and cooperation with its neighbors

As someone who has spent much of my tenure in Congress finding ways to effectively counter Iranian aggression I will always support justice and human rights, peace and security and above all else, the rights of all Iranians to fundamental freedoms.

I want to thank you for your courage. I want to say, stand tall. I support #FreeIran, and I support the fight that you are now waging to ensure that the people of Iran are free. I am delighted to know that you are standing with my sister Maryam (Rajavi), the President of this great organization who clearly appreciates the need for religious tolerance, separation of Mosque and State, gender equality and, of course, support for the Universal Declaration of Human Rights and freedom for all Iranians.

The current regime is not a friend to the United States and its allies. It suppresses the freedoms of Iranians, sponsors terrorism throughout the Middle East and imprisons political opponents. I full-heartedly support Free Iran’s efforts to peacefully transform Iran into a more just nation that respects the rights of all Iranians. May there one day be free and fair democratic elections in Iran.

I look forward to a time where we have a regime in Iran that no longer sponsors terror, which no longer oppresses its own citizens and takes away their civil rights.

We look forward to the opportunity at some point in the future to make your dreams, your hope for peace more of a reality. When you have leaders who are not all about themselves but are about the people of whom they lead. God bless you.

As everyday Iranians have expressed outrage over their government’s misplaced priorities, the U.S. should recognize the inherent right of these everyday Iranians and their noble quest for a better future and free, peaceful nation. We have been down this road before. Millions of Iranians are desperate right now to turn the tide in Tehran and all throughout Iran.

I strongly support the peaceful protest taking place today in Washington, D.C., against the current regime in Iran. For too long, Iranian citizens have been oppressed by a radical and corrupt government that has prioritized the proliferation of violence and terrorism over the well-being of its own people.