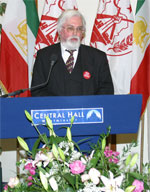 NCRI – Malcolm Fowler, Joint Chair of the British Law Society’s International Human Rights Committee called on the West to “adopt a firm policy towards the Iranian regime over its human rights abuses, support for terrorism, interference in Iraq and pursuit of nuclear weapons.” He also stressed that the West must support and engage in dialogue with the Iranian Resistance, which represents a tolerant, progressive and democratic Islam. He was speaking to a "Conference of Jurists & Parliamentarians on Legal Status of Ashraf Residents" in London on December 15, 2006. The text of his remarks is as follows:

We are all in agreement that the Iranian regime’s brand of fundamentalism, when mixed with its support for terrorism and pursuit of nuclear weapons represents a real threat to international peace and security.

The Iranian regime has been responsible for committing more than 450 terrorist operations stretching across continents. This has included the assassinations of officials of the Iranian Resistance in Geneva, Rome, Istanbul and many other cities. Only a couple of months ago, the Italian Courts convicted in his absence an Iranian official for the murder of the NCRI Representative in Rome. An Argentinean Judge also issued arrest warrants for seven top Iranian officials, including the former President, Rafsanjani, for the terrorist attack on a Jewish community centre in 1994, which left 80 dead and more than 150 injured.

The newest setting for the regime’s terrorism is Iraq. As we have heard, the regime is responsible for a substantial proportion of the terrorist attacks that take place in Iraq. Last month, the US Ambassador to Iraq said: "There is another challenge facing Iraqis…the Iranian and Syrian regimes are supporting groups who are killing Iraqis. Their objective is to use Iraqis as cannon fodder in their plan to keep Iraqis divided and Iraq weak”.

In respect of its nuclear program, the Iranian regime has made clear that it will pursue its ambitions no matter what the consequences. It has defied the IAEA and has failed to comply with UN Security Council resolution 1696 calling on it to halt its uranium enrichment. Of course, we must remember that it was the NCRI and PMOI, who in August 2002 were the first to reveal the secret uranium enrichment site of the regime in Natanz and the heavy water plant at Arak. Since then, they have been the primary source of information of the regime’s nuclear programmes. The mullahs have used the policy of appeasement adopted by the EU to buy time to advance their nuclear programmes.

As has been said by other speakers, export of revolution and creation of a global Islamic fundamentalist rule are specific goals of the Iranian regime. It is in pursuit of these goals that the Iranian regime instigates crises in the Middle East, most notably in Lebanon, Palestine and Iraq. As has been said by the President-elect of the NCRI, the solution is neither war nor appeasement. The solution is to defeat Islamic fundamentalism by strengthening and supporting the PMOI. To achieve this goal, the west must adopt a principled policy towards the Iranian regime and the Iranian Resistance. The West must adopt a firm policy towards the Iranian regime over its human rights abuses, support for terrorism, interference in Iraq and pursuit of nuclear weapons.

At the same time, the West must support and engage in dialogue with the Iranian Resistance, which represents a tolerant, progressive and democratic Islam. This means the PMOI must be de-proscribed and the rights under international law of its members in Ashraf City, Iraq must be respected.