Why Did Tehran Go Ballistic Over a Washington Conference? 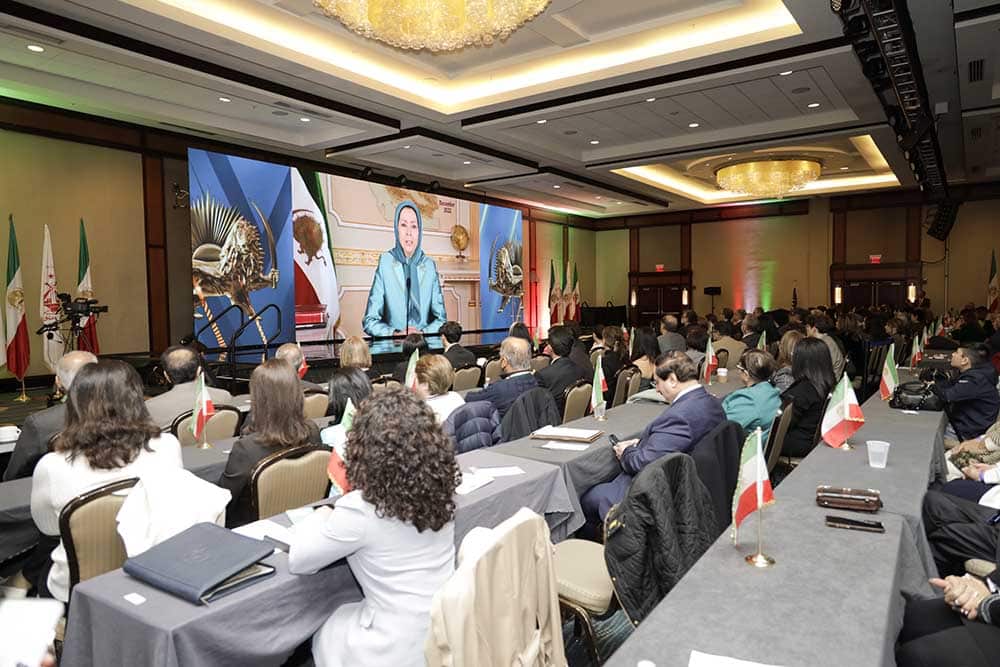 On Saturday, a bi-partisan conference in Washington, D.C., was held in solidarity with the Iranian people’s democratic revolution and their organized Resistance movement. A few hours after the event, Tehran burst into a series of hysterical reactions.

Saturday’s conference featured Mrs. Maryam Rajavi, the president-elect of the National Council of Resistance of Iran, as its keynote speaker. Renowned American politicians from both sides of the aisle, including former United States Secretary of State Mike Pompeo, former US Secretary of Commerce Gary Locke, former Director of the Office of Public Liaison Linda Chavez, former US Ambassador-at-Large for International Religious Freedom Sam Brownback and former US Airborne Corps General Jack Keane.

The Iranian regime’s foreign minister, Hossein Amir-Abodollahian, was the first official to react. In response to a reporter’s question regarding the conference in Washington, D.C., and whether there is still hope for negotiations with the U.S. to revive the 2015 nuclear deal, Amir-Abdollahian angrily described the main Iranian opposition group, the Mujahedin-e Khalq (MEK), and Secretary Pompeo as “expired politicians,” and quickly left the conference.

A few hours after, Iran’s state TV channels started broadcasting rather pathetic remarks of Esmail Ghaani, the Revolutionary Guards (IRGC) Quds Force commander. In his statements, a shaking and terrified Ghaani kept yelling in agony while insulting Mrs. Rajavi and the Iranian opposition and accused all European countries of having collectively conspired against the regime. 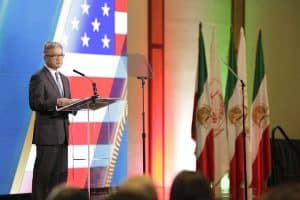 “Gary Locke, former U.S. Minister of Commerce, said he was honored to follow Maryam Rajavi’s plans, which have been ratified by over 250 members of congress from both parties. Linda Chavez, the White House former Public Relations chief, said Rajavi has been leading this movement for a long time,” the state-run Jam-e Jam TV showed a so-called special report from Saturday’s conference on December 18.

“The former U.S. Secretaries of State and Commerce, without mentioning the MEK’s crimes, claimed that by having Maryam Rajavi as president, a free and democratic society will form in Iran,” channel 2 of Iran’s state TV reported on Sunday.

The State TV channel 6 interviewed a notorious torturer, Javad Hasheminejad, asking him about the message that the December 17 conference conveyed.

“They showed they have double standards regarding freedom. Their claims of freedom go hand in hand with terrorism and chaos. In the video [of the conference] you showed, they rightly said the MEK enjoys vast support in the U.S. House of Representatives, as it does in Europe,” he responded.

These remarks and programs also indicate the regime’s fear of its organized opposition’s role in the current uprising. They reflect the Iranian regime’s supreme leader, Ali Khamenei, total desperation and deadlock.

Khamenei couldn’t hold himself for long and rushed to the scene on Tuesday to warn his forces about the regime’s archenemy, the MEK.

“The youth know little about the MEK. We have not been active enough in this regard. We should’ve better reflected the reality because many of our youth do not know about the MEK,” he said, according to State TV on December 20.

Khamenei speaks of his regime’s failure and shortcomings in airing propaganda against the MEK, while in the last four decades, the regime has used its full potential to tarnish the MEK’s image, trying to portray the viable alternative as a “fringe grouplet,” with “no popular support.”

A few weeks after the major Iran protests in November 2019, Iran’s ruling theocracy produced ten so-called documentaries and TV series against the MEK. One of these documentaries, “Sar Cheshmeh,” (Persian for ‘origin’ or ‘main source’) had 20 chapters of 50 minutes.

Khamenei has used every opportunity and means he possesses, including the State TV, the so-called “Islamic Development Organization,” Ministry of Intelligence and Security (MOIS), while squandering billions of dollars of national wealth to produce at least 500 books, hundreds of movies and TV series, documentaries, and tens of thousands of hit-pieces to smear the MEK’s image.

Besides, religious fascism has launched brutal oppression, killing, imprisoning, and torturing tens of thousands of MEK members and supporters. In the summer of 1988 alone, 30,000 political prisoners, mostly MEK members, were hanged in a few months. According to the regime’s judiciary, the slightest connection with the MEK is punishable by death. Since the beginning of the current uprising in September, Khamenei has repeatedly ordered his thugs to “not show mercy” to those arrestees connected with the MEK.

Yet, Khamenei’s efforts have failed, as according to his regime officials, more youth are joining the MEK’s Resistance Units Network. Besides, the Iranian Resistance’s strategy to topple this regime and establish a democratic country has been widely welcomed by Iranians from all walks of life, as their approach of targeting everything the regime stands for has become mainstream.

“In the current situation, the enemy’s goal is to attack the holy system of the Islamic Republic of Iran, to undermine the order and security of the people, and to disturb the public opinion in all domains, including economic, political, cultural, etc. The recent sedition was completely directed and organized to overthrow the state. Trying to exploit fake seditions, the enemies were looking for street riots, attacks on public and government property,” the state-run Tasnim News Agency quoted Hossein Ashtari, the commander-in-chief of the police, on December 17.

Khamenei is indeed terrified, and he sees his disastrous failure in controlling Iran’s restive society and the revolution in the making, despite killing at least 600 Iranians in the uprising and executing two arrested protesters in recent days.

The recent hysterical reactions by regime officials to the Iranian opposition’s advancing both inside and outside Iran lays bare the real face of a vulnerable and moribund system, which has lost its balance due to the nationwide uprising and the Iranian Resistance’s leading role despite Tehran’s attempts to quash protests.

The world should respect and embrace the change on the horizon in Iran by supporting the Iranian people’s aspirations for freedom and democracy and recognizing their right to self-defense and self-determination of their future.

As Mrs. Rajavi emphasized in her message to Saturday’s conference, “Iran’s people have risen to defeat the monster of repression and terrorism. They have chosen to pay the price of freedom with their blood. May the world rise in solidarity.”

Iran’s people have risen to defeat the monster of repression and terrorism. They have chosen to pay the price of freedom with their blood.
May the world rise in solidarity.#IranRevolution#FreeIran pic.twitter.com/lgWJx8PQ4g