With Clenched Fists Towards the Regime’s Embassy in London, Iranians Cry To Support Their Compatriots in Abadan 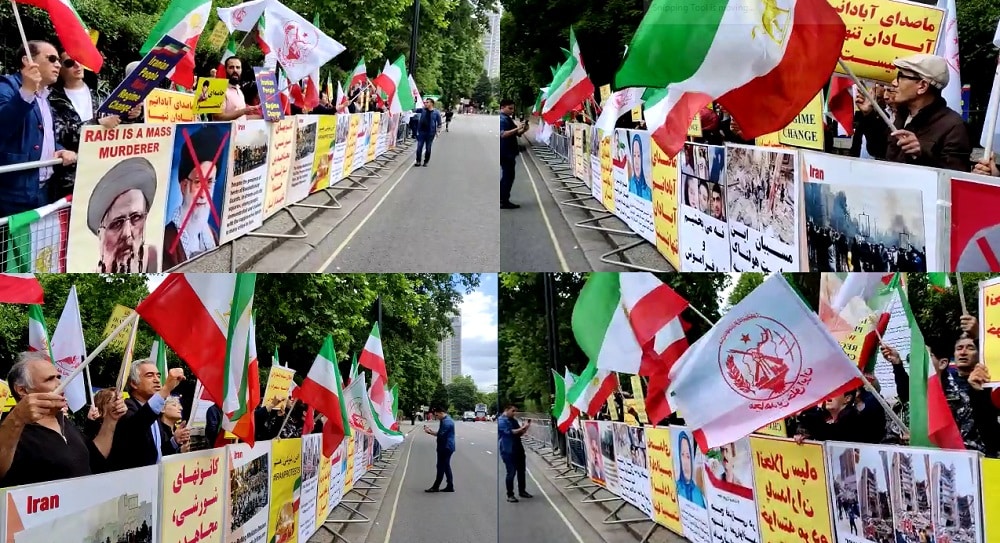 Supporting the enduring protests across 13 provinces in Iran, supporters of the Iranian Resistance held a rally on Saturday, 28 May, in front of the regime’s Embassy in London. The participants expressed their solidarity with their fellow countrymen and women in the city of Abadan, where a 10-story called the Metropol Complex collapsed on 23 May, killing at least 29 people according to official accounts.

While many residents are still trapped under the rubble, local officials insisted to call off rescue efforts and wanted to demolish the remaining parts of the building. Instead of merely focusing on sending rescue teams and being terrified of the people’s anger, the regime has mostly dispatched security forces to confront the devastated population.

However, people remained defiant and took to the streets to protest and called out the regime’s officials and their corruption and tyranny.

In recent days, the protests have spread to other provinces and cities including  Abadan, Ahvaz, Khorramshahr, Behbahan, Omidiyeh, ‌Bagh Malek, Sarbandar, Mahshahr, Yazd, Shahinshahr, and dozens of villages in Khuzestan.  The cities of Tehran, Shahr-e Ray (south Tehran), Qom, and Andimeshk were also the scenes of anti-regime protests tonight, with people chanting “Death to the dictator, Khamenei is a murderer, his rule is null and void.”

The Anglo-Iranian community called on the UK government and the international community to support the popular protests in Iran and to recognize the right of the Iranian people to end the religious dictatorship and establish a free, democratic Iran.

Calling on the United Nations and its member states, Iranians demanded decisive action to end impunity for the regime’s officials by implementing existing international law and mechanisms to hold the regime’s leaders to account for crimes against humanity.

Supporting the enduring #IranProtests across 13 provinces, supporters of the Iranian Resistance held a rally on Saturday, 28 May, in front of the regime’s Embassy in #London. pic.twitter.com/4iVsELbTw2