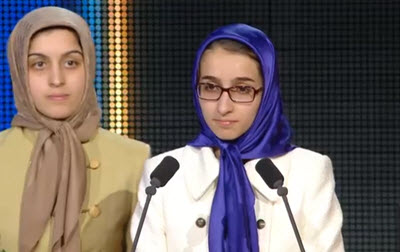 NCRI – The young generation of Iran desire freedom from religious tyranny, says a teenage dissident who recently fled Iran and has joined the ranks of the Resistance movement.

Iranian opposition activist Paria Kohandel, 18, made the remarks at the “Free Iran” convention in Paris earlier this month. Paria’s father Saleh Kohandel is a political prisoner in the notorious Gohardasht (Rajai-Shahr) Prison in Karaj, north-west of Tehran, over his support for the main Iranian opposition group, the People’s Mojahedin Organization of Iran (PMOI, Mujahedin Khalq, MEK).

“I used to watch this gathering every year when I was in Iran. I used to tune into the opposition’s television channel (Simay-e Azadi) to catch a glimpse of the annual [Free Iran] gathering. I could only watch it on TV. But, being personally present here and seeing the incredible size of it firsthand is totally different than watching it on TV. It’s an absolutely different experience,” Paria Kohandel said at the huge gathering in Paris on July 9.

“I’m happy to have developed a relationship with you, friends of the Iranian Resistance, who have gathered here from all corners of the world, forming an endless sea that’s hungry for freedom. … I’m here to be the voice of my father, who is my source of pride and my hero. He has spent the last 10 years in prison because of his commitment to bring freedom to our generation. He is resisting and persevering in the clerical regime’s prisons.”

“I was eight when they arrested my father. For 10 years, I could only see him for 20 minutes at a time each week, with a glass panel separating us. But, we made lots of memories together in those 20 minutes. He was with me when I was sad, he was with me during happy times, and he laughed with every fiber of his being. … The sound of his laughter still echoes in my ears.”

“Even the static of the prison phone couldn’t censor his laughs. When I was sad, it was my dad who consoled me. But, when he was sad, I had nothing to say to ease his pain. Like the moments when the regime took his cellmates and friends for execution.”

“My dad used to say: In prison, there are lots of 17 or 18 year old teenagers who have been sentenced to death or long-term imprisonment on petty charges. He said he would see his own daughters in their faces.”

“I wish those teenagers were here so they could freely scream the things they haven’t been able to say under this regime … so they could say it without being censored.”

“This is a generation that has watched public executions and experienced the pain of child labor through all its life; a generation that was unwittingly thrown into a war that is still in progress. My country Iran is at war; a war for freedom; a war for being able to breathe freely; a fight to create an Iran without prisons and executions.”

“The regime tried constantly to make us become our own enemies while trying to convince us that we’re all alone in this fight. But we are not alone. We have something to lean on, to count on, which taught us over these years … that one can rebel against suppression; that we can be free.”

“In the process of leaving Iran, I met Iranian immigrants who were with me every step of the way. In those though times, without much help, I didn’t even think that I would be able to see them again. But, amazingly, I met some of them here today. Like me, they’ve found what they’d been looking for.”

“We want to show our commitment and accept new responsibilities to overthrow the dictatorship. This is our responsibility. Because we have felt with every fiber of our being what these henchmen have done to our country.”

“We will free Iran. Because [Iranian opposition leader] Maryam Rajavi, whose name is banned in Iran because it is a source of fear for the ruling regime, has taught us that ‘we can and we must’.”

“We can and we must take this glowing light to Iran,” Paria Kohandel added.

Renowned Iranian dissident Saleh Kohandel was arrested on March 4, 2007 and sentenced to 10 years imprisonment for supporting the PMOI (MEK).
The last time Paria saw her father was in Gohardasht Prison last year, one month before she fled Iran.

Previous articleCrackdown on “un-Islamic” women’s clothes in Iran
Next articleLord Alton: Iranian Resistance will guarantee freedoms for Christians in the future Iran