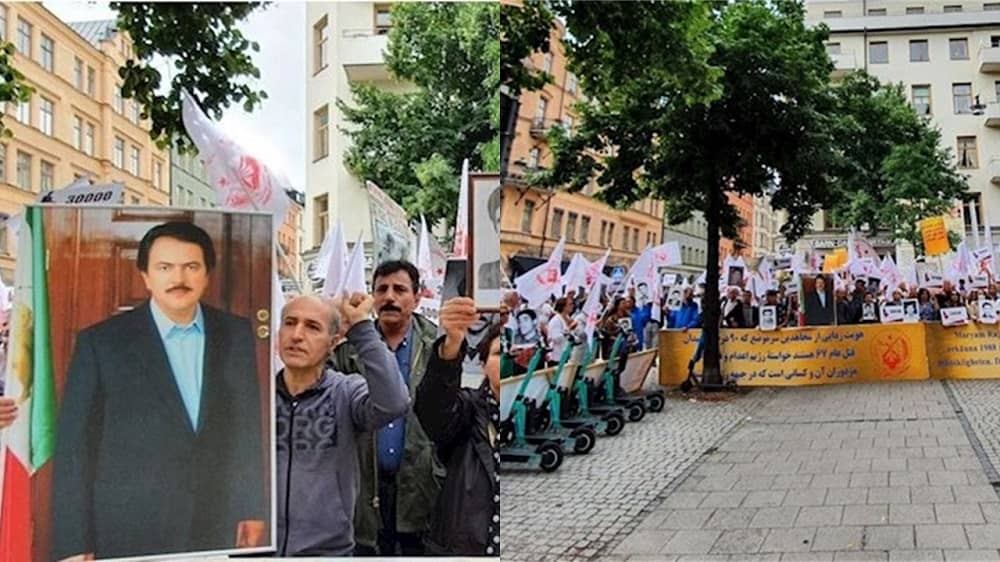 The trial opened in Sweden’s capital Stockholm Tuesday of Hamid Noury, a henchman of the 1988 massacre of political prisoners.
As the trial started, hundreds of supporters of Iran’s main opposition movement, the People’s Mojahedin Organization of Iran (PMOI/MEK), protested outside Stockholm’s District Court.

#Iran: As the trial opened in Sweden's capital Stockholm Tuesday of Hamid Noury, one of the hangmen of the #1988massacre, hundreds of supporters of the People's Mojahedin Organization of Iran (PMOI/MEK) protested outside Stockholm's District Court.#ProsecuteRaisiNow #MEK pic.twitter.com/peihkMX0Y3

The 1988 massacre of political prisoners

In July 1988, then the Supreme leader of the Iranian regime, Ruhollah Khomeini, issued a decree, stating that all the political prisoners who remain steadfast in their support for the Iranian opposition movement, the People’s Mojahedin Organization of Iran (PMOI/MEK) should be executed. Further facts and details established that the regime had planned such a massacre long before the massacre actually took place.

Upon Khomeini’s fatwa, ‘Death Commissions‘ were formed in Tehran and across Iran. The prisoners were brought before the Commission (three to four members), and their fates were decided in a few minutes. Political prisoners who refused to abandon their beliefs were executed.
In the course of a few months, at least 30,000 political prisoners were massacred, 90 percent of them from the MEK. The victims, many of whom had already spent several years of imprisonment and had even finished their terms but not been released, were buried in secret mass graves.
Almost all of the Iranian regime’s leaders and senior officials were implicated in the massacre. The perpetrators have enjoyed total impunity ever since.

Hamid Noury (also known as Hamid Abbasi) was one of the henchmen involved in the massacre as the assistant to the deputy Prosecutor in Gohardasht Prison in Karaj (west of Tehran). He was the executioner of a large number of prisoners. Several years ago, the Iranian Resistance identified him as one of the perpetrators of the 1988 massacre.
Before that, he was a member of the Revolutionary Guard (IRGC) and worked for many years as an interrogator and torturer in the notorious Evin Prison in Tehran. In 1988, Noury was transferred to Gohardasht prison in Karaj, west of Tehran, where he played an active role in the massacre of political prisoners on the then supreme leader Rouhollah Khomeini’s decree. 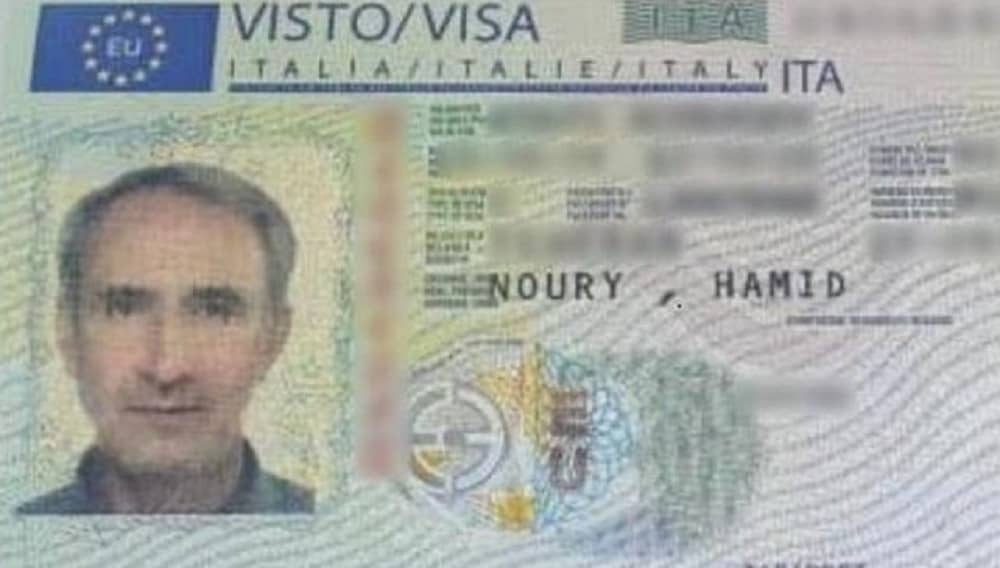 Noury was specifically responsible for leading prisoners to the “Death Commission” and then from there to a location in prison, where they were executed. He personally executed several prisoners. Many testimonies by the survivors of the massacre confirm that he told PMOI supporters that all of those continuing to support the PMOI would be executed. To break the morale of the prisoners, he would sometimes distribute pastry after a group of prisoners were executed.

The arrest of Hamid Noury in Sweden

In November 2019, upon his visit to Sweden, he was arrested by the Swedish authorities. After 21 months of investigation, he was indicted on July 27, 2021. His trial is scheduled to start on August 10.
In the course of the investigation, the members and supporters of the MEK, who were witnesses to Noury’s crimes, testified before the Swedish authorities and provided ample evidence and documents. Most of the 35 plaintiffs in Noury’s case are members and supporters of the MEK. Many of them witnessed Noury in the corridor of death in Gohardasht prison, where prisoners were lined up to be taken to the execution hall.

Prosecutors at the District Court of Stockholm issued an indictment against Hamid Noury on July 27, 2021. The investigation has been supervised since the beginning by the Senior Public Prosecutor, Kristina Lindhoff Carleson. The indictment refers to the
fatwa (religious order) by the then supreme leader of the regime Ruhollah Khomeini that states “all prisoners in the Iranian prisons who belonged to / sympathize with the Mujahedin and who were faithful/loyal in their beliefs should be executed.
Shortly afterward, mass executions of supporters/sympathizers of the Mujahedin who were prisoners in the Iranian prisons began.”
According to the indictment, “Between July 30, 1988, and August 16, 1988, Hamid Noury, as assistant prosecutor or other similar role, in cooperation and collusion with other perpetrators at Gohardasht Prison in Karaj, Iran, executed a large number of prisoners who were members or sympathizers of the Mujahedin.

Hamid Noury’s participation in the executions has consisted of him together and in agreement/consultation with others organizing and participating in the executions by, among other things, selecting which prisoners would be brought before a court-like commission (committee) that had a mandate under the fatwa/order to decide which prisoners were to be executed. Noury took these prisoners to the so-called death corridor and guarded them there, read out the names of the prisoners to be brought into the committee, brought the prisoners into the committee, provided written/oral information about the prisoners to the committee, read names of the prisoners who were to be taken to execution, ordered the prisoners to stand in a line to be escorted to the execution site and also escorted prisoners there after which the prisoners were deprived of life by hanging. Hamid Noury has also himself on some / some occasions attended and participated in the executions.”
According to the indictment, Hamid Noury is also charged with the murder of prisoners affiliated with other political groups. Some of their family members have been accepted as plaintiffs in this case.
The indictment and case file contain texts of interviews and documents that dozens of members and sympathizers of the MEK have presented as witnesses or plaintiffs in interviews with the Prosecutor’s Office. Interviews with 16 MEK members in Ashraf 3 in Albania were conducted through video conferences, and other interviews were conducted either in Sweden in person or in other countries via video conference. These individuals are survivors of the massacre, who witnessed the crimes committed by Hamid Noury in the death corridor in Gohardasht Prison during the 1988 massacre or are members of the families of executed.

In recent years, as the public campaign for justice for the victims, led by the Iranian Resistance, most notably the MEK inside Iran, has gained momentum, the Iranian regime has resorted to a systematic campaign to destroy even the secret mass graves to hide any evidence of the crime, which a number of pre-eminent jurists have described as one of the most egregious cases of crime against humanity in the since World War II.

On September 3, 2020, seven United Nations Special Rapporteurs wrote to the Iranian authorities stating that the 1988 extrajudicial executions and forced disappearances of thousands of political prisoners “may amount to crimes against humanity.” Adding, should the regime “continue to refuse to uphold its obligations under international human rights law, we call on the international community to take action to investigate the cases including through the establishment of an international investigation.”
Amnesty International’s secretary-general said in a statement on June 19, 2021: “That Ebrahim Raisi has risen to the presidency instead of being investigated for the crimes against humanity is a grim reminder that impunity reigns supreme in Iran. In 2018, our organization documented how Ebrahim Raisi had been a member of the ‘death commission’, which forcibly disappeared and extrajudicially executed in secret thousands of political dissidents in Evin and Gohardasht prisons near Tehran in 1988. The circumstances surrounding the fate of the victims and the whereabouts of their bodies are, to this day, systematically concealed by the Iranian authorities, amounting to ongoing crimes against humanity.”

Join us in urging world leaders including #EU @enriquemora_ to speak out against impunity for crimes against humanity related to Iran's #1988Massacre and call on @UN_HRC to set up an investigative & accountability mechanism to deter further bloodshed & secure justice for victims. pic.twitter.com/UX8LSgAugu

Javaid Rehman, the UN Special Rapporteur on the situation of human rights in the Islamic Republic of Iran, said on June 29, 2021, that over the years his office has gathered testimonies and evidence of the state-ordered executions of thousands of political prisoners in 1988. He said his office was ready to share them if the UN Human Rights Council or another body sets up an impartial investigation, adding: “It’s very important now that Mr. Raisi is the president-elect that we start investigating what happened in 1988 and the role of individuals.”
In May 2021, a group of more than 150 rights campaigners, including former senior UN officials, Nobel laureates, and former heads of state or governments, called for an international investigation into the 1988 killings.

Previous article
Thirty Seven Executions in Iran Following Raisi’s Presidency, Is the Result of Impunity
Next article
Iran: Protests Erupt In Junqan After Arrest And Beating Of Two Residents