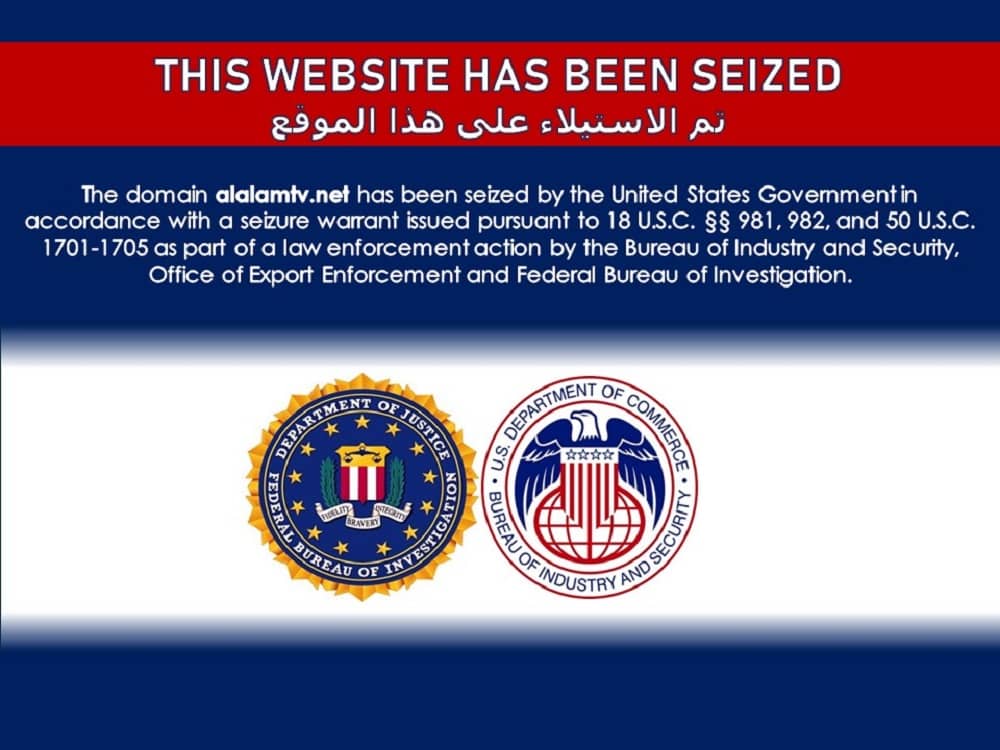 This week, the US seized a number of websites affiliated with the Iranian regime’s propaganda networks early, prompting Iranian authorities to shift media outlets such as the English-language Press TV to different domain names with Iran-specific extensions.

According to AP, “American authorities seized a range of Iran’s state-linked news website domains they accused of spreading disinformation, the U.S. Justice Department said Tuesday, a move that appeared to be a far-reaching crackdown on Iranian media amid heightened tensions between the two countries.”

Also, according to British media, the Henry Jackson Society, a London-based Think Tank, published a report last month which details the influence of Iranian fake news networks over British websites and the British public. The report joins various other pieces of evidence for the ongoing proliferation of Iranian government propaganda not just in the United Kingdom but throughout the world. It comes only five months after the United States indicted a Massachusetts political scientist for operating as a paid agent of the Iranian regime for more than 13 years, and four months after a former operative in Iran’s online disinformation campaigns wrote a letter to the United Nations Secretary-General offering to testify on the matter “before any court or impartial authority.”
Collectively, these examples demonstrate the multi-layered strategy employed by the Iranian Ministry of Intelligence and associated institutions in spreading their talking points on a global scale. The potential effectiveness of fake news websites stems from the faux credibility provided to those sites by their association with entities that spread the same or similar talking points through more well-established media.

In some cases, those entities boast impressive, genuine credentials. The subject of January’s indictment, Kaveh Loftolah Afrasiabi, was gainfully employed as a political scientist and was published in research journals and journalistic outlets during the time when he received more than a quarter of a million dollars in illicit compensation from the Iranian government.

In February, an Iranian expatriate sent a letter to the United Nations Secretary-General in which he describes joining the leading Iranian opposition group, the People’s Mojahedin Organization of Iran (PMOI-MEK) in 2003, then leaving in 2016 after relocating to Albania along with a core MEK community that had been struggling to survive in Iraq since the withdrawal of U.S. forces from that country.

In that letter, Hadi Sani-Kani began by stating that he joined the PMOI in 2003 and left in 2016, two months after he and hundreds of other former residents of the group’s community in Iraq were relocated to a new compound in Albania. “Two weeks later, I went to the Iranian embassy in Tirana,” he explained. “For four years I fell into a trap set by the Iranian regime’s Ministry of Intelligence and Security (MOIS) and its Iranian embassy in Albania. During this period, I began to collaborate with official agents of the MOIS… They used me in demonization, espionage, intelligence gathering, and reconnoitering schemes to carry out terrorist actions against the PMOI.”

The letter went on to express profound regret for contributing to the spread of propaganda that defamed MEK members as terrorists and cultists while knowing that “not a single word of these utterances was true.” But more importantly, it emphasized the fact that Sani-Kani was only a tiny part of a much larger operation, which relied both on actual former members of the organization who were coerced into cooperation with the MOIS and on intelligence operatives who falsely portrayed themselves as former members or as independent experts, in order to gain some semblance of legitimacy when pitching articles to global news outlets or making themselves available for media interviews.
Sani-Kani’s letter also touched upon the phenomenon of networks of Iran-friendly journalists and academics who operate on the margins of the MOIS content farms. These individuals lend their own brand of legitimacy to talking points that either defend the Iranian regime’s position in global disputes or cast aspersions on the pro-democracy Resistance movement and thus help to give the impression that there is no viable alternative to the existing theocratic system. Afrasiabi is a prime example of this sort of contributor to the regime’s disinformation campaign, but his indictment is unfortunately no indication that Western authorities are undertaking a broader effort to undermine sources of Iranian propaganda.

Quite to the contrary, even American law enforcement has seemingly avoided close scrutiny of persons who have long been suspected of ties to Iranian intelligence, including persons who have been flagged for such scrutiny by certain US lawmakers. Afrasiabi himself shared bylines with Trita Parsi, the founder of the National Iranian-American Council, in the years before his arrest. This fact seems to boldly underscore the points raised in a 2020 letter to the US Department of Justice in which three Senators observed that NIAC’s “innocuous public branding masks troubling behavior” and potentially reveals the organization as a de-facto lobby for the Iranian regime.
In wake of Afrasiabi’s arrest, nine members of the House of Representatives published a similar but more broadly focused letter, urging the DOJ to investigate anyone who might have received illicit payments from Tehran, with an eye toward prosecuting them and exposing their activities. There was no immediate sign of an increased focus on this topic after the letter was received, and Parsi’s continued ability to present himself as an independent voice in global media suggests that no such efforts are forthcoming.

This is certainly a shame because the sorts of online networks highlighted by the Henry Jackson Society will inevitably make it more difficult to uproot Iranian disinformation over time. The key problem is the self-reinforcing nature of the regime’s multi-tiered foreign propaganda strategy. Even if Parsi and all other suspected lobbyists for the Iranian regime were removed from the media landscape tomorrow, it would have little impact on the circulation of their talking points through both legitimate and demonstrably fake news outlets where they have already taken hold.
The process of uprooting that sort of disinformation will ultimately need to be as multi-layered as the strategy for spreading it in the first place. Media outlets must train their journalists to recognize Iranian talking points and sources with likely ties to the Iranian regime. Law enforcement agencies must keep tabs on those same sources and make a more concerted effort to subject paid operatives to the same consequences as Afrasiabi is facing. And global tech companies must work with Western governments to take down deceptive Iranian websites and social media websites every single time they crop up.

Previous articleIran’s Lacks Political Legitimacy At Home And It Should Be Rejected On The World Stage
Next articleIran: Long History of Resistance Show Tehran’s Vulnerability After Election