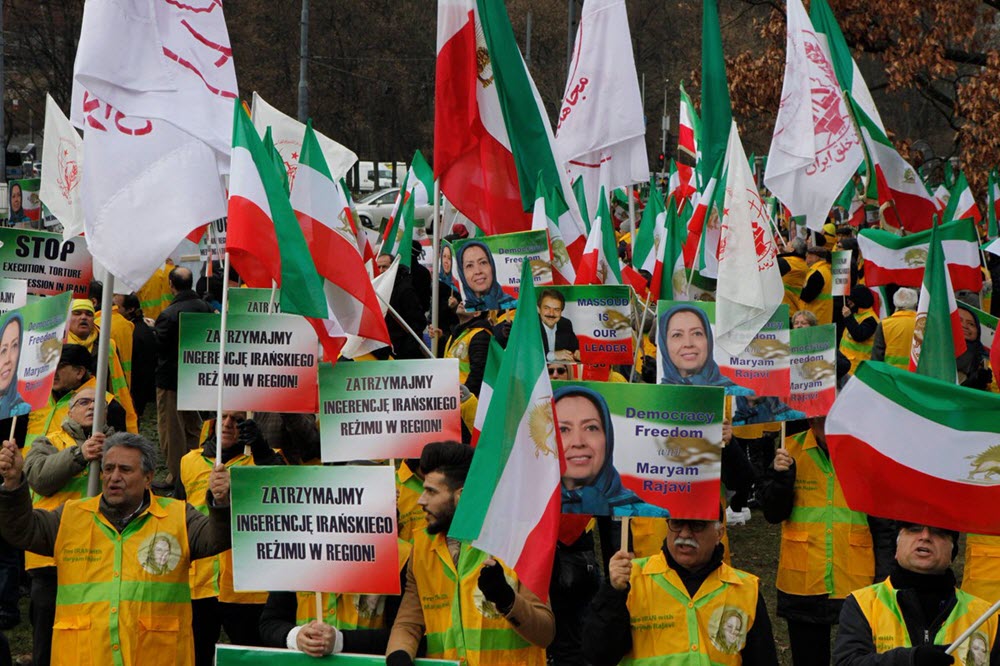 A large group of Iranians supporters of the National Council of Resistance of Iran (NCRI) held a rally on Thursday for the second day outside the Warsaw Summit on Middle East calling for support for democratic change in Iran under the leadership NCRI’s Maryam Rajavi.

Protesters in Polish capital chanted “Appeasement no; regime change yes” as government delegations attend the Warsaw Summit that opened on Wednesday. The protesters declared their solidarity with the anti-regime protests taking place throughout Iran.

They expressed their support for Iranian opposition leader Maryam Rajavi’s 10-point plan for a free republic base on separation of religion and state, gender equality and a non-nuclear Iran.

“The policy of blacklisting the Iranian regime’s criminal institutions and figureheads will be effective only when the IRGC is placed on the terror lists of the U.S. and the European Union as a whole entity.

“The IRGC is in command of the regime’s terrorist mercenary groups and their disastrous bloodletting in the region; it runs the regime’s missile program, nuclear weapons activities, and cyber-attacks, and it is in charge of cracking down on the populace and plundering the country’s assets.

“The Revolutionary Guard Corps is the backbone propping up the clerical regime. So, it must be designated as a terrorist force without a delay.

“Accordingly, I hereby declare the demands of the people of Iran and the Iranian Resistance, as the following:

1. Blacklist the Iranian regime’s Revolutionary Guard Corps (IRGC) and Ministry of Intelligence and Security (MOIS) by placing their whole entities on the terror lists of the U.S. and European Union;

2. Expel the agents of the Iranian intelligence services and the terrorist Quds Force from the U.S. and Europe;
3. Refer the dossier on violations of human rights in Iran to the UN Security Council;

4. Refer the dossier on the 1988 massacre of political prisoners in Iran to the International Criminal Court;
5. Oust the mullahs’ illegitimate regime from the U.N. and recognize the representatives of the Iranian people’s just Resistance;

6. Evict and sweep away the forces of Iran’s ruling religious fascism from Syria, Iraq, Yemen, Lebanon and Afghanistan;

7. Compel the government of Iraq to compensate for the properties, equipment, arms and base camps of the PMOI/MEK and the National Liberation Army of Iran;

Senator Ryszard Majer, a prominent member of the Polish Senate, and Vice President of the Foreign Affairs Committee from the PIS party, addressed the Free Iran rally in Warsaw: We respect freedom and solidarity. Are those values important to you? Yes, every nation needs freedom and solidarity, freedom to decide for themselves. Also in Iran freedom for Iranian people is necessary for the entire world.

As a Pole I understand this. For many years there was no freedom of assembly, no freedom of speech, for all of those who wished for change. Today I admire all of the efforts of Maryam Rajavi who works for solidarity and well-being in Iran.

Those actions are very important, they are conducted in a peaceful manner. I have met with people who work with her, who are dedicated to change. They’re belief in respect for life and solidarity are not just empty words. We can talk about the future, looking back, thanks to your efforts your nation will be free and democratic and also full of solidarity.

Former New York Mayor Rudy Giuliani said in a speech: It’s a great honor for me to be here with you to make a very important point to the government officials attending the Warsaw Summit. In order to have peace and security in the Middle East, there needs to be change of the theocratic regime in Iran. It must end. The Iranian regime is the greatest source of dissention. I commend Maryam Rajavi for her courageous leadership in her struggle for a free and democratic Iran. The Ayatollah’s regime is the number one state sponsor of terrorism not only in the Middle East, but in the whole world.

Marcin Święcicki, a Member of the Polish Parliament and former Mayor of Warsaw and a former minister for foreign economic relations, also addressed the rally on Wednesday. He said: The NCRI movement has a 10-point plan which among other things calls for abolishing the death penalty. We want to see the establishment of peace and democracy in Iran.