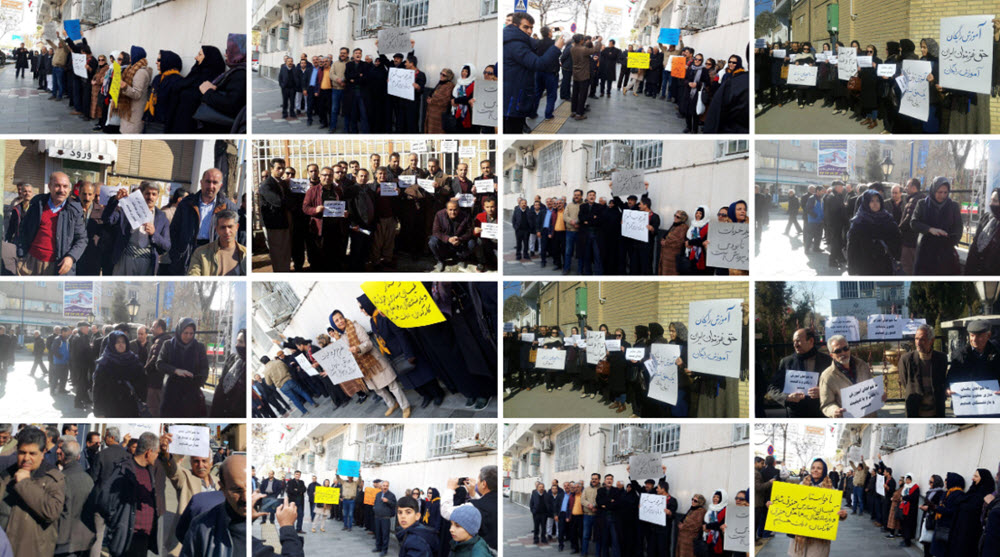 Iranian teachers and educators took to the streets in a nationwide protest on Thursday, February 14; their fourth in this Persian year, which began on March 21, 2018.

At the time of writing, protests were being held in Mashhad, Kermanshah, Urmia, Ardabil, Khorramabad, Sanandaj and Marivan, with both working and retired teachers in attendance, as has been the case in the three previous strikes this year.

The teachers were demanding the full payment of their delayed salaries, the freedom of imprisoned teachers arrested during previous protests for peaceful activism, and free education for all children, among other things.

In Kermanshah, western Iran, Iranian teachers held a massive rally outside the Department of Education and chanted “Working and retired (teachers), unite!”. Women were especially active during these protests, although women are at the forefront at the anti-regime uprising anyway.

In Sanandaj, teachers held up signs with the slogan “One must cry for a society whose teachers are jailed” and with demands for free education for all children in Iran.

While teachers gathered outside the Department of Education in Mashhad, Urmia and Marivan.

In Urmia, the gathering was held despite the presence of the security forces, who are often dispatched to peaceful protests because the Regime fears that the protests will spread, much as they did in December 2017. According to an eyewitness, the number of troops sent to disperse the crowd was far bigger than the number of participants. Still, a number of teachers were arrested.

Iranian teachers have previously held nationwide protests, strikes, and sit-ins in May, October, and November.

In November, they demanded decent salaries, respect, health insurance, free education for Iran’s children and the release of jailed teachers arrested in October.

In October, the strike was held in over 60 cities in 26 provinces. They protested inflation, high prices, dwindling purchasing power of teachers, privatisation of education and receiving tuition from students, as well as fraud and embezzlement in the Teachers’ Reserve Fund.