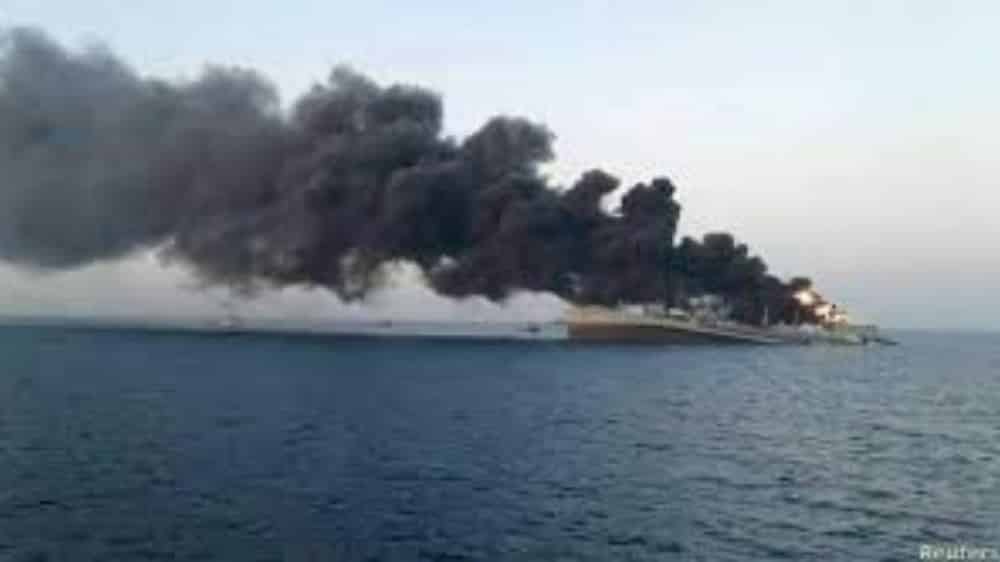 A week ago, a tanker was attacked off the coast of Oman. Meanwhile, the Iranian regime officials continue to deny their involvement, even as more and more international voices weigh in to affirm that all available evidence points to Tehran.

On Friday, foreign ministers from the G7 issued a joint statement that underlined the regime in Iran is threatening international peace and security and noted that the July 29 attack constituted a “clear violation of international law.” The statement coincided with the release of an analysis by US Central Command which determined that the tanker in question had been damaged by an explosives-laden drone with defining features of Iranian manufacture.

The UN Security Council discussed the incident behind closed doors in the wake of that report, and the British ambassador to that body, Barbara Woodward, specifically identified the drone as a Shahed-136. It was reportedly similar to those unmanned aerial vehicles that were used in a series of strikes on Saudi oil infrastructure in 2019, which briefly halved the nation’s output. The Iran-backed Yemeni militant group known as the Houthi took responsibility for those attacks, but many experts concluded that the group was incapable of reaching so deep into Saudi territory on its own.

Iran has been credited with extending the range and power of military capabilities for a variety of regional proxies, particularly in recent years. The G7 statement specifically referenced these proxies and “non-state armed actors” alongside the regime’s own behavior as the source of major international threats.

“We call on Iran to stop all activities inconsistent with relevant U.N. Security Council resolutions, and call on all parties to play a constructive role in fostering regional stability and peace,” the statement added, albeit without specifying consequences for the Iranian regime’s failure to comply or clarifying precisely what type of role is expected from which relevant parties.

On Sunday, the European Union’s head of foreign policy, Josep Borrell, effected similar vagueness, writing on Twitter that the “EU condemns in the strongest terms the unlawful attack committed on the merchant vessel Mercer Street.” He went on to promise the continuation of intensive diplomacy, but this was met with familiar criticism in light of the clear escalation that the Mercer Street attack signifies.

Two of the vessel’s crew members – one British and one Romanian – were killed in the blast, which left a six-foot diameter hole in its pilothouse.

The regime’s increasing terrorist activities require more assertive gestures from the likes of the EU and the United States. These threats would continue since Ebrahim Raisi became the new president of the regime.

Tehran’s malign activities, such as the recent attack on tankers would increase with Raisi as its president, both at home and abroad, and the Mercer Street attack was a precursor to that escalation. However, Saeed Khatibzadeh, the spokesperson for the regime’s Foreign Ministry, specifically pointed to the proximity of the attack to Raisi’s August 5 inauguration in an effort to further the regime’s denials and to claim that the incident was “stage-set” by Iran’s enemies to serve as a false flag.

The regime used the same excuse once its diplomat-terrorist, Assadollah Assadi, and his three accomplices were arrested just before planting a bomb at the Iranian opposition’s rally in France in 2018. Assadi recently was convicted to 20 years in prison on terrorism charges.

Furthermore, any suggestion that western countries, mainly the EU countries to foster conflict with Iran is undermined by the fact that the EU and its member states remain outwardly committed to the appeasement policy even in the wake of the fatal July 29 incident. Borrell even went so far as to send Enrique Mora, the deputy political director of the European External Action Service, to attend Raisi’s inauguration.

Mora traveled to Iran while the entire regime’s behavior is worsening and that Raisi’s appointment to the presidency is a blatant expression of the regime’s impunity.

During the massacre of political prisoners in 1988 Raisi played a leading role. The 1988 massacre has been described by many experts as one of the late 20th century’s worst crimes against humanity, but Raisi’s presidential inauguration is part of a long history of Iranian officials being rewarded for this and other human rights violations.

A European presence at that inauguration provides legitimacy to the regime’s president who was rejected by the vast majority of the Iranian people when they sat out the tightly-controlled June 18 sham election in protests. By legitimizing the criminal president of the mullahs’ regime, Western politicians tacitly that Tehran can continue to wreak havoc inside Iran and across the globe.

Many current and former lawmakers and government officials from a variety of Western nations and a variety of political parties have joined the Iranian Resistance in condemning the “appeasement” policy and being directed toward the illusory goal of promoting “moderate” Iranian officials who might oversee the internal reform of the clerical regime.

Ebrahim Raisi represents the direct opposite of this goal, which raises further questions about the value of a Western presence at his inauguration. Raisi has been and most likely will remain the focus of critical statements from Western officials, but these statements, like the statements on Mercer Street, are apparently not backed up by concrete action. Despite the talk by politicians to take a harder stance against the regime’s belligerence, Western states continue to give the regime a free pass for its crimes.